Washington State - With marijuana on sale just blocks away from her downtown Vancouver restaurant, Jenna Eckert is taking a bold step into a legal gray area, inviting customers to come on in and light up. Eckert, the co-owner of Mint Tea in Uptown Village, is one of many business owners in Vancouver and around the state looking for ways to provide a place for pot shop customers to smoke. The legal parameters are vague, but some argue it's possible, though tricky, to open a private club, lounge or partitioned area for marijuana consumption.

At Mint Tea, Eckert allows her customers to bring their own marijuana and smoke in her outdoor seating area under a tent in front of the building. "For now, I just want to support the whole cannabis movement however that can be done," she said. "So, right now it's the tent out there where we tell people you're more than welcome to (smoke)." Justin Dufour, a local software service consultant for marijuana businesses, said he's recently heard from a few others exploring similar ideas.

"There are a lot of people who are interested in setting up smoking lounges, because they could see that being a huge business," Dufour said. "It's a huge economic interest, and it's a tourism interest." On Saturday night, about 100 people showed up to Mint Tea for "New Moon Mystic Eve," a 21-and-older spiritual celebration of the new moon and the zodiac sign Leo. It was the first public "cannabis friendly" event in Vancouver since the city's first pot shop – Main Street Marijuana – opened about two blocks away earlier this month.

Guests paid a $10 cover charge and came dressed in colorful costumes, and dancers put on a show accompanied by two men on drums and another with a wooden flute. Marijuana smoke drifted through the air from pipes and blunts, and Eckert said the night went smoothly with no confrontations with police. Eckert knew she was testing the limits by billing the event as "cannabis friendly" on fliers, but that was the point. She hopes her example will help spur a loosening of the laws on where marijuana can be consumed. "I think the more we can talk about it, it's only a good thing," she said.

Initiative 502, which legalized recreational marijuana in Washington, mandates that it can only be consumed outside the view of the general public. The law bars consumption inside pot shops, and some interpret it as effectively limiting consumption to inside private residences only. Adding to the limitations, the state Liquor Control Board drafted a rule last year that businesses with liquor licenses cannot allow marijuana consumption on their premises. The situation presents a conundrum for tourists coming to get their first taste of legal Washington-grown marijuana: If they don't know anyone who lives in the state, where can they go to legally consume the drug? Dufour said the question highlights the need for smoking clubs. "By not having these establishments, you are actually encouraging out-of-state people to break the law," he said. "They can't smoke in their hotels, so where do you go smoke?"

Despite the limitations, Dufour sees opportunity in the vagueness of the law, and he sees business owners looking to exploit some key loopholes. "As long as you are on private property it doesn't say anything about being commercial or residential, just private property and you're outside the view of the public," he said. "That's all the law really states." Of course, the other law in play is the state's ban on smoking in public places. The law outright bans smoking in places of employment and mandates that any smoking outdoors must be at least 25 feet away from an entrance, exit or any windows of a business.

Some have gotten around the ban by opening private smoking clubs with membership fees. Frank Schnarr, who owns Frankie's Sports Bar & Grill in Olympia, won a legal battle to run a cigarette club on the second floor of his business. Then, after voters passed I-502, he took the club a step further, allowing pot smoking before the state clamped down on the liquor-marijuana combination. Along similar lines, Dufour argues business owners could circumvent the legal restrictions by taking careful steps to operate their businesses as private clubs for marijuana consumption.

To explain his point, Dufour looks to the example of how a friend managed to run a hookah lounge despite the smoking ban. Each day until 5 p.m., the business operated solely as a restaurant, Dufour said. But once 5 p.m. hit, the restaurant would shut down for 15 minutes, and all the employees would clock off before the owner would reopen the place as a hookah lounge. From that point, the lounge would be staffed entirely by volunteers, and customers would pay a membership fee to hang out and smoke tobacco, he said. "As long as you did that, you were considered a private club and you could do whatever you want," Dufour said.

And as long as the consumption remains blocked from public view and no alcohol is allowed, Dufour said he sees this as a legitimate way to run a marijuana club. The conversation about smoking areas also has taken off with the Liquor Control Board and the Washington Restaurant Association, which have been inundated with inquiries about the matter. David Faro, a spokesman for the association, said he sees the state taking the issue up once the Liquor Control Board has finished the cumbersome marijuana retail licensing process.

He's also seen a push to allow marijuana consumption in some restaurants, but if that part of the law ever changes, it won't be anytime soon, Faro said. "Although there's a lot of interest in sort of an Amsterdam-type model – being able to smoke in restaurants – it's not on the table, and it won't be on the table for quite some time," he said. In the meantime, Faro said he already knows of places just blocks away from his office in Olympia where business owners are opening unofficial pot lounges or smoking clubs. 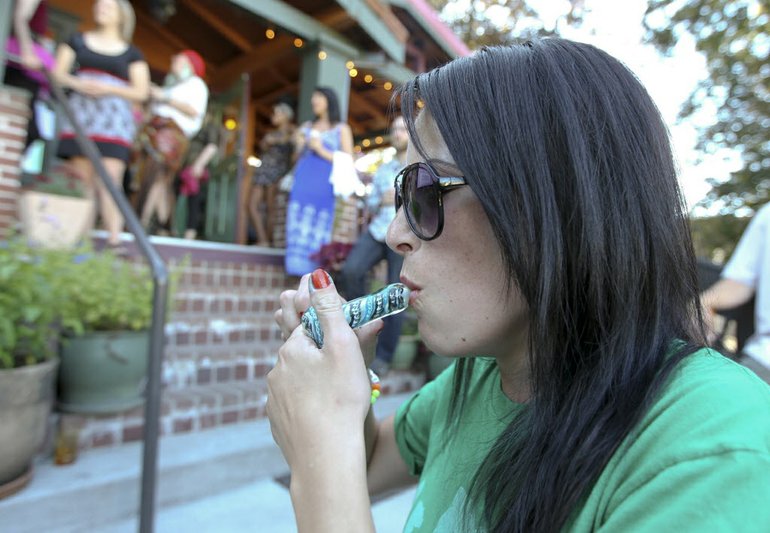 Where Buying Marijuana Is Legal, But There's Nowhere To Smoke It

NV: In Las Vegas, You Can Buy Pot, But There's Nowhere To Smoke It