On the outskirts of Libertad, a small town an hour's drive from Montevideo, barbed wire and guard towers surround a ten-hectare plot of state-owned land. Inside, greenhouses shelter thousands of marijuana plants. These belong to ICC and Simbiosys, the two firms licensed by Uruguay's government to grow cannabis for recreational use. Uruguayans will soon be able to sample their product. Since May 2nd they have been able to register at the post office as prospective customers for the corporate weed, which will be sold through pharmacies from July.

That will be the last and most important stage of a long process. In 2013 the senate voted to legalize marijuana and regulate its production and sale, making Uruguay the first country to do so. (Canada proposed a bill to legalize cannabis for recreational use on April 13th.) Uruguay's goal is to stamp out the black market, controlled mainly by Paraguayan smugglers, without encouraging more consumption. Registered Uruguayans (but not visitors) will be able to get the drug in one of three ways. They can grow up to six plants at home; join a club, where 45 members can cultivate as many as 99 plants; or buy it in pharmacies. All consumers are restricted to 40g (1.4 ounces) a month, enough to roll a joint or two a day. About 10% of adults smoke at least once a year.

More than 6,600 people have already registered to grow cannabis at home; 51 clubs have opened. But Uruguayan officials expect pharmacies to be the biggest retailers, and are counting on them to drive illegal dealers out of business. They will start out selling weed in 5g packets, with the concentration of THC, the active ingredient, capped at 15%. With a price of $1.30 a gram, store-bought marijuana will be cheaper than what is available on the street. The quality will be better, says Milton Romani, who oversaw the law's implementation until last July. Street cannabis can contain 52 toxins; pharmacies will sell purer weed. The government sought advice on potency from regular smokers. "They are the ones who know about this stuff," laughs Mr Romani.

Strait-laced pharmacists, used to selling remedies for aching joints, are nervous about supplying the makings of joints. "They would prefer not to stock a recreational drug," says Alejandro Antalich, vice-president of the Centre for Uruguayan Pharmacies, a trade association. "It's a conscientious objection." Some fear being dragged into competition with drug gangs. So far, just 30 of the country's 1,000 pharmacies have signed up. The interior ministry is installing alarms connected to police stations to reassure them.

Cannabis clubs have no such qualms. They can grow a wider variety of plants than pharmacies are allowed to sell, with no limits on THC. They see themselves as catering to aficionados. "It's the equivalent of comparing a bottle of wine with a box of wine," says Marco Algorta, a grower at the 420 Cannabis Club in Montevideo. "The clubs sell excellent wine." His worry is that 99 plants are not enough to supply members with their full entitlement. He wants permission to grow more.

Even then, clubs and home growers will cater to a niche market. The pharmacies' business will build slowly. The 30 outlets that have signed up cover much of the country. But their corporate suppliers are allowed to grow just four tons a year. That is 15% of what Uruguayans smoke. If the country is to drive pushers off the streets, pharmacies will have to sell a lot more weed alongside the dental floss. 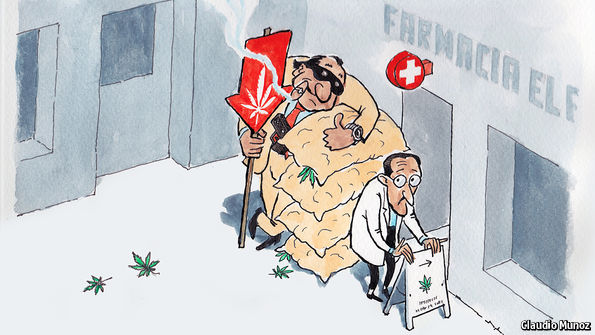