Uruguay could start selling marijuana in pharmacies in March, the head of the National Drugs Board said on Wednesday, although the government had initially been aiming for year-end.

The South American country is the world's first to permit the cultivation, distribution and use of marijuana, aiming to wrest control of the trade from drug gangs while at the same regulating and even taxing its consumption.

Uruguay election will go to runoff leaving scope of reform unclear. But a variety of hurdles are preventing the government from making its deadlines in implementing the measures passed into law last December. Even the plan to start selling marijuana in March, when President Jose Mujica leaves office, looks ambitious as the government is still tendering cultivation licenses.

"It will be at the end of this term, the start of the next," Julio Calzada, the secretary general of the National Drugs Board, told reporters on the sidelines of a conference.

Uruguayan voters head to the polls on Sunday to elect a new president to succeed Mujica in a runoff in which the ruling leftist Broad Front is on track to win a third consecutive term.

Mujica's marijuana legislation allows each household to register to grow up to six plants while users inscribed into an official list may buy up to 40 grams per person a month at pharmacies.

The number of people registered to be allowed to grow cannabis at home has jumped to 1,200 from 600 a month ago as fears have eased that the conservative opposition might win the vote and derail the legislation.

The reform is being followed closely across Latin America where the legalization or decriminalization of some narcotics is increasingly viewed as a better way to end the violence spawned by drug trafficking than the U.S.-led "war on drugs."

Uruguay is one of Latin America's most liberal societies and smoking marijuana has been legal since 1998. It estimates it has some 150,000 recreational smokers. 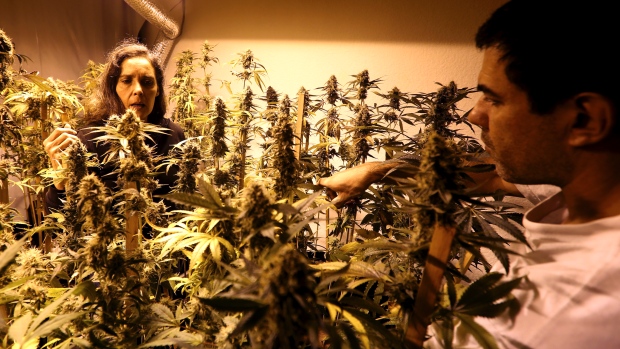