The president of Uruguay has been nominated for this year's Nobel Peace Prize. According to his advocates, JosÃ© "Pepe" Mujica's much talked-about marijuana legalization is in fact "a tool for peace and understanding." For the second year in a row, the Drugs Peace Institute, which has supported Mujica's marijuana legalization drive since 2012, insisting that the consumption of marijuana should be protected as a human right, has endorsed his candidacy, along with members of Mujica's leftwing political party the Frente Amplio, the PlantaTuPlanta (Collective of Uruguayan growers) and the Latin American Coalition of Cannabis Activists (CLAC).

Despite an avalanche of global criticism, in late December Uruguay became the first country in the world to fully legalize the production and sale of the popular herbal drug. Under the new law, which comes into full effect in early April, Uruguayans will have several options to gain access to it. The Drugs Peace Institute said that Mujica's stand against the UN-led prohibition of mind-altering substances is a "symbol of a hand outstretched, of a new era in a divided world." "It is a promise to bridge the gap between defiant marijuana consumers and the prohibiting society. Hopefully, the start of the acceptance of this consumption by society and the concomitant development of understanding of its use as a natural medicine, historically used for spiritual liberation, might initiate a process of healing in a world, very confused and deeply divided, over its religious legacy," the Dutch NGO stated on its website.

The institute pointed out that, unlike coca-based products that reinforce the ego and individual self-esteem, marijuana has the "peculiar quality of diminishing the consumer's ego." It pointed out that so far only one government leader has succeeded in challenging the prohibition: "the World's Poorest President" - Mujica - dubbed so due to his modest lifestyle.

"Jose Mujica once said that he's been looking for god but [hasn't] found him yet. By legalizing marijuana and opening the doors of spiritual happiness to the young, he might not have found the god of other nations..., but he certainly has followed in the footsteps of Jesus when he said 'Let the children come to me. Don't stop them! For the Kingdom of Heaven belongs to those who are like these,'" the NGO noted.

"I'm very thankful to these people for honoring me," Uruguay's president responded in Havana, as quoted by La NaciÃ³n Argentine daily. "We are only proposing the right to try another path because the path of repression doesn't work. We don't know if we'll succeed. We ask for support, scientific spirit and to understand that no addiction is a good thing. But our efforts go beyond marijuana - we're taking aim at the drug traffic," Uruguay's 78-year-old guerrilla-turned president said.

The leader of the South American state has championed the controversial legislation as a way to snuff out the illegal drugs trade in Uruguay, noting that both Washington and Colorado had legalized marijuana. He signed the bill into law on December 25. The Uruguayan government has until April 9 to finalize the regulations that will govern the sale and cultivation of marijuana.

Marijuana aficionados will be given carte blanche to grow cannabis. However, the law forbids having more than six hives per person. There will be a cap on the amount that can be bought every month, initially set at 40 grams. Residents aged over 18 will have to register in a special nationwide database that keeps track of how much marijuana was purchased in the past month. The law will forbid foreigners to buy it, and in an attempt to undercut the illegal market price of $1.40, the market price for the drug will be set at a dollar a gram.

Late last month, Uruguay's National Cannabis Federation launched special training courses on the cultivation of the popular plant. The training courses are also put forward as one of the measures taken by the authorities to control the trafficking and consumption of marijuana.

The international community lashed out at Uruguay's leader, with the UN's International Narcotics Control Board chief, Raymond Yans, saying that Uruguay "knowingly decided to break the universally agreed and internationally endorsed treaty." Mr Yans argued in a statement that claims that the law would help reduce crime were based on "rather precarious and unsubstantiated assumptions." Uruguay's president made it into the top 10 finalists for the award last year. However, the 2013 Nobel Peace Prize was awarded to the Organization for the Prohibition of Chemical Weapons.

Mujica has been president of Uruguay since 2010. He was a member of an armed political group inspired by the Cuban revolution, the Tupamaros, in the 1960s and '70s. After the military coup in 1973, during the dictatorship, he spent 14 years in prison. This included being confined to the bottom of a well for more than two years.

When democracy was restored in 1985, Mujica was freed under an amnesty law. He was Minister of Livestock, Agriculture, and Fisheries from 2005 to 2008 and a senator afterwards. When he became president, he pledged to give away 90 percent of his monthly salary to charities that benefit poor people and small entrepreneurs. Much to everybody's surprise, the unpretentious leader has also shunned the grandeur of the presidential residence in favor of his humble farmhouse. 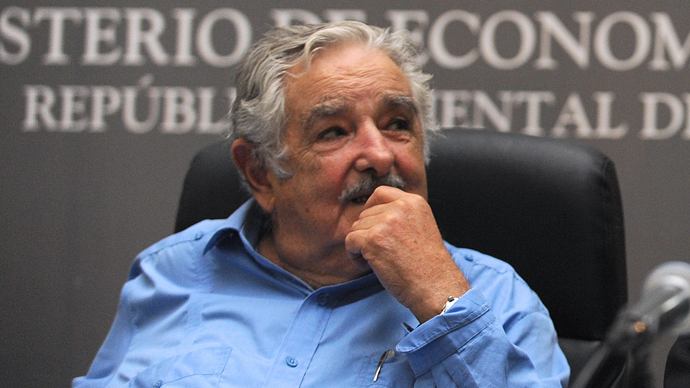 My type of President ! And seems honest...great read !

Now that is human resolve! what a great idea! bet ya it spreads.
we may not have it all together, but together we have it all
B

now thats my kind of prez!! just the kind of humble clear thinking moral leadership the founding fathers had in mind for the US!! please universe let this mans ideas spread and take root,grow and thrive! :58:

im a roode,croode,loode kinda doode! thats how my roundness rolls! ~ me

A breath of air in a suffocated world.
I had to read this twice, there is hope for this world !

Go Jose He gets my vote .
R

I think Pepe has actually found God, or at the least, he's hearing some of His words and doing good works to help His children.


"She is a tree of life to those who embrace her, and those who hold on to her are happy."

"... and every month it gives its fruits and its leaves for the healing of the peoples."