Utah issued its first hemp extract permits Tuesday, a step celebrated by families who shared stories of their children with epilepsy to overcome lawmakers' suspicions about medical marijuana. But families may continue to wait, since the Colorado nonprofit where many plan to acquire cannabis oil has a waiting list and a crop that won't be harvested until September. Annette Maughan received the second of two permits issued, allowing her to legally import cannabis oil for her 11-year-old son, Glenn. He began having seizures at age 3, and Maughan is hoping the oil will decrease their severity.

"This is the single biggest day in his life," said Maughan, a mother of four from Saratoga Springs. "My hope is that he'll just play hide and seek with his [siblings], get back to enjoying what he was like when he was three." To qualify for a permit from the Utah Department of Health, a patient must have intractable epilepsy. Applying requires a neurologist's certification and a physician's evaluation, and the fee is $400. The law allows permit holders to possess oil that is at least 15 percent cannabidiol, the chemical in cannabis believed to have anti-seizure properties. It must contain less than 0.3 percent of tetrahydrocannabinol, or THC, the chemical that gives marijuana users a high.

Jennifer May of Pleasant Grove, whose son Stockton has a severe form of epilepsy called Dravet syndrome, said parents are scrambling to get the required signatures. She expected few permits would be issued Tuesday because "getting a neurologist's signature in a day is an adventure." Cost may be another barrier. Hope 4 Children With Epilepsy, an advocacy group founded by May and Maughan, plans to start fundraising for those who need help paying the fee. Janice Houston, state registrar for the health department, said once an application and documents are complete, it takes about 15 minutes to issue a permit. 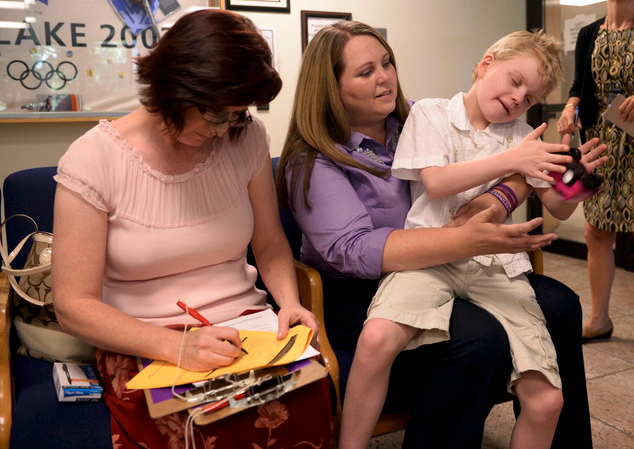