Tucked behind acres of corn, you wouldn't believe what your eyes see in a small inlet of farmland. It looks like something that shouldn't be there. It smells like, well, like a sweet version of pot.

But, it's not marijuana.

Hemp is being grown locally by two farmers, Glenn Rodes and Brian Walden, in Port Republic at Riverhill Farms. Between the two of them, they grow about 10 acres of hemp – five at Riverhill and five at Walden's farm outside of Charlottesville. The two farmers are growing hemp through a research program with James Madison University.

Over the last year, JMU has worked with Rodes and Walden, along with two other Virginia hemp farmers, to grow fiber, oil and dual cultivars with the hemp crop.

In Virginia, a farmer can only grow hemp for research purposes in partnership with a certified university. JMU is one of four universities in the state that allow for hemp research. Virginia Tech, Virginia State and the University of Virginia are the others.

Under the Controlled Substance Act, hemp is considered a Schedule 1 drug. To allow the legal growing and selling of it means it needs to be removed from that list.

Industrial hemp is one step closer to becoming a legal crop in the country, thanks to legislation that has made it into two House committees. The bill HR-3530 was introduced by U.S. Rep. James Comer (R-1) from Kentucky.

"It really needs to be separated out," U.S. Rep. Bob Goodlatte (R-6th) said of hemp. "I'm totally committed to it. It has great potential here in the Shenandoah Valley."

The bill has never made it to committees before. It's been introduced numerous times, but has always fallen flat.

"This is the first time we've gotten a consensus from law enforcement, judiciary committees," said Jason Amatucci, founder of the Virginia Industrial Hemp Coalition. "We've got to give Bob Goodlatte a lot of credit. Having him on board has got us a lot of momentum and allowed us to get it to the committees."

Now, the bill has made its way to the Subcommittee on Health and Subcommittee on Crime, Terrorism, Homeland Security, and Investigations, both subcommittees of the Energy and Commerce and Judiciary committees, respectively.

"We're very optimistic," Amatucci said. "Having (Goodlatte) on board has given it a lot of momentum. If he's optimistic, we're optimistic."

Amatucci doesn't have any doubts that the bill will make it through the committees and then be passed in the House. As for the Senate, he says there isn't much concern there because Senate Majority Leader Mitch McConnell is a huge supporter of the bill.

"He's our main guy, as is Rand Paul, I think we'll be OK," he said. "Legislation-wise I think we're rolling right along."

Once legalized, banking and insurance will come on board and the heavy restrictions on hemp would be removed, Amatucci said. It would be treated like any other crop, like soybeans, corn or canola.

Here's the breakdown, according to the National Conference of State Legislators:

-In 2014, the Agricultural Act of 2014, also known as the Farm Bill, was passed. It included a section known as "Legitimacy of Industrial Hemp Research," which defines industrial hemp or Cannabis plants containing 0.3 percent or less THC by weight and authorizes institutions of higher education or state department's of agriculture in states that legalized hemp cultivation to conduct research and pilot programs.

-In 2015, a bipartisan group of U.S. senators introduced the Industrial Hemp Farming Act, which would allow farmers to produce and cultivate industrial hemp. The bill would remove hemp from the controlled substances list as long as it contained no more than 0.3 percent THC.

◦establish commercial industrial hemp programs. Some states establishing these programs require a change in federal laws or a waiver from the DEA prior to implementation – like Virginia, for example.

In 2015, Virginia passed a law on the state level allowing for industrial hemp research, mirroring much of what the Farm Bill does. It also allows for commercial hemp growers, but not until hemp is removed from the controlled substances list and wouldn't require the farmer to register their crop with the federal government.

"The bill has been introduced and it's very bipartisan," Goodlatte said. "The judiciary committee has a role in it because of the law enforcement issues."

The principal committee for the bill is the Energy and Commerce Committee, which is chaired by an Oregon Rep. Greg Walden (R-2nd).

"He's interested in the subject," Goodlatte said of Rep. Walden. "Because he's from Oregon and Oregon has legalized marijuana, some of the issues that he faces are different than the issues we face here in Virginia."

Goodlatte said in regards to the hemp bill, Congress is trying to take the whole marijuana factor out of even consideration.

"I've encouraged him to keep that separate so it doesn't get bogged down ... and get commercialized as rapidly as possible," he said. "We're going to deal with research with the marijuana plant for other types of medical purposes like that. I'm not in favor of legalizing marijuana, I think it's a dangerous drug."

Goodlatte suggested to his constituents talk to broad-based agriculture groups and to encourage Oregon residents to talk reach out to Rep. Walden, because ultimately it's the decision of his committee.

"It has the potential to help the immediate locality and the state as a whole," said Sam Prins, professor at JMU.

It's also easy to grow in Virginia and according to history from Rodes, it has. Port Republic was a port town and listed hemp as one of its exports, he said. Hemp farming in the area likely started as early as the 1600s and stopped in the 1930s. Where they are growing hemp now could very well have had hemp being grown during the 1600s.

It should be planted before June and a farmer should expect a really fast growing season – at most 60 days. It's a filler crop, so it can be fit in with any summer crop rotation. 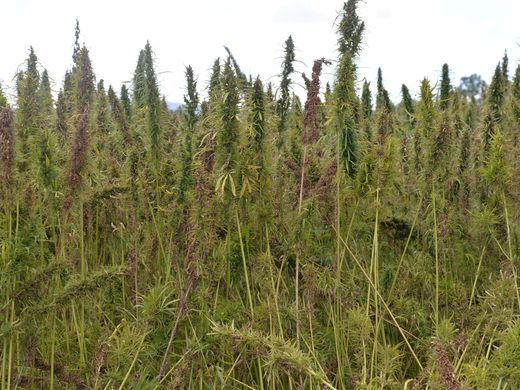