One of the state’s most powerful lawmakers is planning to file legislation in the upcoming General Assembly session to “take steps toward decriminalizing” the possession of small amounts of marijuana.

Senate Majority Leader Thomas K. Norment Jr., R-James City, said at a Virginia Crime Commission meeting Monday that he would be willing to move in that direction.

“The concern is that people are receiving a conviction for personal use (of marijuana) and having something permanent and criminal on their records,” said Jeff Ryer, a spokesman for Norment. “It affects employment prospects” and other aspects of life for years to come.

“The specifics of the bill have yet to be determined,” Ryer said, and its language would be “heavily reviewed” by Virginia Crime Commission staff and others before Norment puts it in the hopper.

“There is no way that this legislation will be able to be viewed as legalization,” Ryer said. If the bill should pass, he said, “We aren’t becoming like Colorado. … Nothing close to that is happening.”

Decriminalization doesn’t mean making marijuana legal. Instead, it would mean making pot possession for personal use a civil offense rather than a crime. The possibility of jail time would be removed, with the violation instead becoming akin to a speeding ticket with a fine.

Last November, Norment asked the Virginia Crime Commission to look at the policy considerations of loosening the state’s marijuana laws, with the staff presenting its findings in Richmond on Monday.

Among other things, the study found a significant racial disparity in the 133,000 marijuana arrests across Virginia between 2007 and 2016.

That is, though 20 percent of Virginia’s residents are black, 46 percent of those arrested on their first possession pot charges are African-American. And there’s even more disparity with second and following offenses, the study found.

Advocates for pot’s legalization have long contended that such arrest disparities exist despite blacks and whites reporting using pot at equal rates.

"We have a lot of concerns about bringing this into the mainstream without fully exploring the unintended consequences that we’re are not prepared to deal with,” said Dana Schrad, executive director of the Virginia Association of Chiefs of Police. “The caution from law enforcement is doing this without considering the impact on public safety.”


“Decriminalization doesn’t mean making marijuana legal. Instead, it would mean making pot possession for personal use a civil offense rather than a crime."​
Ryer estimated that the chances of getting a decriminalization bill through the General Assembly this term stands at about 50-50, “a flip of the coin likelihood of success.”

“There have been stiff opponents in both chambers to the lessening of penalties to any existing (criminal) law in the commonwealth — and we should expect that with this issue as well,” Ryer said. “Any change on issues of crime and punishment faces high legislative hurdles in Virginia.”

Under current state law, a first-time marijuana possession conviction is an unclassified misdemeanor, punishable by a fine of up to $500 and up to 30 days in jail, with a defendant’s driver’s license also being revoked for six months.

The study found, however, that very few inmates are in Virginia jails solely on marijuana possession charges. In fact, the study said, only 127 inmates are jailed across the state on pot charges alone. For a second offense, the median jail term was 15 days.

“There’s a misnomer out there that the jails are clogged with people who have been caught smoking a joint,” Ryer said. “That’s not true at all.”

The commission raised other issues that lawmakers would have to sort out as part of any move to decriminalization.

Among them: What should the fine be for a civil marijuana possession offense? What would happen to the provision that those convicted of marijuana possession lose their driver’s licenses for six months? What weight threshold will turn a civil possession charge into a criminal one? (States range widely on this — from 10 grams in Maryland to 100 grams in Ohio).

Lawmakers and the courts will have to decide whether police would still be able to search a vehicle based on the odor of marijuana. Should pot possession remain a crime in cars and schools? Could a civil violation still be cause to revoke someone’s probation on other charges?

It’s also up in the air whether doing away with the driver’s license suspension could cause Virginia to lose federal highway money. The study said that doing so cause the state to give up 8 percent of its federal transportation dollars — or $85 million out of $1.06 billion.

Schrad, of the police chiefs association, said decriminalizing marijuana while it’s still a federal crime “is a dangerous path for a state to go down.”

She said that today’s cannabis contains far higher levels of THC, pot’s active ingredient, than the drug did 25 years ago, even while marijuana is unregulated by the Food and Drug Administration. "We have regulations for what goes into a cigarette, for goodness sake,” she said.

She also said better measures are needed to ensure that people can’t get behind the wheel after getting high. There’s no good test — such as a Breathalyzer for alcohol — that makes it easy for police to decipher how impaired someone is.

“If you’re going to get in the car or handle a weapon, we need to address that in law to make sure we are looking out for public safety,” Schrad said.

York-Poquoson Sheriff J.D. “Danny” Diggs said he’s also against decriminalization. “The jury is still out,” he said, on how other states have been affected by a move toward legalization.

“It’s too early to tell what kind of impact it really has had,” he said. “I need to know more information before I change my mind. Let’s see what really happens in Colorado before saying it’s OK to do it in Virginia.”

Diggs pointed out that first time pot arrestees can enter a program, “and within a year it’s wiped from your record.” “People say it puts such a strain on the court system, and I think it’s false,” he said. “It’s no more of a strain on law enforcement and the courts than traffic violations.”

The overwhelming majority of people who submitted comments on the issue in recent months — 97 percent of the 3,850 who commented — favored decriminalization, the commission said.

Speaking to the commission Monday, Jenn Michelle Pedini, the executive director of Virginia NORML, which advocates for marijuana legalization, said that pot arrests grew 76 percent in Virginia between 2003 and 2014 — and 106 percent for African-Americans — even as they fell 6.5 percent nationally.

“Virginia has remained one of the most punitive states in the nation for marijuana use,” Pedini said. 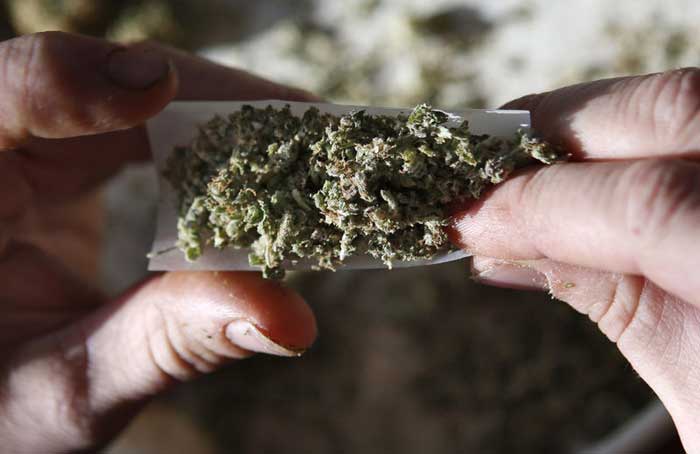