Virginia Senate Leader - It's Time To Look At Marijuana Decriminalization

In a switch, one of Virginia's most powerful elected officials said Tuesday that he supports studying the decriminalization of marijuana.

"I think it's absolutely crazy that we continue to lock people up for possession of a modest amount of marijuana," said Tommy Norment, the majority leader of the state Senate, who voted against a decriminalization bill last year.

Speaking before a Norfolk City Council dinner at the Slover Library, Norment said the issue should be studied by the Virginia State Crime Commission, which makes recommendations to the legislature.

But Norment, a Republican from James City County, said getting such a "cultural change" past some of his colleagues in the General Assembly would be a challenge.

Decriminalization would be a less radical shift than legalization. Under decriminalization, possession of marijuana would remain illegal but would be treated something like a traffic offense. People could be given a ticket and a fine, rather than an arrest and a criminal record.

Norment said that would keep people from having the "stigma" of a criminal record.

His remarks came as the Norfolk City Council met to hear presentations on their proposed agenda for the 2017 state legislative session.

Norment said there's no chance of a marijuana decriminalization bill passing the General Assembly in 2017, especially because it's an election year for statewide offices.

But he said he will urge the Crime Commission, of which he is a member, to study the issue next year. That could lead to legislation in 2018.

Norfolk's marijuana debate started when Councilman Paul Riddick said during a meeting in August that he wanted the city to push for decriminalization.

All seven other members of the Norfolk council have since said they support the change.

The Crime Commission has staffers who conduct its studies. Norment said a nonpartisan, professional look at the facts could help convince skeptical lawmakers of the merits of relaxing marijuana laws.

The Crime Commission must study an issue if the full General Assembly passes a resolution ordering it to do so. It gets other study requests from legislative committees, state agencies and outside groups but doesn't have the resources to take them all on.

Even getting a Crime Commission study in 2017 is not a sure thing. Its chairman is Del. Rob Bell, a Republican who is running for attorney general and who in the past has opposed changes to marijuana laws.

"If you've got the Senate majority leader saying that he supports it, then why not take a shot at it?" Smigiel said.

Norment was invited to speak Tuesday by Norfolk Mayor Kenny Alexander, a member of the Senate until his election as mayor this year.

Norment's remarks reflect the rapid change in public perception of marijuana in recent years. Just last year, he voted against a decriminalization bill and quipped that Virginia wasn't yet ready for a "Rocky Mountain High." (The line was a reference to the John Denver song and to Colorado's legalization of marijuana.)

Norment said his vote on a future bill would depend on the specifics.

Asked about his change of heart, he said it was a reflection of being educated and of broader cultural changes.

"When I speak to millennials, they see things very differently than I do," the 70-year-old lawmaker said in an interview.

A lawyer, Norment said he represents people on drug charges and has come to doubt the idea that marijuana is a gateway drug.

Earlier, he told the crowd that, even though he disagrees with President Barack Obama on many policies, the president deserves praise for commuting the sentences of nonviolent drug offenders.

"We are tough on crime," Norment said. "It's a question of what crimes we want to be tough on." 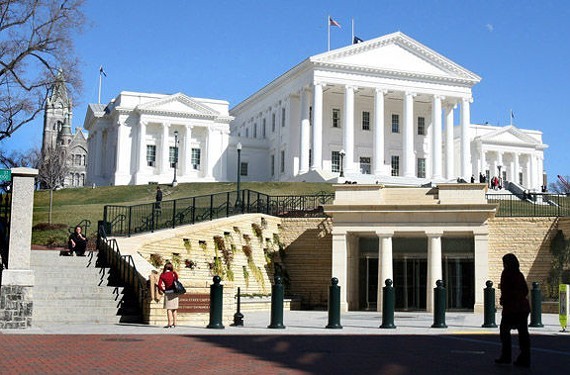