Waging War Against War on Drugs

Profound thanks are due televangelist Pat Robertson for stating so clearly what many of us have been screaming in the wilderness for years -- that the criminalization of marijuana is a plague on young people. May he lend courage to politicians who know better but won't do the right thing for fear of seeming soft on drugs.

"We're locking up people who take a couple of puffs of marijuana, and the next thing they know, they've got 10 years," Robertson said on his Christian Broadcasting Network show, The 700 Club. These are mandatory sentences, he adds, that absurd laws force on judges. Robertson does not call for legalization of all drugs, as do many disillusioned law enforcers, judges and prominent economists of all political stripes. He does say that criminalizing the possession of small amounts of pot is "costing us a fortune, and it's ruining young people."

Where are the foes of big government in this? They should note that the federal Drug Enforcement Administration's budget has more than quadrupled over the decade to $2.6 billion -- without making a dent in the quantity of illegal drugs sold in this country. ( The narcotics, meanwhile, are more potent than ever. )

But the DEA bureaucrats know how to expand a mandate. The agency now operates 86 offices in 63 countries and runs a shadow State Department that at times mucks up American diplomacy. It employs nearly 11,000 people.

And the DEA is but one expense in the drug war. Add in the costs of local law enforcement to round up suspects, courts to prosecute them and jails to hold them, and the war on drugs weighs in at about $50 billion a year. States and municipalities bear most of the costs.

Of course, these numbers don't take into account the lost tax revenue that legalizing these drugs could generate. Harvard economist Jeffrey Miron estimates that taxing marijuana like tobacco and alcohol could add $6.4 billion a year to state and local treasuries.

If drugs were legalized, narco-terrorists ( including the Taliban ) would lose their chief source of funds, drug gangs would go out of business, and the drug-fueled bloodbath now tormenting Mexico would end. Border security would vastly tighten as drug traffic dried up.

Ending the war on drugs has support across the political spectrum. Many on the left regard America's drug laws as an assault on personal freedom and racist in their application. Prominent voices on the right - -- for example, William F. Buckley and Milton Friedman -- long ago declared the war on drugs simply a dismal failure.

This month, Britain's former drug czar and defense secretary, Bob Ainsworth, declared that the war on drugs is "nothing short of a disaster" and called for government regulation of drug manufacturing and sales. "We must take the trade away from organized criminals and hand it to the control of doctors and pharmacists," he said.

No one here is advocating drug use. I have never touched hard drugs, but the "war" against them lost its romance the day that a drug addict pointed a knife at my gut, demanding money for a fix that should have cost him no more than a head of celery.

Then there's the rank hypocrisy. President Obama admits to having "tried" cocaine, and President George W. Bush all but did, refusing to answer questions about his previous drug use. Yet we still ruin the lives of teenagers caught using or dealing in far less dangerous marijuana.

The injustice of this is what aroused Pat Robertson. A social conservative has now filled a gap in the anti-drug-war lineup of liberals, economic conservatives and libertarians. And we welcome him. 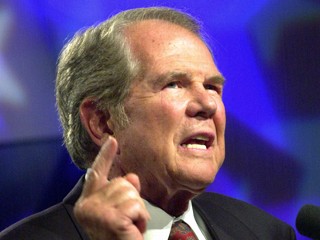 I have never been a Pat Robertson fan, or any televangelist for that matter, but I am glad he is taking a stand on this. He has the influence to swing many voters in favor of medical or recreational marijuana, as he has a lot of followers. My hat is off to Mr. Robertson! Thank you for standing up!

Thank you Pat Robertson for speaking out! Wake up America!

Drug Warriors Against The War

Is the War on Drugs Over?