For Seattle’s non-patients, the most noticeable change might be an urban landscape suddenly devoid of signs bearing green crosses.

Shutting down medical shops will also mean putting some people out of a job including workers and owners at a handful of Central District dispensaries.

Shy Sadis, who claims ownership of 10 dispensaries including Starbuds at 23rd and John, said nearly all of his 80 employees could be out of work if the state doesn’t establish a pathway for medical shops to re-open as retailers.

“I wish medical could stay, but if it’s going, I’m going to have to make the transition to full I-502,” he said. “I’m hoping they will give us I-502 licenses for shutting us down.”

Many of the city’s medical marijuana dispensaries are expected to close by July 2016 under the reformation act, though the overhaul does pave pathway for some to transition into recreational shops. I-502 shops already in operation will be able to obtain medical endorsements to sell medical marijuana to card-holding patients tax-free.

For patients, the new regulations mean collective gardens will basically be gone by next year and but limited home grows are allowed. Under the old system, large grows that operated on the fringes of the law were occasionally shut down by police.

Now, growers that have remained in good standing with the state will be given priority to keep their gardens as 60-plant, four-patient cooperatives and patients will be able to grow up to four plants at home.

Patients who sign up for a newly created voluntary registry will be allowed to grow an additional two plants at home and posses three times the amount of marijuana allowed under I-502.

Owners at a handful of other medical dispensaries around Capitol Hill did not return CHS requests for comment on how they’ll be planning for what could be, their last year in business.

I-502 shop owners say the largely unregulated medical shops as unfair competition to their highly regulated businesses. Uncle Ike’s owner and CHS advertiser Ian Eisenberg said he supported Inslee’s recent changes to the law, but is waiting to see how a separate bill dealing with taxes shakes out.

Under HB 2136, the current three-level tax system on I-502 growers, producers, and retailers would be collapsed to one point-of-sale tax. It would also stop retailers from essentially getting “double taxed” by switching from an excise tax to a sales tax, in theory bringing down the price for consumers.

“It needs to be a level playing field and patients need to have access to medicine they trust,” Eisenberg said.

Details on the training and referral process recreational shops will need to follow will eventually be set by the state liquor board, changed to the Washington state Liquor and Cannabis Board under the new law. Eisenberg said he would wait until those rules were ironed out before deciding whether or not to make medical marijuana part of his business.

As Washington state refines its legal marijuana policies, the drug/medicine still remains very much illegal at the federal level. On Saturday, May 9th, marijuana activists will again gather at 11 AM at Volunteer Park for the Seattle Cannabis Freedom March to call for an end to federal prohibition. In 2014, the fight for medical access was the focal point of the event. 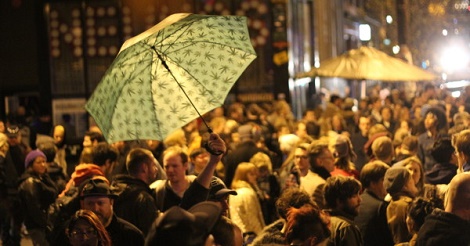