The state's top legal official is formally urging the U.S. Supreme Court to reject a lawsuit by Nebraska and Oklahoma that challenges Colorado's marijuana laws, saying it could threaten Washington state's own fledgling system for regulating pot.

State Attorney General Bob Ferguson made his arguments in a "friend of the court" brief filed on Friday.

Nebraska and Oklahoma filed a lawsuit with the high court in December, claiming that Colorado's Amendment 64 legalizing marijuana under state law is preempted by federal drug laws. They ask the court to hear the case under its "original jurisdiction" over lawsuits between states.

"I am disappointed that Nebraska and Oklahoma took this step to interfere with Colorado's popularly enacted initiative to legalize marijuana," Ferguson said. "I filed this brief to protect Washington's interests and the will of Washington's voters from interference by other states.

"If the Supreme Court takes the unfortunate step of agreeing to hear this case, it will threaten every state's ability to make its own decisions about how best to regulate marijuana, whether for medical or recreational purposes," he added.

The lawsuit by Oklahoma and Nebraska officials claims that marijuana purchased in Colorado is being brought into neighboring states where it remains illegal.

"This contraband has been heavily trafficked into our state," Nebraska Attorney General Jon Bruning said. "While Colorado reaps millions from the sale of pot, Nebraska taxpayers have to bear the cost."

Some law enforcement agencies in western Nebraska, along the Colorado border, have complained that marijuana from the neighboring state has drained their resources.

But the brief filed by Washington state argues that the Supreme Court should not take up the lawsuit based on its own longstanding policies regarding disputes between states.

Ferguson argues that the lawsuit does not involve Oklahoma's or Nebraska's "sovereign interests," but is a simple policy dispute over how best to regulate marijuana and therefore not an issue for the Supreme Court.

Ferguson also argues that the lawsuit should be heard first in a lower court.

"That venue would allow the states to resolve their dispute without immediately impacting other jurisdictions around the country the way a U.S. Supreme Court decision could," Ferguson said in a prepared statement. 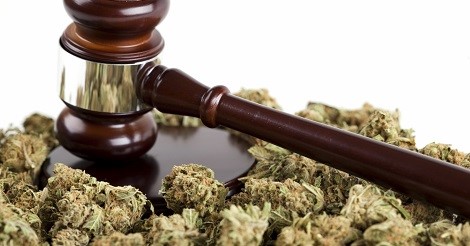