Ramsey Hamide grinned as he leaned back in his chair, looking out at piles of palm-sized plastic bags stacked in containers in the back room at Main Street Marijuana. For the first time since the store he manages opened three months ago, Hamide found himself in an entirely unfamiliar situation. With two safes bulging and a table packed with product awaiting sale, Hamide couldn't accept any more product. In fact, on that Wednesday afternoon last week, he found himself turning some growers down.

"We're pretty much at capacity on what we can store here," Hamide said. "We're full. I can't take anything more until we sell this." Both he and his brother, fellow manager Adam Hamide, looked visibly relaxed and happy – relieved after what's been a bumpy shortage-filled launch to Initiative 502, which legalized marijuana in the state.

Adam Hamide said he was even willing to make a bold prediction. "We'll never run out of product again," Adam Hamide said. When given a dubious look from a reporter, both brothers nodded – it's happening, they said. "This time, it's different," Ramsey Hamide said. For the past three months, both Main Street Marijuana and New Vansterdam, Vancouver's two recreational stores, have struggled to keep their doors open. Not because of lack of demand, but because they simply couldn't get enough product to stay open.

But with new growers entering the market, outdoor growers reaping their first major harvests and a handful of new exclusive business partnerships, representatives from both stores say the worst days are finally over. "Will we never close again? I'm not sure I'm ready to say that, but I think we're close," said Brian Budz, one of the owners of New Vansterdam. "We are certainly on the road to being well stocked for the foreseeable future."

Some marijuana prices over the weekend in Vancouver dropped to less than $20 a gram from a high of $35 to $38 a gram just a week ago. (A gram is enough to make about two tobacco-cigarette-sized marijuana joints.) There's still a range of prices, depending on what growers charge, but as a whole, the worst seems to be over, Budz said.

"The prices have been so high for so long," Budz said. "But we met a few growers that have allowed us to bring them down." And dealing with a wider array of growers is great for business, Ramsey Hamide said. "We wanted to have our doors open and have product consistently," Ramsey Hamide said. "Now, it's a matter of selectively procuring product based on price, quality, strains."

And those growers that gouged when they had a captive audience will be remembered, he added. "I think they're starting to realize that those days are going away," Ramsey Hamide said. "It used to be, we were spending money wining and dining them. Now, they're taking us to dinner." Some of the new growers are looking like much better business partners, too – both for stores and for consumers.

One new grower, Emerald Twist, successfully lobbied for their product's retail prices to drop from $20 to $15 per joint at Main Street Marijuana. " The salesman told me if we had a hard time making that price work, he'd drop his wholesale price to us, because it's all about the consumer," Hamide said. "That's so great to hear." Jerry Lapora, Emerald Twist's sales and marketing director, said his company's goal is to price product for the long term, not for a quick payday.

"We just want to come out of the gate right away with a fair price," Lapora said. "We want our consumers to know we've got a fair product for a fair price. And we want to work with stores to keep those prices lower." The company plans to monitor stores to make sure they use a 300 percent markup, Lapora said. That markup covers store operational costs, employee pay and other things, and still leaves some room for a profit, he said.

Emerald Twist's suggested retail price for its most recent batch of joints is $15 a gram, and for buds (loose plant material used in pipes) it's $22 a gram at stores. "That's the absolute max," Lapora said. Both Vancouver stores are stocking Emerald Twist product. The two stores have also secured a handful of new deals with other growers, including Urban Farms in Longview, that should also secure lower prices to consumers.

That's one of Urban Farms' goals, said Greg Griffiths, one of the owners. "We thought it was important to work with retailers locally and also to keep prices down," Griffiths said. "I think the pricing issues have been scary. I think we lost a lot of customers that went back to their underground dealers."

Griffiths said he thinks retail prices should be slightly higher than black market and medical marijuana prices, taking into account that the testing and taxes make it difficult to make recreational prices parallel those markets. Equal would be ideal, but that may be hard in the coming months.

Ramsey Hamide said his goal was to get prices to the range of $15 to $25 a gram, which got a nod from Griffiths at a recent visit to the farm. And both Budz and Ramsey Hamide said they're very glad to see things finally get better for consumers. "We want to thank our customers so much for being so patient," Budz said. "We really appreciate them. This is just the beginning." 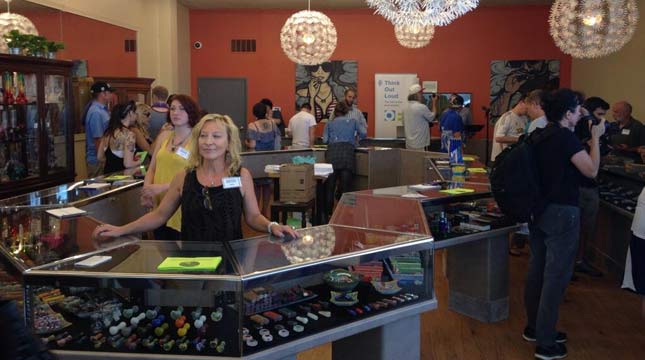 T
Not Enough Weed To Go Around In Washington Pot Industry