Washington State - Pot Prices Could Come Down As Harvest Ramps Up

Slowly and in beat with the rhythms of agriculture, licensed producers are growing enough pot that retailers hope to eventually lower prices enough to diminish the black market, one of the major justifications for Initiative 502, passed by state voters nearly two years ago. "We'll slow it down, yeah," said Mary Van de Graaf, owner of Mill Creek Suite A, one of two licensed retailers in Union Gap.

So far, even store owners like Van de Graaf admit legalizing and licensing marijuana has done little to combat street sales, where unscrupulous dealers don't test their products, pay taxes or check the age of their customers. Statistics for 2014 are not out yet, but there's an increase this year in illegal grows on tribal lands, public lands and in backyards, said Jodie Underwood, a spokeswoman the federal Drug Enforcement Administration's regional office in Seattle. Just Monday, authorities seized 20 pounds of processed marijuana and 43 plants in Zillah. The same day, police arrested two men they accuse of stealing medical marijuana from a home in Selah.

"I have customers come in and say they would like to buy from me, but it's just so much cheaper on the black market," Van de Graaf said. Her clients so far have been limited to older, more affluent visitors. Many would-be buyers enter their stores, sniff a few buds and say they like the idea of buying legally but flat out admit they intend to stick with their illegal sources until prices come down. Currently, Yakima Valley retailers pay wholesale producers from $8 to $15 per gram, about the same range as the street value of the untaxed, illicit version that runs anywhere from $10 to $20 per gram depending on quality. Medical marijuana, often sold illegally, runs between $10 to $12 per gram, retailers say. Store owners then charge between $25 to $40 to cover their operating expenses and taxes. The state charges a 25 percent excise tax on all retail sales, while the federal government, which still considers marijuana against the law, charges store owners income tax but allows no deductions.

The math often works out to a net gain of less than 5 percent from which retailers must pay rent, utilities, wages and their monthly bills for their startup loans. However, things have improved and will keep improving, some retailers promise. At least stores can keep their doors open now. Van de Graaf opened her shop July 23, a couple weeks after the state's first wave of stores opened, only to close seven days later because she couldn't keep enough product on her shelves.

She reopened again Aug. 9: "We've been steady since then." These days, she estimates she spends about 30 minutes on the phone each day talking to suppliers instead of hours. Up until this fall, most of the state's marijuana has come from more indoor growers, who have much higher electric bills than Eastern Washington's sunlight farmers. Van de Graaf and her two Yakima Valley competitors predict the extra supply from the sun-grown harvests will allow them to cut their prices in half sometime this fall.

"That's when we foresee the price coming down is when the outdoor stuff starts harvesting," said Tim Thompson, owner of Altitude in Prosser. Then, they might finally start luring customers away from the black market, they said. "I think at $15 (per gram) we would," Thompson said. Adam Markus, owner of Station 420 in Union Gap, also predicts prices will drop by half but doesn't suspect they will stay that way for long.

Just this week, Markus drove twice to Spokane and once to Seattle to meet with growers in search of enough product to keep his shelves full. Last week, he spent a day and a half with no marijuana in small packages, in spite of an entire day of desperate phone calls. "There wasn't any available," he said. Markus suspects prices will drop only for a few months but go back up again once retailers sell out of their outdoor-grown supplies. Changes to federal tax laws in his favor aren't coming anytime soon either, he said.

"Who's got a crystal ball? Who knows?" he said. "I hope I'm wrong." As of Tuesday, the state had issued licenses to 235 marijuana producers, though not all have necessarily started growing. Klickitat County had 12, Kittitas County five, Benton County six and Grant County two. Yakima County had one, Orgrow in Moxee.

Yakima County has banned all marijuana businesses in the unincorporated areas, while the city of Moxee allows only producers and processors, not retail stores. Most growers prefer locating outside city limits, where they have more space between themselves and neighbors and cheaper water. Growing pot is more technical than it looks, producers say, another trait it shares with most of the region's crops. Crews must watch out for pests and mold, manage canopy density and regulate water. Most of the Kittitas growers haul water in by truck because of the Department of Ecology's moratorium on new wells. "It's a challenge," said Cliff Hughes, owner of Hydro Light near Cle Elum. At least two of the Kittitas County growers, including Life Gardens, aren't completely outdoors.

#They plant in grow tubes with plastic tarps stretched over a pipe skeleton similar to those used by a handful of Yakima Valley vegetable farmers. The tubes let in fresh air and sunlight but allow the gardeners to regulate heat and humidity. In the future, they may be able to harvest three times in one year, instead of just once, or at least stagger their seasons to keep the supply more steady.

At Life Gardens, bamboo stakes support the weight of budding branches, much the way notched lumber once did for ripe apples. Mark Ziegler spots a stick with too much ripening foliage crammed against it, causing him to worry about mold. On another stake, wire chokes a ripening bud. "I'll have to find out whose row this is," he said. Ziegler, 37, moved to the Ellensburg area in late June from Santa Rosa, Calif., where he worked for many years tending medical cannabis crops.

Already, his crews may have learned some lessons. Their plants, some more than 7 feet tall, have grown so big and wide that workers have to crawl on their hands and knees to reach the ones in the back. They might spread things out a little next year. "A lot of people underestimate it and they learn the hard way," Ziegler said. 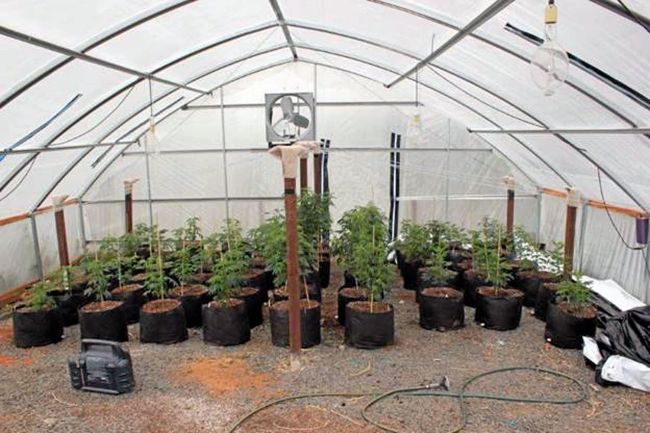 In Washington State, It's A Checkerboard Of Marijuana Rules And Regulations