The prohibition of marijuana in Washington state fell early Monday as a small number of retail shop owners received an electronic copy of a license to sell just-for-fun cannabis. Those 2 a.m. local time (5 a.m. ET) emails bang-started a scramble for the actual pot, now waiting in the warehouses of an equally small number of separately licensed growers. Exactly 24 hours after product orders are placed, per a mandatory waiting period, the owners will be allowed to open for business, launching a new experiment in the legal sale of a very old plant.

The cash registers are ready. The display cases are clean. But less than a day before the likely first retail sale of marijuana in Washington, no one knows for certain which stores will be open, or which growers will provide the chlorophyll of the hour. "It's going to come down to the wire," says Sean Green, the founder of Kouchlock Productions, which got the state's first official growing license back in March. Now there are about 80 licensed growers, and some 20 retail shops who expect a license this week.

Green said at least three retail shops will open Tuesday: Cannabis City Seattle, Top Shelf Cannabis in Bellingham and The Freedom Market" in Kelso. "Our industry is evolving," Green continued. "But it's evolving very slowly." Eighteen months ago, Washington's legalization effort passed with cartwheeling support. Voters saw a special chance to build the perfect pot machine from scratch, unlike Colorado, which had an existing medical marijuana regime. Now that perfect dream has yielded to a much more chaotic reality, some say.

"It's a mess," says Kurt Boehl, a lawyer who represents a number of hopeful marijuana retailers and growers. "People are still scrambling to get their paperwork in." No one doubts that someone, somewhere in the state will sell someone else a joint this week, but the market beyond that remains as foggy as the Puget Sound. The state faces a huge backlog for licenses. There are only 18 license reviewers sifting through thousands of applications. The first approvals for growers didn't go out until March, which left at most two growing cycles to stock the shelves.

That's created an inescapable shortage of product, and a growing population of desperate, irate business people. Some have already gone under as opening day was delayed again and again. Others are trying to sell or hold on long enough to break even. Ed Rhinehart is a middle-aged businessman who sunk tens of thousands of dollars into a marijuana farm. He expected to monetize his crop by April, as the state originally planned. Three months later, however, he's had to lay off four workers, and there's still no firm date for when he can start operations.

"If I had to do it all over again," he told The Associated Press this month, "I wouldn't have done it." The agency in charge is the Washington State Liquor Control Board, which has been drafting rules and reviewing license applications. The board has conceded the chaos of the recent past, attributing delays to an unexpectedly large number of license applicants (thousands instead of hundreds), many of them apparently dazed, confused, or otherwise befogged by pot's new bureaucracy. Turns out there's a lot of paperwork between the utopian optimism of legalization and the dreary reality of actual sales. "Some people just don't have an idea what they're doing – no clue at all," Randy Simmons, the board's pot project manager, told the AP this week. "It slows down the process."

But even if the process were working, not everyone would be ready to celebrate. At least 10 cities, counties, and municipalities have banned marijuana business out right. Dozens more have declared a moratorium on new businesses, beyond the state's hazily regulated medical marijuana shops. They want to wait, and see. Will pot use skyrocket? Will the drug fall into the hands of kids? Will overdoses swamp emergency rooms? Will high drivers cross the yellow line, pierce guard rails, and veer through who knows what? Probably not immediately, if Colorado is any indication. 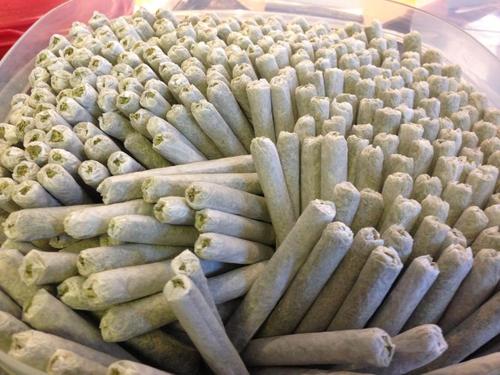