Laughter rippled through an audience of 200 Wayne State University law students and visitors Friday as a pharmacy professor showed how to soak marijuana in alcohol to make what he called a tincture -- like potions that doctors commonly used a century ago to ease pain.

"After three months, you open the bottle and put a couple drops under your tongue ... and you get almost an immediate effect," Jesse Vivian said to applause at the daylong conference on National and State Marijuana Reform.

The conference, held in Detroit at the WSU Law School, was organized by students on the Wayne Law Review.

After his talk, Vivian wouldn't say whether he used marijuana onstage.

Some speakers said they support legalization of marijuana, but symposium leaders said they weren't promoting that.

"This was more to raise awareness of the issue, regardless of whether you're pro or con," said Wayne Law Review editor-in-chief Michael Jameson, 25, of Royal Oak, a third-year law student.

Former Michigan Attorney General Mike Cox said Michigan's beer-and-wine distributors should distribute medical pot. If the drug were to be legalized for nonmedical use in Michigan, it needs tight regulation because "you can't just legalize it and then sing kumbaya," Cox added.

A campaign began this month to put a constitutional amendment on Michigan's November ballot that would legalize possession of small amounts of marijuana by those 21 and older.

Former Obama administration drug adviser Kevin Sabet said he opposed legalizing pot because of its addictive potential. But enforcement should be eased against "the person just raising this in their backyard for their own use," Sabet said.

Dozens of pro-legalization visitors sat with students at the event. They included Dondi Meitz of White Lake Township.

"I grew up in a wheelchair," and "I am living proof for the medical value of cannabis," Meitz said, as she stood outside the auditorium. 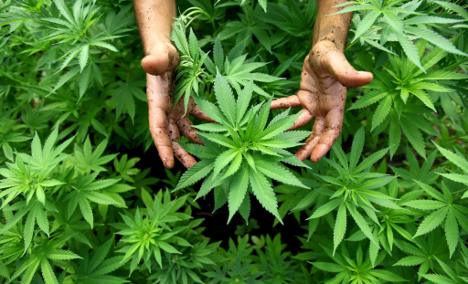