"We Used to Cultivate Hemp"

The Batwa pygmies of eastern Congo are traditionally forest dwellers, but due to deforestation and repeated attacks by Hutu militia, who came over the border from Rwanda a decade ago, they have been dispossessed of their land. Pygmy chief Jean Pierre Canetto, 60, says that his people are now fighting just to survive.

I was born in the forest at Chirondo, in the Kabare territory, in 1948. As pygmies, our lives have always been in the forest, but since we were chased from there things have not been the same.

We were being chased from the forest as long ago as 1968, when the government sold the park to a Belgian man. As soon as he bought the forest he said that all the pygmies had to leave. Then, when the war began in 1996, the Interhamwe came. They were chased out of the Kachusha refugee camps by the troops of Laurent Kabila and they came to Ihusi, where we were living, and took over our village.

In 1998 the Interhamwe took my sight. Normally, when they arrived in the village, they would kill, rape and loot. On this occasion they killed several of us. They didn’t kill me, though. Instead they used panga [machetes] on me; they stabbed them right into my eyes. My father put medicinal leaves on my eyes to heal them; I was in such terrible pain; but I became blind. To get around, I hold onto a stick pulled by someone else.

A year later they came again and this time we were forced to flee. We were dispersed into the banana plantations, where we have stayed from that day in 1999 until now.

We lost so much when we lost our forest. Traditions and the basics of life, food and medicine. We got all our medicines from the forest; now we have none. The guards won’t let us in to find them. If we try they shoot at us.

All of our clothes came from the forest, too. We wore the leaves of the lumba tree for clothing, but we can’t find those trees outside the forest. We can't use the wood for fires any more either.

It was always our tradition that if a man wanted to marry, he had to offer an antelope, but now can't hunt them. We used to sell our meat to other communities. We had our own markets in the forest and everyone would come and sell what they had. Some had money, others simply exchanged goods.

We ate much better back then. No one went hungry, no one starved. We had meat, cassava, manioc, yam, sweet potatoes, caterpillars and other insects, too. We could pick forest fruits from the trees. We harvested honey. These days our health doesn’t even begin to compare to how it was.

Did you know, if you eat porcupine you will never get ill. It was indispensable to us back in the forest, but we can no longer get it. First you take the quills out, then you cut its belly and remove the entrails. They are bitter, but they cure many things. When you eat beans and they sometimes make you a bit ill – if you add some porcupine entrails to them, your stomach will stay well.

We used to cultivate hemp, too. It cures many illnesses, helps back pain and sends away the witches. It was good commerce. Without it we can’t afford to send our children to school.

When a woman is about to have a baby, the other women in the village surround her and accompany her to the back of the house. They remain with her until the end. If the woman has problems during the delivery we use a plant called kifubula. We boil it and give it to the woman to drink, and the delivery progresses smoothly after that. If the baby is in the wrong position, or if there are any problems, this rights it. But now that we are far from our medicines, we have to go to a hospital. But we have no money. There is a hospital three hours' walk away that takes pity on us and will treat us for free. But it's a long way and not everyone makes it.

Music has always been important to us. When there is a wedding we play drums, the guitar and a kind of thumb piano called likembe. To crown a new chief we play drums and hunt an animal and eat it together. Then we drink banana wine. Everyone dances until the drink is finished.

We continue with some of our traditions. Bwami, our religion, for instance. We continue to practise it. And we continue our traditional initiation rites, which welcome a young man into life at nine years of age. This is held under our sacred tree, the mutudu. It grows in our forests, but we have planted it here, so we can continue.

We had everything we needed in the forest and I deplore the fact we have had to leave. Our customs are being diminished over time. But as much as we can cry for our culture, we can’t recuperate it. We need the resources we once had. 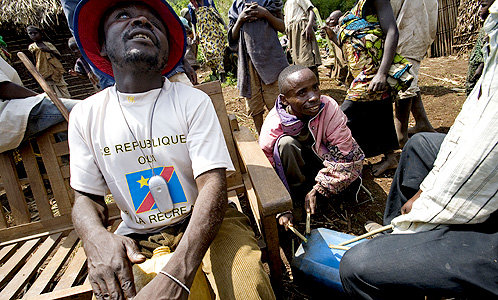 Chief Canetto, in the foreground, speaks of the persecution of pygmies in Congo. Photograph: Susan Schulman

J
How 'Pygmy' People's Rampant Marijuana Use Protects Them