Smoking weed and jogging have more in common than you think. For starters, they both get you high, and they can both make you very hungry.

Biologically, the runner's high and the cannabis high look much alike. The foundation of both lies in the body's endocannabinoid system: a group of "endogenous," or inherently occurring, receptors, lipids, and enzymes throughout the body. These "endocannabinoids" regulate a range of physiological functions, including appetite, pain, metabolism, mood, energy, sleep, and stress responses. They're also the same receptors that cannabinoids, or chemicals in marijuana, act upon when you medicate or get high.

But is it also possible that the two highs may also enhance each other? According to Colorado-based ultrarunner Avery Collins, the answer is yes.

"It's pretty simple. I enjoy going on runs when I'm high," Collins told me. Cannabis doesn't give Collins a competitive advantage, he said, nor does he use it during races, but it makes practicing for those long races all the more enjoyable and helps calm his muscles when he's not running.

While endorphins of course contribute to the runner's high, exercise also increases the body's amount of anandamide, an endogenous "bliss" chemical, or naturally occurring cannabinoid that plays a role in human behavior, eating, sleep, and pain relief. Anandamide acts like marijuana's cannabinoids, such as the psychoactive chemical THC (tetrahydrocannabinol), crossing the blood-brain barrier to activate the same neuronal receptors that chemicals in the cannabis plant do.

"[Cannabis] helps me live right in the moment. It makes things very spiritual. You don't think about anything except the run itself," said Collins. "I use it as a way to intensify and enhance the run. It makes the longevity of the runner's high last longer because technically you're already high."

Collins runs four to five races a year, and each race is between 100 and 200 miles. It could take anywhere from 18 to 30 hours, with not more than a handful of small breaks, each no longer than four minutes. He trains by running up to 150 miles a week. "I'd be lying if I said [cannabis] doesn't help sooth my muscles," said Collins, who hits his vape pen a few times throughout the day, sometimes eats edibles, and wears a medicated patch to sleep at night. When his achilles was severely injured, he used a medicated rub to help it heal.

Most runners aren't drug tested in races, unless they're among the most elite, Collins said. Just in case, he'll make sure to stop using cannabis several days or weeks before a race.

While it's not proven that marijuana would give runners an advantage, it's banned by the World Anti-Doping Agency, an athletic regulatory body, in part because it's believed that it could be a performance enhancer.

Research has also found that athletes opt to use cannabis for its anti-anxiety effects, and its potential to help athletes sleep better before a race. Cannabis can also increase tissue oxygenation, deepen concentration, improve vision, and decrease muscle spasms before, during, or after athletic performance.

For all the reasons already stated, it's no secret Collins gets high: he is sponsored by three cannabis companies, including collapsible bong company Roll-uh-Bowl, medical cannabis company Mary's Medicinals, and edible company Incredibles. He's also an ambassador for The Four-Twenty Games, which puts on active lifestyle events in legal and medical states to combat the lazy stoner stigma.

So while there's little evidence to suggest an explicit connection between cannabis and running performance, it does help athletes with the symptoms of running - everything from boredom to pain. "Everybody likes to overanalyze it," said Collins. "I'm not looking for any kind of advantage. I like being high and going on runs. It's fun, it's freeing, and it's a good opportunity to escape from the rest of the world." 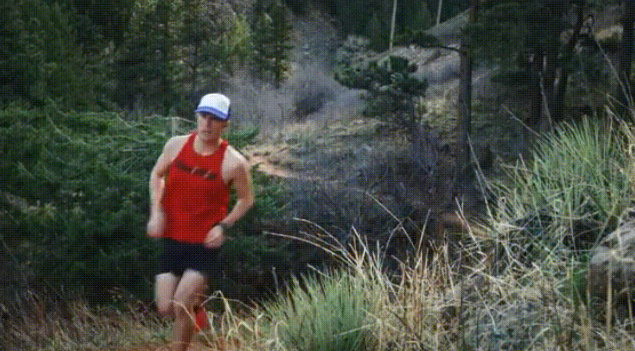 Can Cannabis Help You Get In Shape