Welcome To The Late Scrog

My first grow went fairly well. Started with 4 clones of what i only no as berrys, veged for 4 weeks then flowered for a little over 8 weeks in 20l of biobizz all mix,
absolutely no training just fed bio bizz and left to them to it,
I had a small spider mite problem but just before swithing.
yeilded around 308g.
So thats was my bench mark and hoping to increase the yeild this time round.

December came and with that 4 new cuttings of the same strain.
This time though the clones were rooted and left out side
But as the days began to shorten they started to flower, the previous owner of said clones brought them inside where they sat under a small cfl for a couple of weeks before i got them.
By the time i got them they looked horrid,long tall sticks with bearly any growth other than the strange scrawly revegged single finger leaves.

After researching and tirlessly scrolling through a sea of pictures i finally found what it was.......... Monster clones.......

As the weeks progressed the growth started very slowly and in very strange patterns, nothing i had seen or read on the net looked like these, I thought they would surly die and id have to start again.

Plagued with freezing temps in my rickerty old shed where the tent and girls lived they began to show signs of life a new shoot a here new leave there, a glimmer of hope. Some weeks later
Checking on 1 of the bigger girls confirmed to me that the 20l pot she sat in was bound by rope like roots, a new home was required.. All i had around at the time where some massive 50l pots so they will have to do i thought.
So into there new pots they went.
The next week or so saw them nearly double in thickness

My now 60 day girls are pushing forward beautifully so much so i have decided to install a scrog net to try and control the growth
Most whould say dont bother and 'its a bit late' but there are so meny side shoots top shoots all kinds of shoots lol sprouting up all over i fear if i didnt do somthing the bottom 70%whould not progress and see the light. The foliage is so thick

So at day 60 scrog has gone in,
i need to complete the weaving of bountyfull shoots throughout the screen and hopfully switch in the next week or so for a mid April harvest.
Hopfully beating my previous efforts.?? 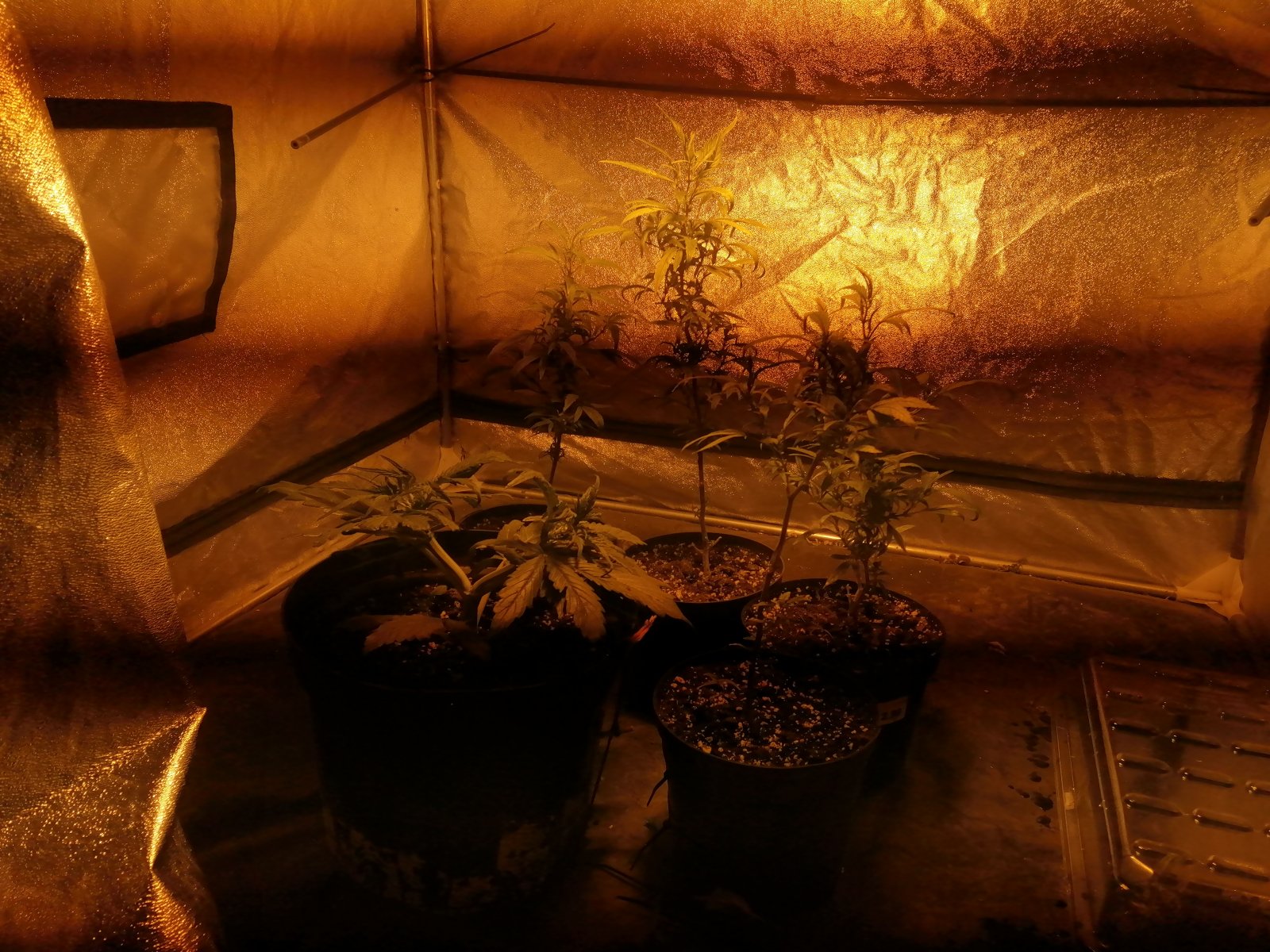 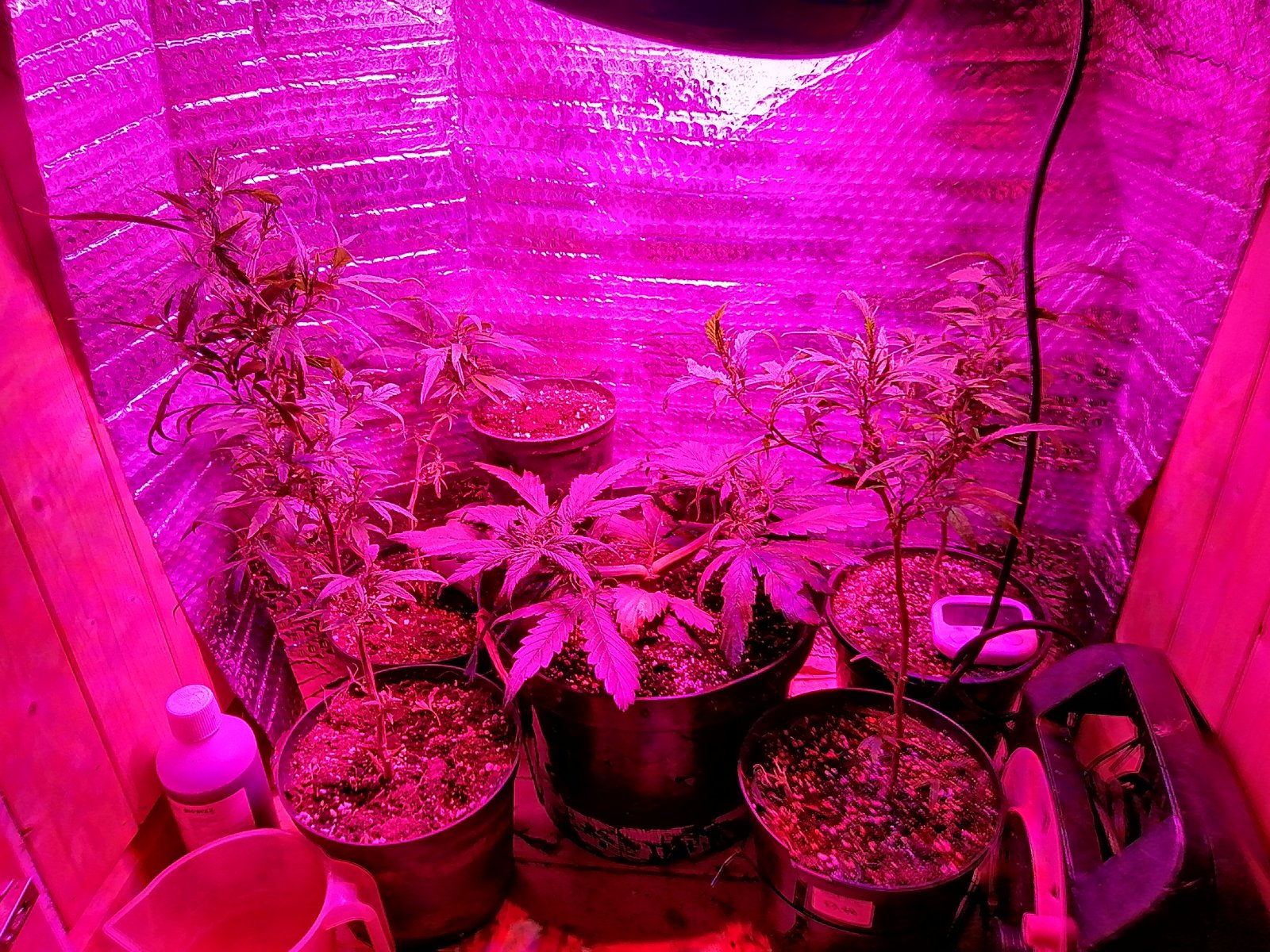 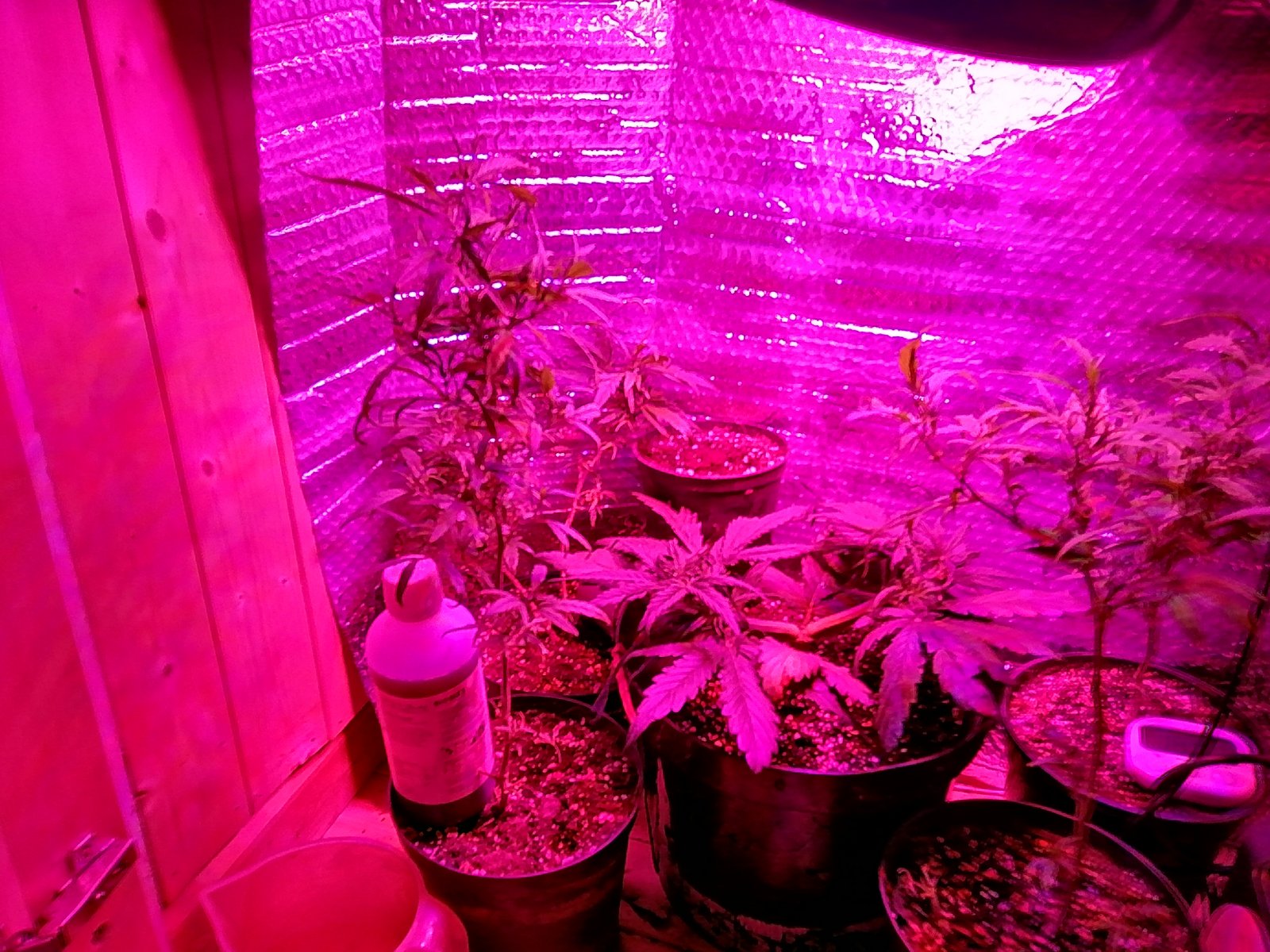 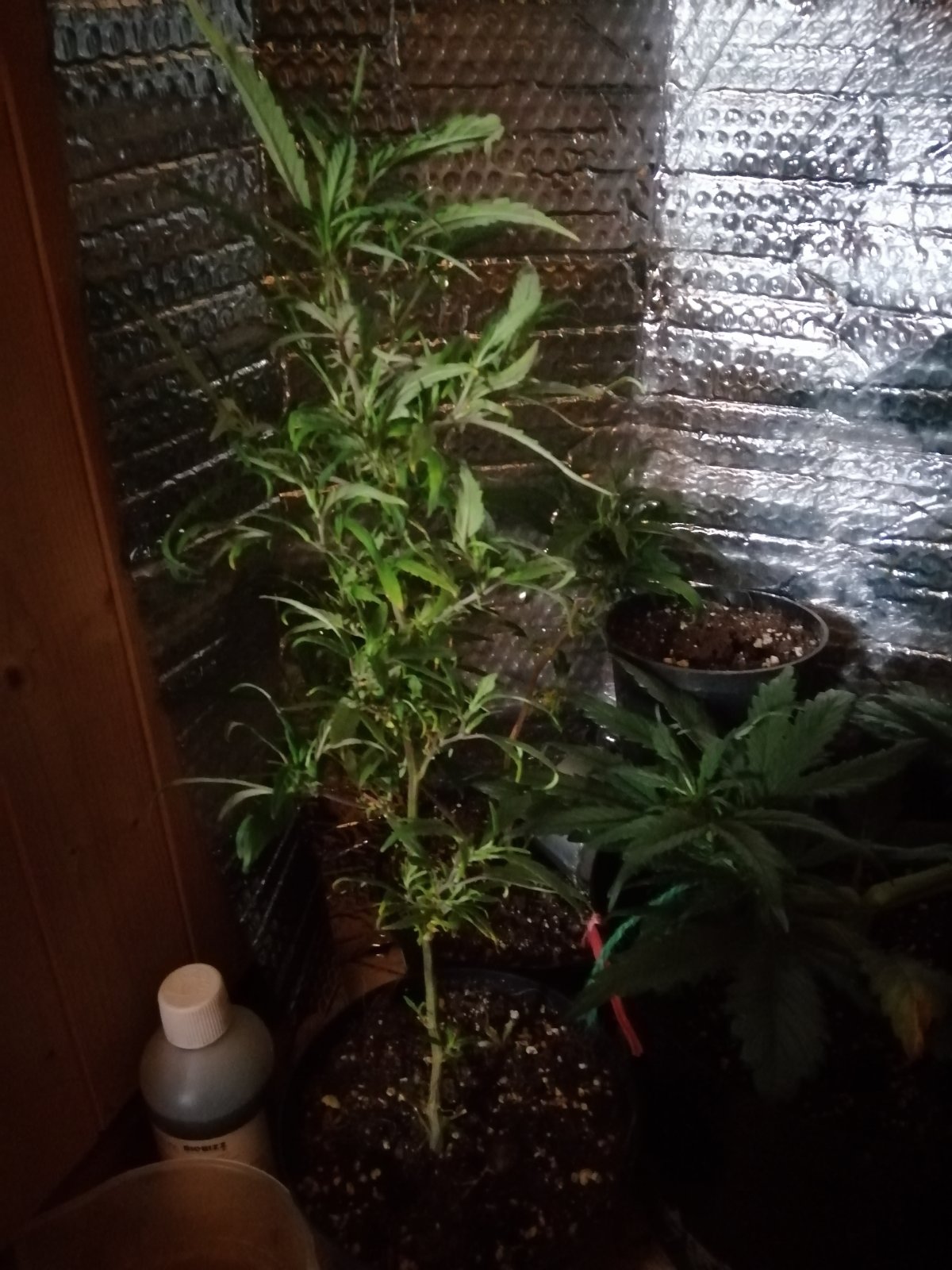 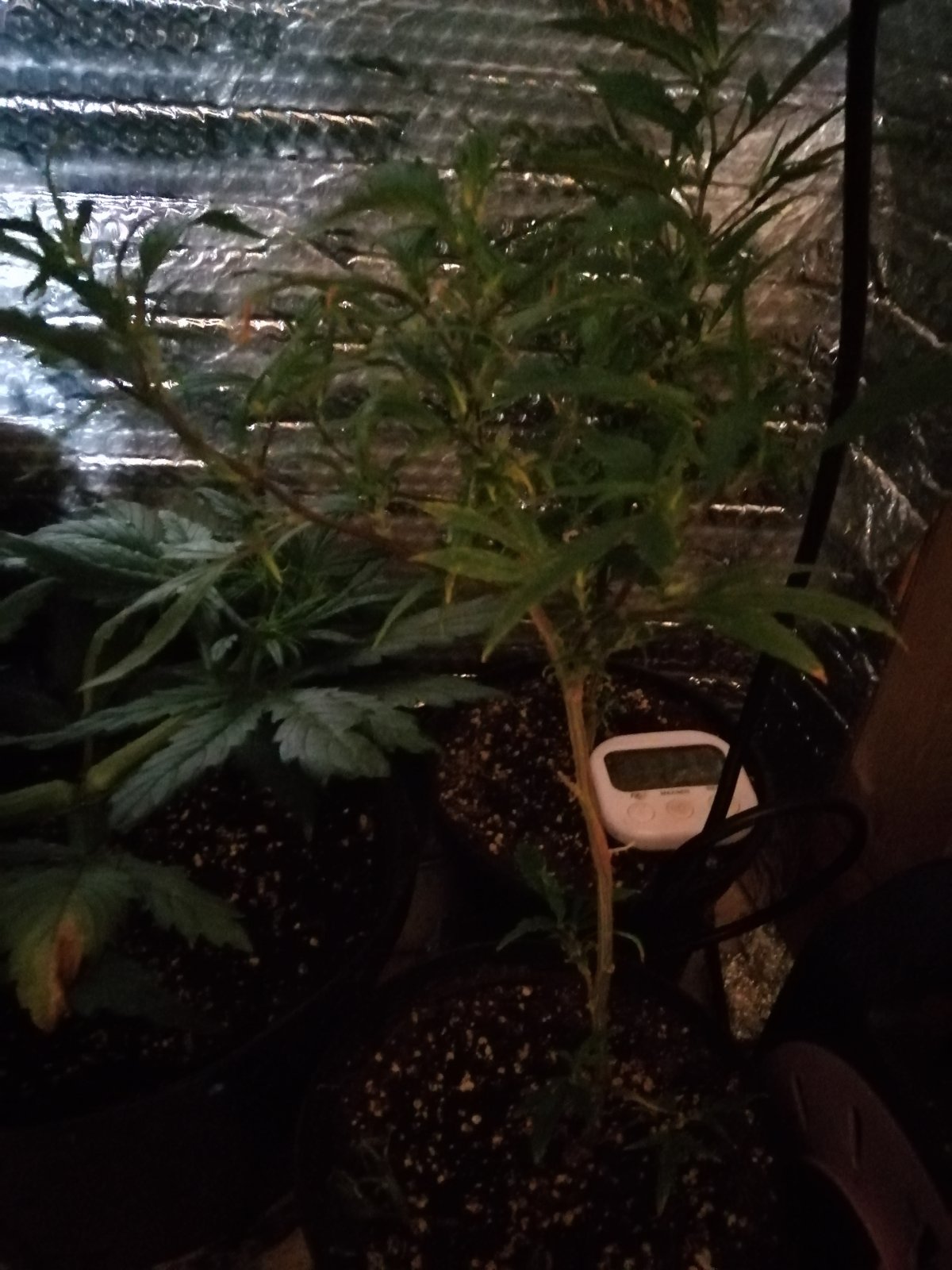 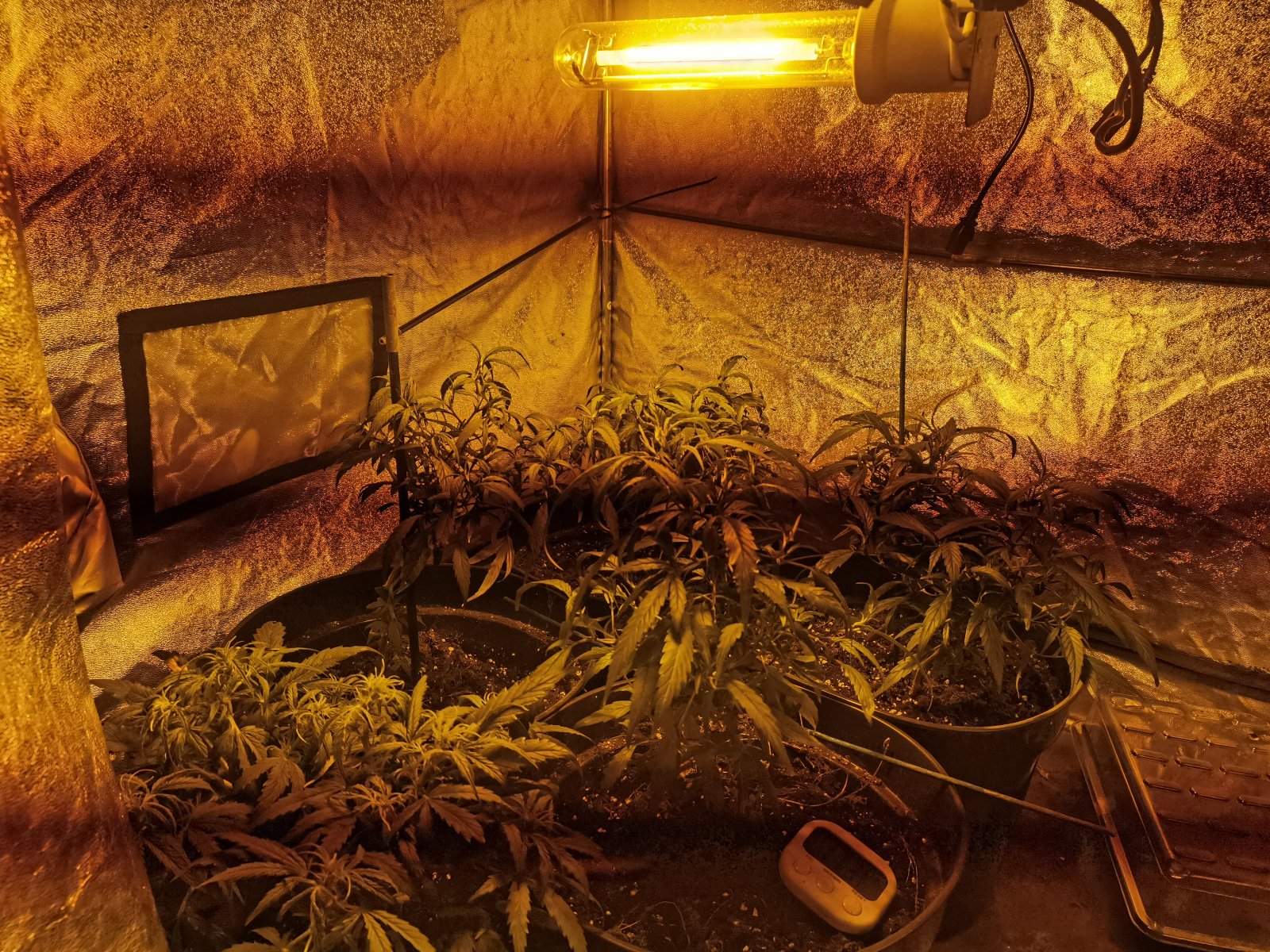 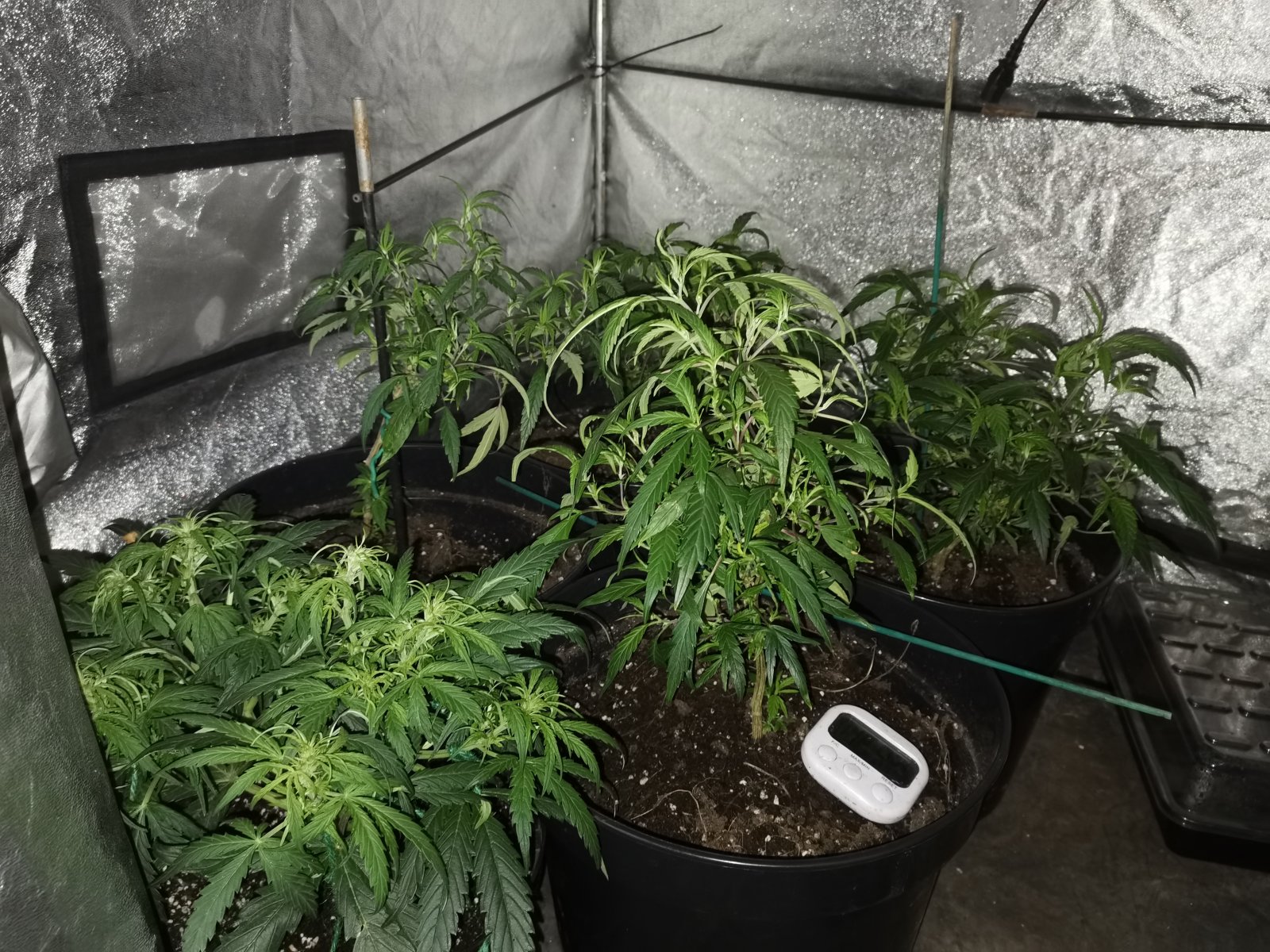 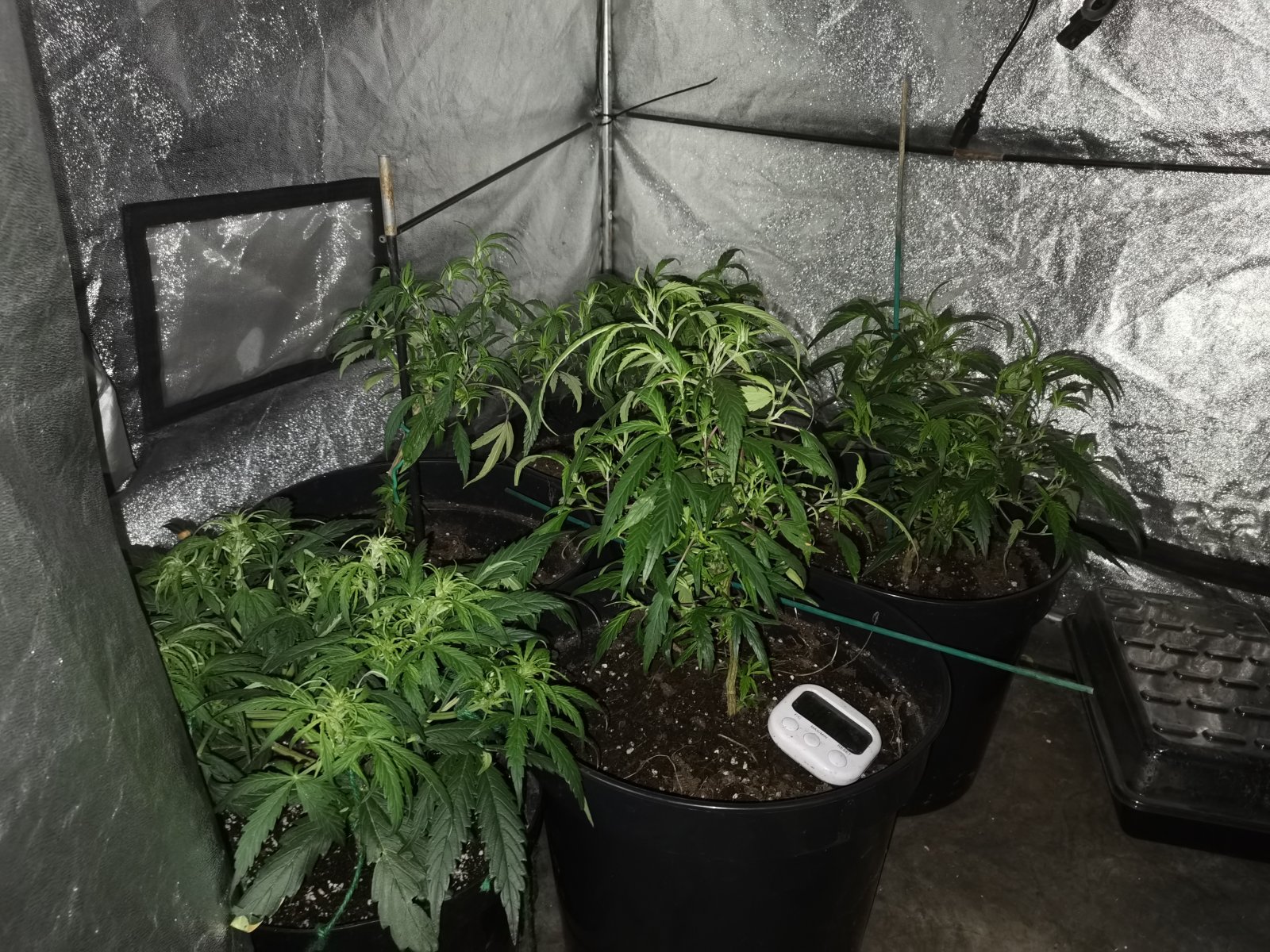 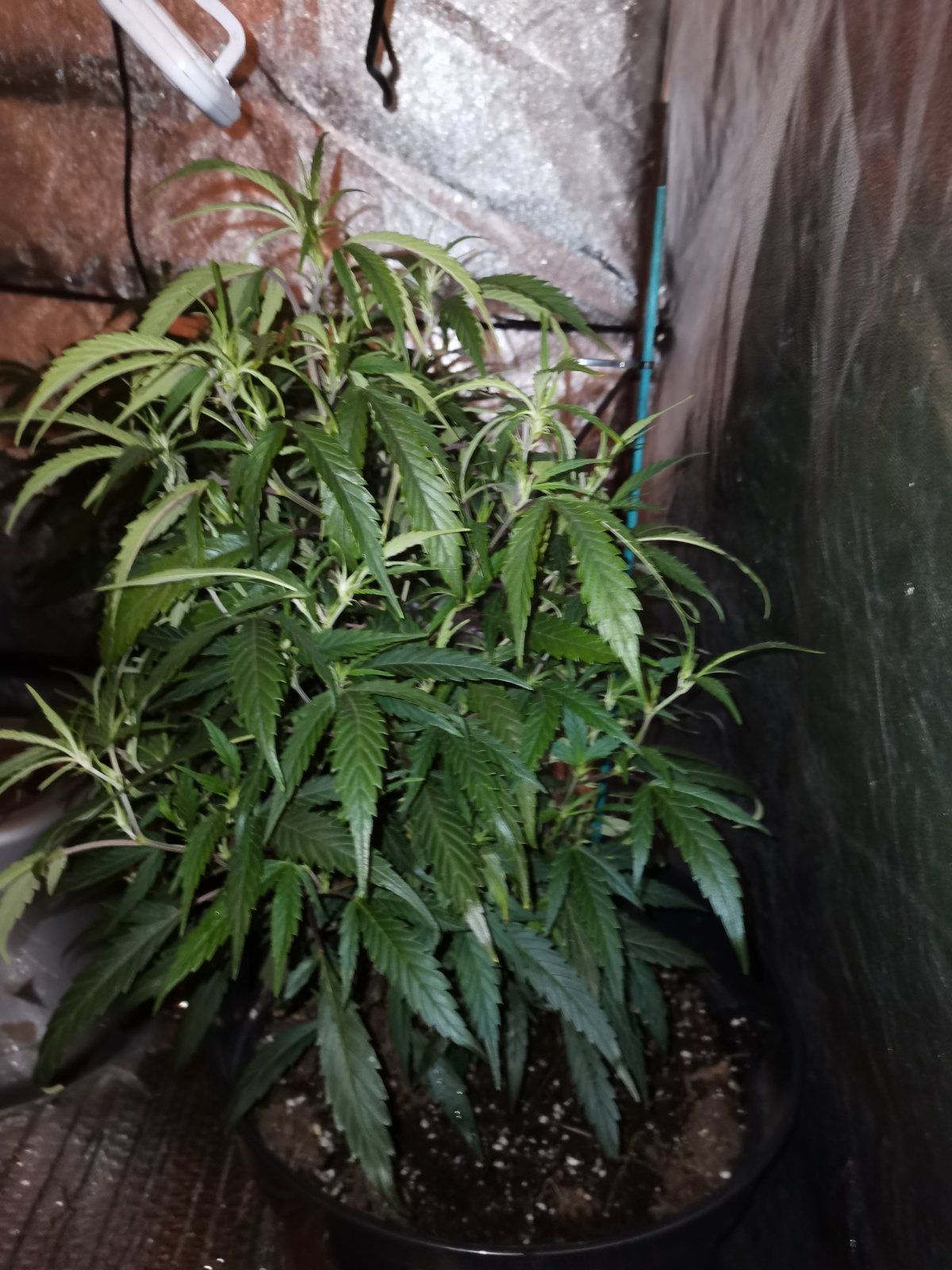 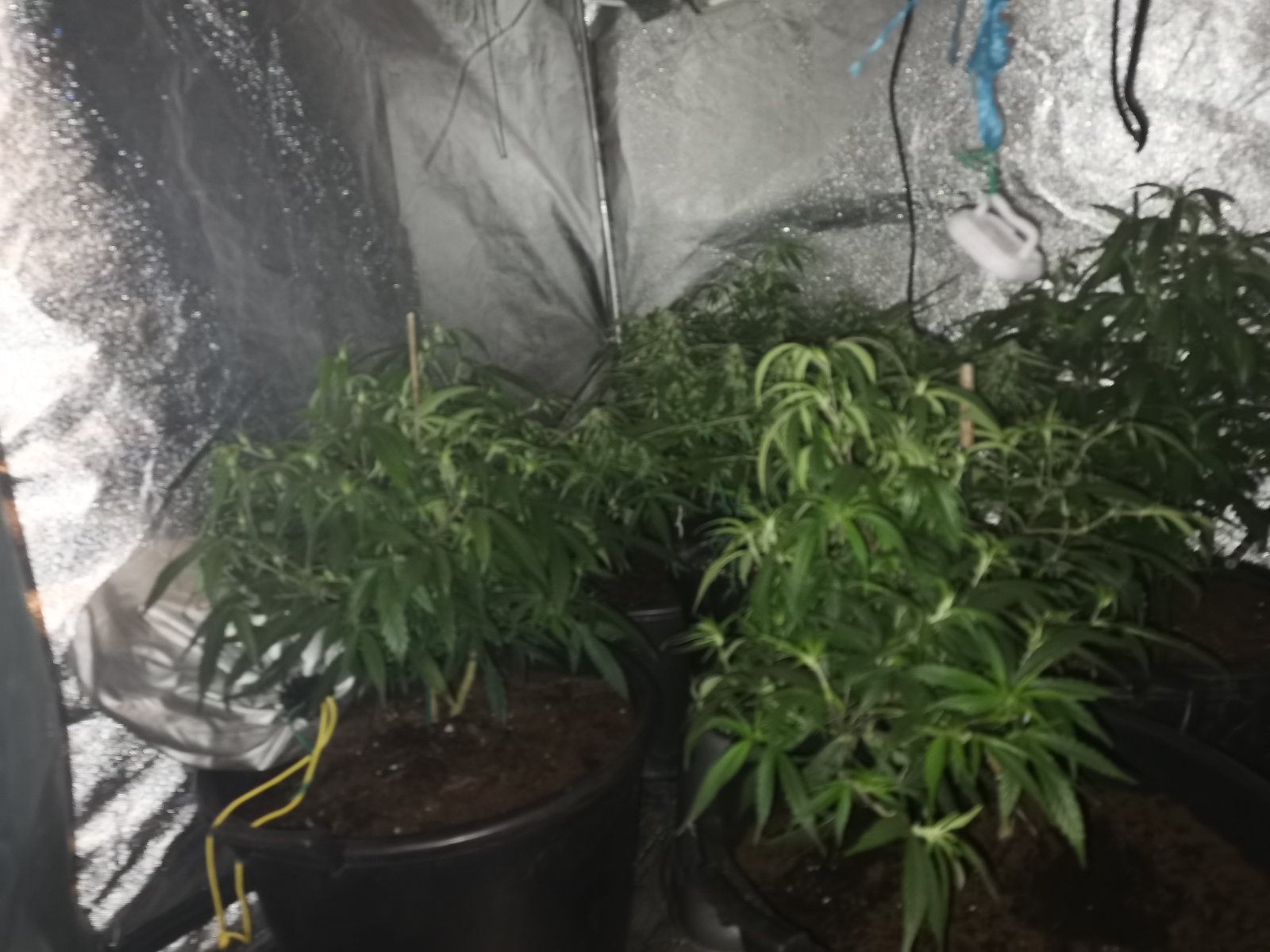 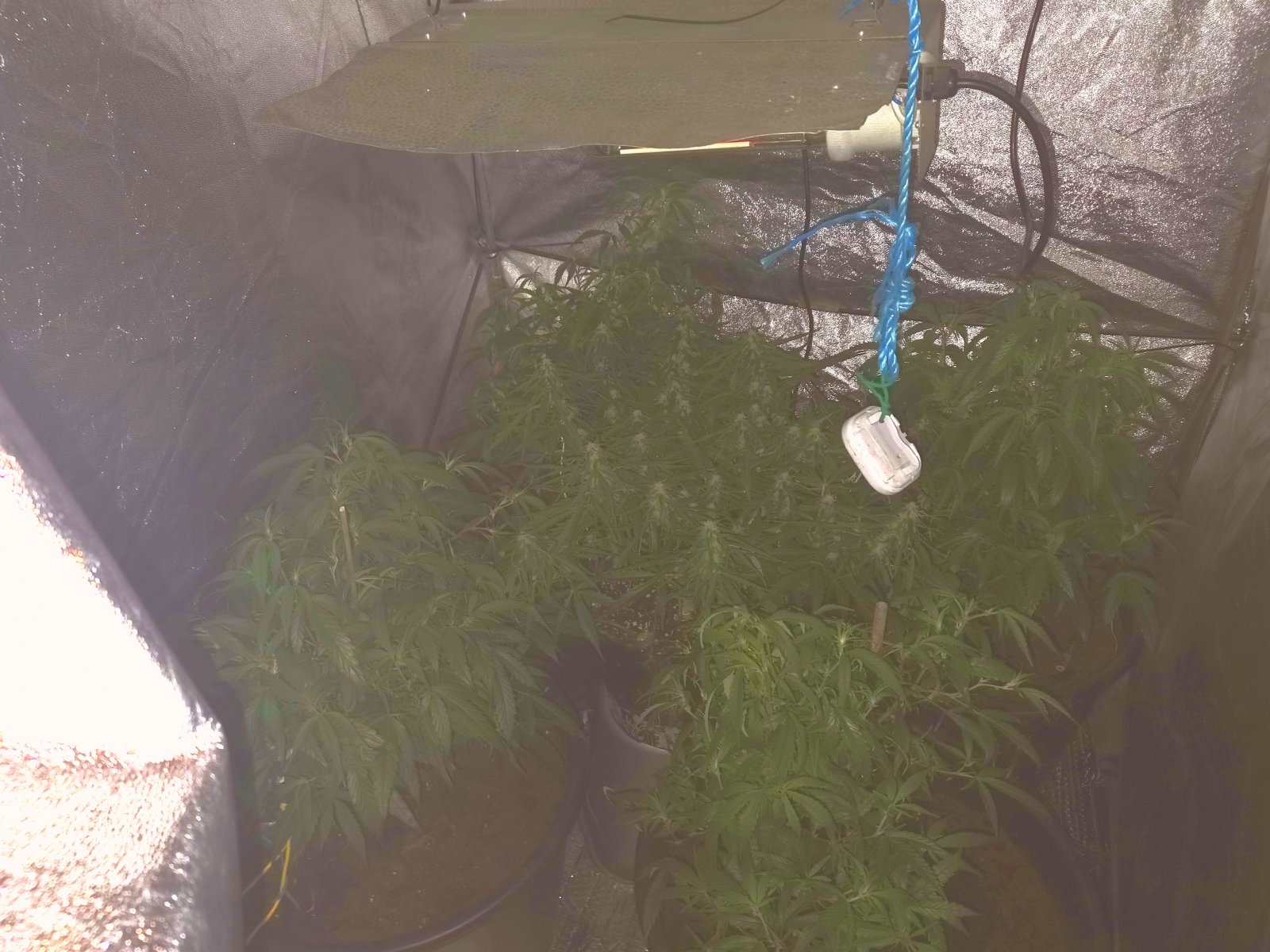 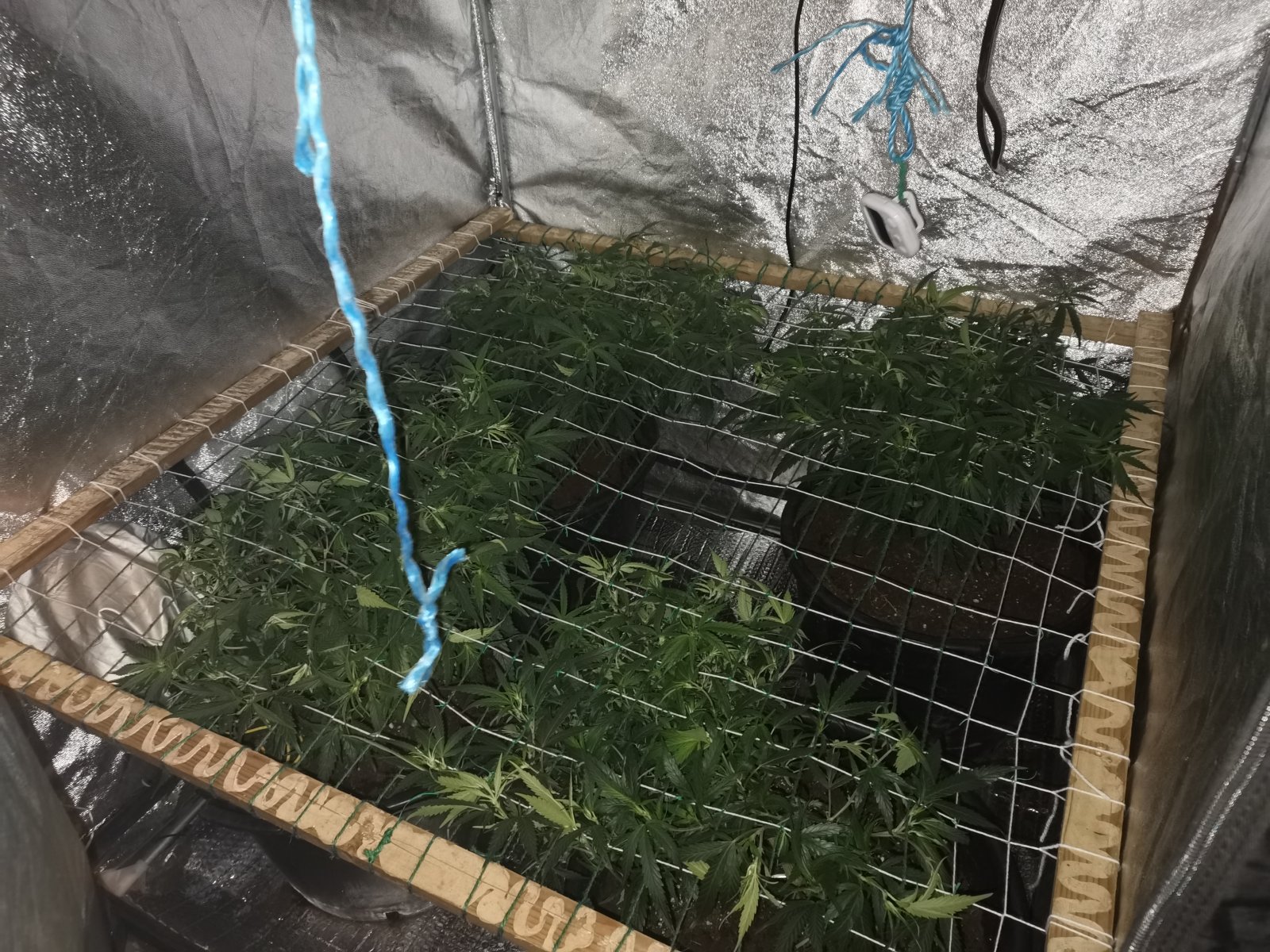 Looks good man. Should be able to flip pretty quickly since those plants seemed prepped. I setup a scrog for my current grow too. Happy growing.

How about posting a Medical Marijuana Strain Reviews

If you need any help with posting photos, please read our Photo Gallery Guide - How to Resize, Upload & Post Photos.

Forgot about this
So from the last pic i ended up doing away with the scrog just didnt like the way it sat on the gals. Thay where far to branchy i think itvwas they where monsters. Any way i veged abither week for a total of 9 weeks repotted to 53l pots cleaned the bottoms up abit then switched
Had some very cold temps for about 4 weeks which has held them back then in late flower my timer broke while i was away. Other wise no problems
The nutriants im using are monkey nutriants and to be fair i cant fault them
Im now in to the last week or too i think
The gals are flowered nicely albeit small bud size but they stink and are sticky as