A group of 22 West Virginia business and government leaders has returned from a fact-finding mission to Colorado to learn best practices from Colorado leaders involved in that state's medical cannabis industry.

West Virginia approved legalization of medical cannabis, with implementation beginning July 2019, according to a report from the West Virginia Hospitality and Travel Association.

The delegation was sponsored by the West Virginia Hospitality and Travel Association, and all West Virginia representatives traveled to Colorado with no tax dollars spent.

Much of the trip was spent in conversations with Colorado Gov. John Hickenlooper; past and present industry regulators, delegates and state senators; the former director of licensing; and the former state tourism director.

The group toured an indoor cultivation facility, a processing facility and a dispensary that sells and grows cannabis.

"Colorado is a legal cannabis pioneer, and we appreciated their leaders' candor as they shared best practices and challenges they faced in steering this emerging industry to success over the past decade and a half," said Dave Arnold, co-founder of Adventures on the Gorge, an adventure resort in

Southern West Virginia's New River Gorge. "This information will be immensely valuable as West Virginia develops its medical cannabis program, with the goal of becoming one of the best in the country."

Arnold has long been active in West Virginia's tourism industry, and he serves on the state's tourism commission.

In a meeting with the West Virginia contingent, Gov. Hickenlooper recounted the state's experiences developing rules and regulations for medical marijuana. Gov.

Hickenlooper noted that Colorado has the lowest unemployment of any state in the country and has been very successful attracting young and mobile people looking to launch and build careers in areas they consider to be progressive.

"The intent of this trip was to learn as much as we could about successes and potential speedbumps from the state that was among the first down this new road," said Carol Fulks, executive director of the West Virginia Hospitality and Travel Association. "I cannot say enough about how cooperative the entire team from Colorado was in sharing their experiences, and we are immensely grateful for their time and insights."

Studies indicate that medical cannabis is an effective treatment for Post Traumatic Stress Disorder (PTSD) and chronic pain (CP) where it is associated with a reduction of opioid use of up to 64 percent.

Arnold and Fulks were impressed with the professionalism within the industry. One example was a family-owned and operated growing facility with 500 employees and 45 compliance officers operating in an environment featuring frequent regulatory changes.

Many of those regulations were similar to those found in other business ventures, according to the owners of the growing operation. A consequence of the industry growth has been significant increases of rental prices of industrial buildings that can accommodate these operations.

"While two years may seem like a long time to implement the structure and rules for medical cannabis following West Virginia's approval during the 2016-17 legislature, we want to build upon a strong foundation to ensure the job is done properly," said Arnold. 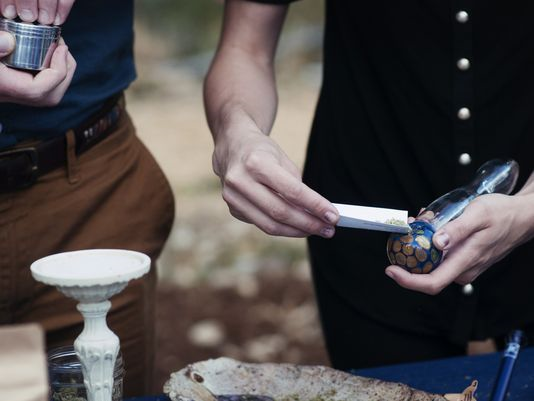