What is an Hermaphrodite?

An hermaphrodite, or hermie, is a plant of one sex that develops the sexual organs of the other sex. Most commonly, a flowering female plant will develop staminate flowers, though the reverse is also true. Primarily male hermaphrodites are not as well recognized only because few growers let their males reach a point of flowering where the pistillate would be expressed.

Hermaphrodites are generally viewed with disfavor. First, they will release pollen and ruin a sinsemelia crop, pollinating themselves and all of the other females in the room. Second, the resulting seeds are worthless, because hermaphrodite parents tend to pass on the tendency to their offspring.

Please note that occassionally specious staminate flowers will appear in the last days of flowering of a female plant. These do not drop pollen and their appearance is not considered evidence of deleterious hermaphroditism.


Here's an image of a hermaphrodite, specifically a female plant with staminate flowers. 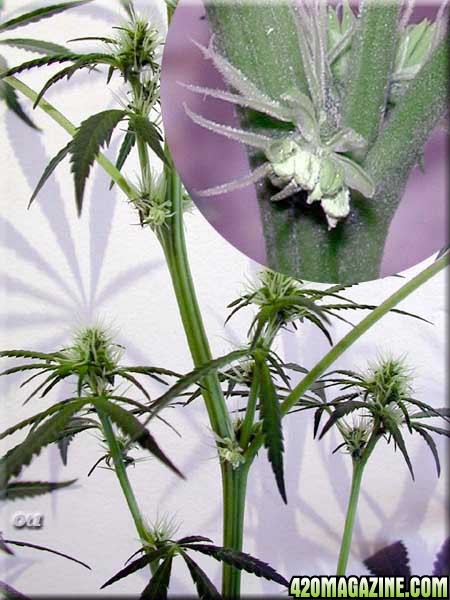 Hermaphrodite photograph above by Ot1. 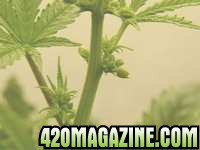 Hermaphrodite pics above by snoofer

Is it a Hermie that is used with a female plant that gives feminized seeds?

siscokid said:
Is it a Hermie that is used with a female plant that gives feminized seeds?
Click to expand...


Yes you would use the pollen from the hermie to pollinate your female plants to get the "feminized" seed.

BUT companies don't just use any hermie, they will test for a female that when stressed stays female, then spray with hormone to make male and collect that pollen.

Interesting, thanks for the bit of info
J

if a Hermaphadite breeds with a normal female plant ,will you get "good" seeds from it ????

jrdn1489 said:
if a Hermaphadite breeds with a normal female plant ,will you get "good" seeds from it ????
Click to expand...

Hey, jrdn, I just asked the same question ^ look up here. LOL. Welcome to 420 and every question you ask is a valid one. I am a little "green" but have learned from trial and error so you can ask me or any of the other more seasoned growers any question you have. Take it easy and happy growing! 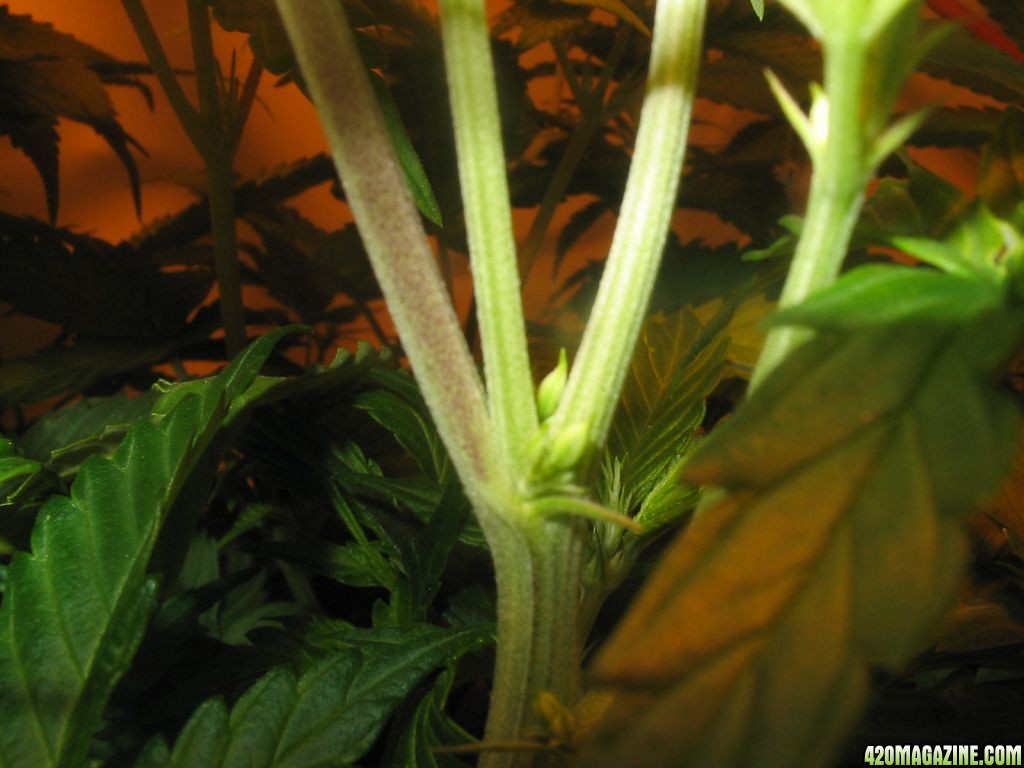 Hello comrades, I have found some suspicious looking growth on my Rock lock and hope it's not a Hermi-flower.

I think it's not but better safe than sorry...
M

I am sorry that picture isnt clear enough for me to tell. It certainly doesnt look female, if its even a flower. Are you currently in 12/12?? It looks more like a new shoot of leaves to me. But if you arent vegging, and your light schedule is 12 on 12 off, then its more than likely just a male. I dont see any pistils...
The Only Way to Free Yourself Is Your Mind

Thanks for the help MJGenius, I done wasted the traightor! Bless you and your grow.
G

I have 6 plants flowering for 2 weeks. 2 of them are hermaphrodites.
They are very large and bushy. The mother the seeds came from was high end and I would like to continue with these. I want to take the other 4 back to vegging until the hermaphrodites are done. Then I will vacuum and clean the room before the others enter. Is that an acceptable idea.
Thank you, gawcrea
V

gawcrea said:
I have 6 plants flowering for 2 weeks. 2 of them are hermaphrodites.
They are very large and bushy. The mother the seeds came from was high end and I would like to continue with these. I want to take the other 4 back to vegging until the hermaphrodites are done. Then I will vacuum and clean the room before the others enter. Is that an acceptable idea.
Thank you, gawcrea
Click to expand...


Sounds like a reasonable plan. As long as you have a large enough flower room to grow the ones that you will continue to veg, they will at least double in size once they are flowering. Make sure the other plants are nowhere near your male herms. GL.

I do not, nor do I intend to buy, sell, cultivate, manufacture, or use any illegal substances. Any postings I make on this forum are purely for entertainment purposes. Any pictures that I may post have been created by artificial means from images gathered from the internet and other sources. Any statements made, other than this paragraph, should be considered for entertainment purposes only.

Do everyone on this planet a favor and don't do hermies, just notice it, and then rip it out like you would a male... Sensi doesn't like hermies.

But if you are going to do it, manage it like a pro...
:smokin: CA Prop 215 Qualified Patient

siscokid said:
I have found some suspicious looking growth on my Rock lock and hope it's not a Hermi-flower.

I think it's not but better safe than sorry...
Click to expand...


My latest journal has a pic of my plant going hermie... its hard to tell especially when the male part is sitting around female pods...
:smokin: CA Prop 215 Qualified Patient

Kingsativa03 said:
alright but again will it be that the buds will have seeds or it just wont flower?
Click to expand...


King,
You'll have seedy buds! And the hermie can pollinate you other plants, so it could create a seed crop. You'll still have buds, but a lot of seeds.

Sisco,
I just read about DM's Reverse spray that is supposed to revert the flowers back to female. Has anyone used this? I would think if you only had the one plant and were counting on it to produce a little personal stash it may be worth trying. But, if you have multiple plants, I would just kill it.
Current: 7.0
Finished: 3.0 4.0 5.0 5.1 6.0 6.5
Lessons Learned
LED Buyer's Guide
Monthly Contests
G

thank you for your replies. I pulled them out.
That was a while ago. Since then I have found seed on another 5. I pulled them as soon as I discovered them. However some of them ended up having just a couple of seeds and feel as though they would have been alright.
I read somewhere that some strains have a few seeds but are ok.
I let them go and they were all right. Just a couple of seeds.
everything in my grow room seems to have stabalized, no seeds.
So now I am not sure when to pull and when to let them go.
I went into my room with a green light and plugged any light, no matter how dim.
I concidered ripping everything out and starting over but did not and like I said everything is stable again. The last one I pulled was close to fruition anyway but when I found a seed I pulled her. That was the only seed in it. So there are seed situations that are not hermis but just a stray seed. Does anyone have this couple of seed scare.
One more thing. Pollin. I have not seen any yellow, even with a microscope. Can you see the yellow pollin? That is the problem, right. Is there a stage when you can tell when it is going to pollinate. To pluck or not to pluck, that's the question. thank you gawcrea
M

hi fellow growers. been ages since i've been here. Puter problems. i got a hermie and really hated to remove from grow but. . . ya do what ya gotta. My beauties have massive white hairs sranding up and out, begging for a pollen molecule to have sex with. No, No, all virgins in my garden of eden. So, i thot of casterating the herm but thats a job. this am I spotted another hermie. DAMN< that pisses me off. I only grow a misdemeaner amt so i cannot aford to loose them. is pulling them the only choice? what about the spray i read about here? N E tryers? let me kno. thanx, madmedmary.
P

I might be in the wrong thread but I have a question...... A couple of years back I had successfully grown a decent strain indoors. A clone from that plant got a bit stressed but it finally got going. At the same time I regenerated the original plant. Had both going in the same area. By harvest time 10 or 11 weeks later both plants had seeds and buds. Now fast forward a couple of years. Just sprouted a decent seed in July. switched the lights to 12/12 3 weeks ago and it appears the girl has boy parts too. My question is: Could there be pollen left from the morphs a couple of years ago, could that have caused the morphing now? And since I seem to flowers now, how can I clean the area to make sure no pollen is left for the next girl? Or is there no problem at all?? Thank you in advance
:smokin:
P

Please disregard my above question. I got answers in the FAQ section. Thanks!

In the "Bargaining Phase" of grieving

My first grow. I hermied 4 of 4, multiple stressers including extraneous light, over fertilizing, root bound, overwater, underwater... Other than my grow conditions were PERFECT! LOL.
Apperently went herm some time into bloom cuz there are TONS of trichomes.
My questions:
1. since there are tons of full trichomes, shouldn't these Caitlyns still be plenty potent?
2. From what I'm reading on a number of sites, all o the seeds should be fem, but could have a predisposition toward herming.

Of course I'm cleaning the room thoroughly before putting any more ladies in there. 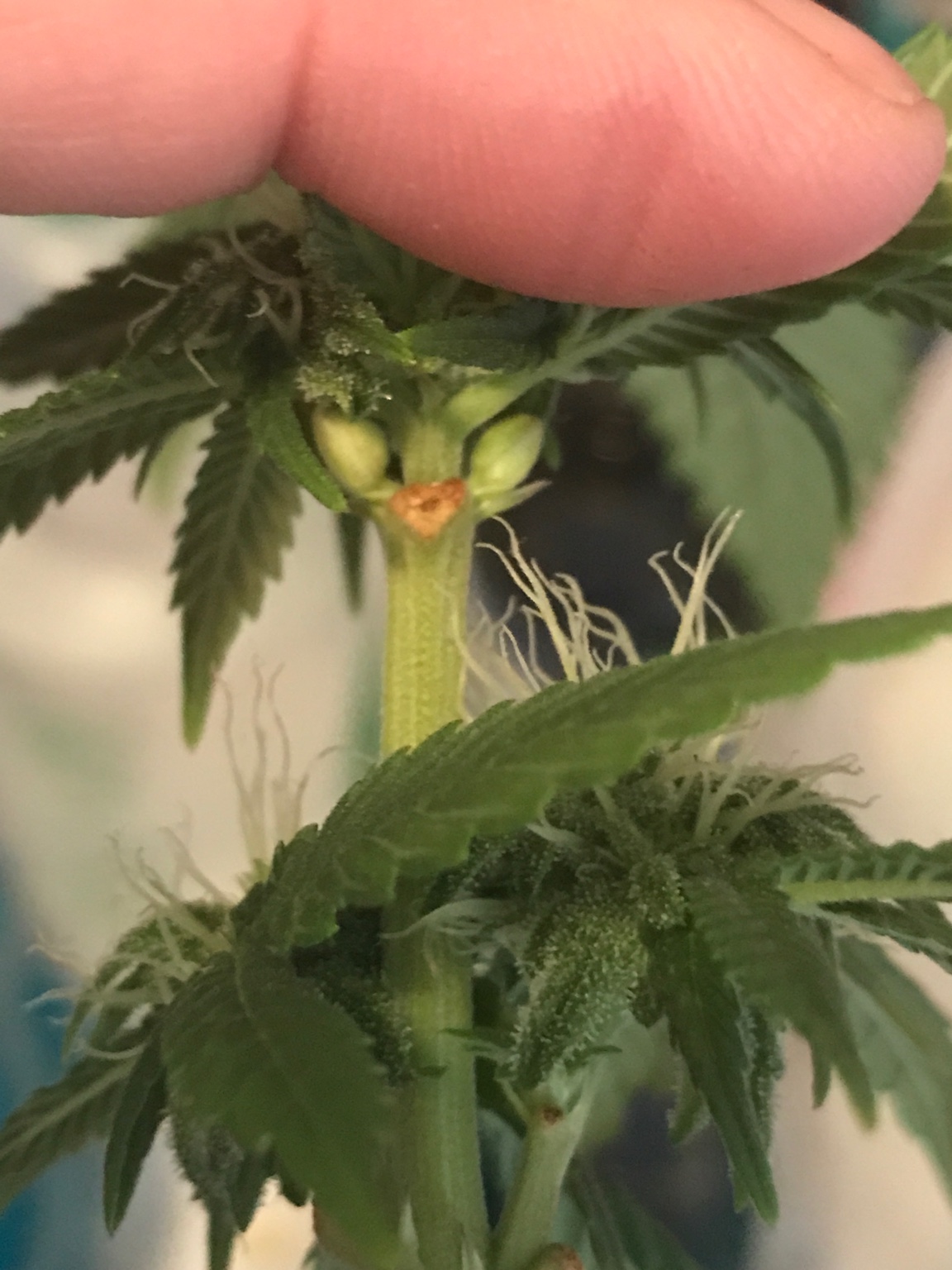 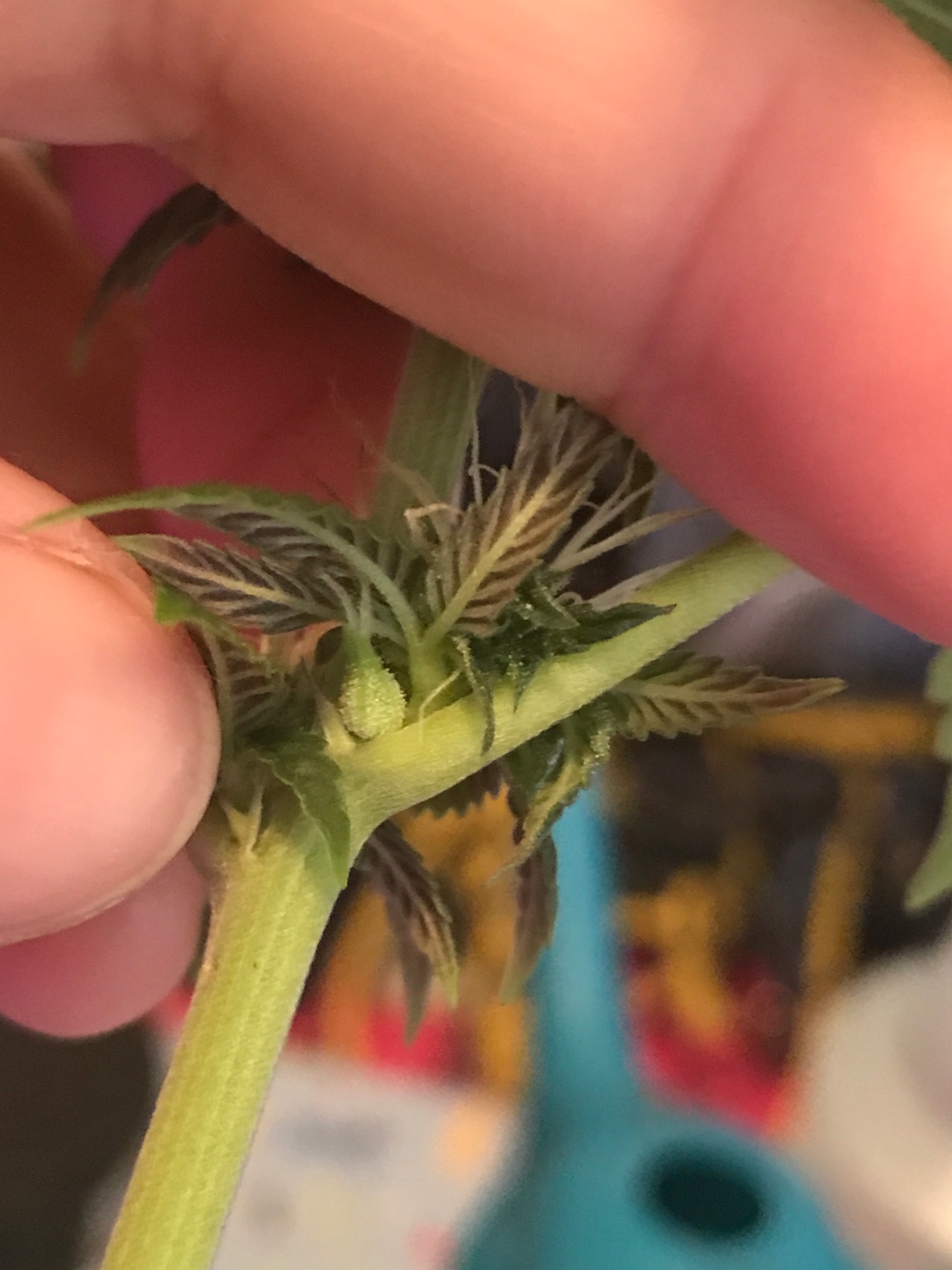 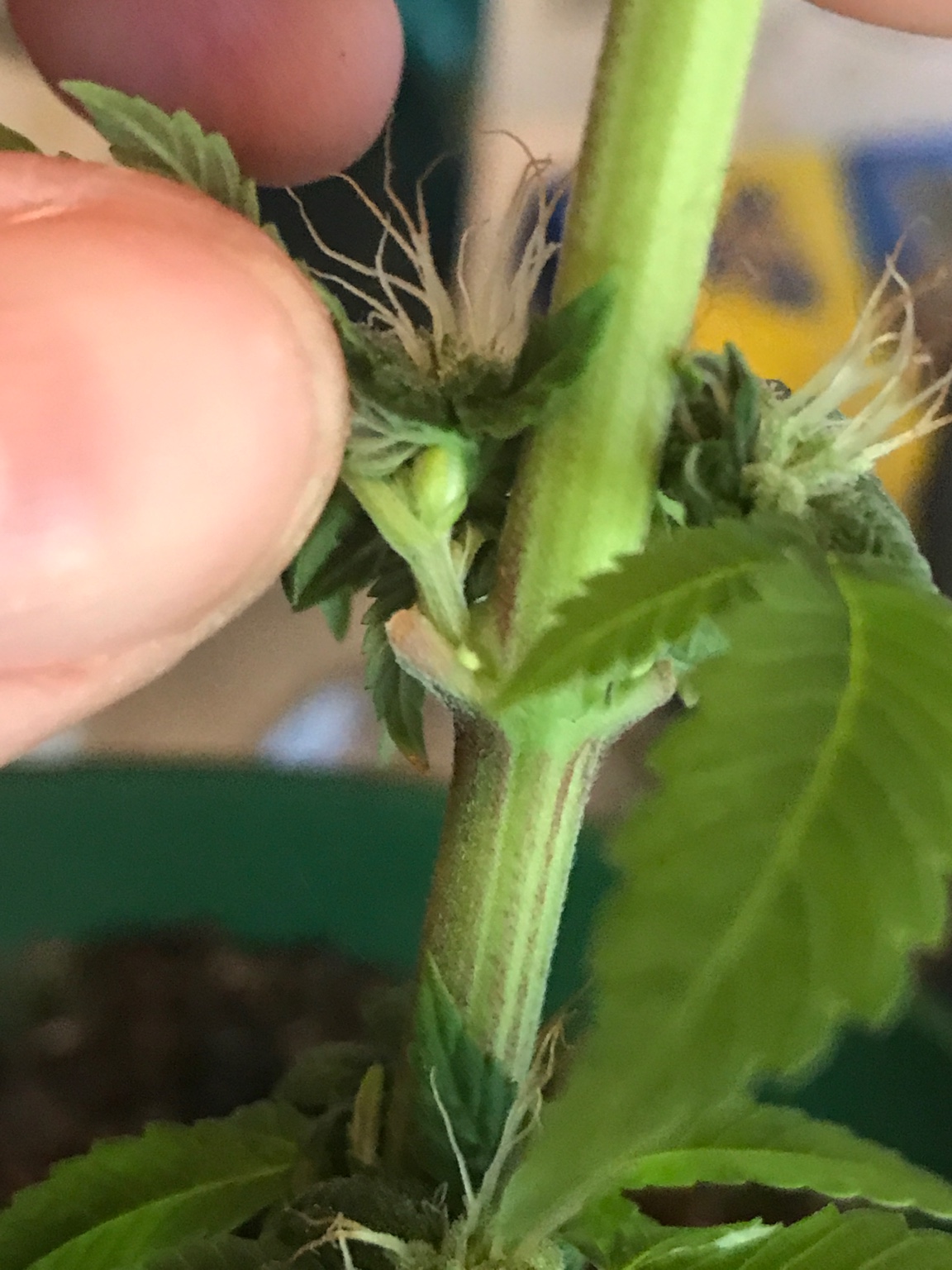 These girls have been pretty stressed so it's not surprising. I pulled them and there is one left and doesn't seem to have balls but I'm wondering about these 2? The first pic is plant 1 and the last 2 pics are plant 2 TIA
Newty’s Perpetual Pantry Party & Outdoor Grow Show COMPLETE

What are all Female Seeds and How are they Created?