What's Next For Cannabis In Congress?

Activists cheered a House vote last month to bar the federal government from interfering with state medical marijuana laws. It was a watershed moment for pro-marijuana advocates and lawmakers on both sides of the aisle who have been waiting for years for Congress to take an affirmative up-or-down vote on any related issue. But in the afterglow of this long-sought legislative victory, it's not clear just what comes next. Will bipartisan support for the measure, adopted as an amendment to the House's fiscal 2015 Commerce-Justice-Science appropriations bill, inspire future action in the chamber? Will the Senate, poised in the weeks ahead to consider its own C-J-S bill, follow the House's lead? That the House had a vote on this amendment at all was unusual. Unlike in the Senate, the House Republican majority allows appropriations bills to come to the floor under open rules, meaning that any lawmaker can force a vote on an amendment deemed related without having to ask party leaders for permission.

That's what happened during the dark of night May 30 House vote, before lawmakers went home for recess. (The amendment was approved 219-189.) Allen St. Pierre, executive director of the National Organization for the Reform of Marijuana Laws, told CQ Roll Call it's important to keep that in mind when evaluating what advocates can realistically expect going forward. "It wasn't a whipped vote," St. Pierre said. "Those who voted for or against it were pretty confident that it wasn't going to go too much further than what passed last week. ... They saw this as a freebie." St. Pierre added that there are senators "who would rather impale themselves on a sword in the middle of the Senate floor than ever vote for anything at all that would diminish or retard" the federal prohibition on marijuana legalization. But Rep. Earl Blumenauer, one of the biggest stalwarts of legalizing marijuana, doesn't agree that this will be the last word on the subject before the end of the 113th Congress.

The Oregon Democrat, who co-sponsored the House amendment, told CQ Roll Call he has had "several conversations" with senators who might champion a medical marijuana amendment in consideration of the C-J-S bill. Plus, senators marked up their version of the spending measure in the Appropriations Committee last week, and adopted language blocking the Justice Department from using funds to deter research on industrial hemp.

Blumenauer also thinks two stand-alone measures he's introduced could pass. A bill that would allow legal marijuana businesses to benefit from tax deductions could become an amendment to a tax extenders package. Another measure, which would permit such businesses to hold bank accounts, could hitch a ride on financial services legislation. "There are number of things I think can happen between now and the end of this congressional session," Blumenauer said. "I'm not at all discouraged."

In the immediate aftermath of the vote, before practical conversations about next steps got underway, supporters celebrated what was undoubtedly a symbol of shifting public opinion on the issue. The vote breakdown illustrated that fact – the bipartisan coalition of sponsors included Blumenauer and ultra-conservative California Republican Dana Rohrabacher, and the votes for and against the amendment defied the typical partisan, ideological, socioeconomic and geographic fault lines.

Straightforward, up-or-down votes on the question of marijuana are few and far between in Congress, and advocates seized on the breakdown as a way to gauge where members stand. For years, groups such as NORML have had to rely on less scientific ways to quantify lawmakers' positions, such as collecting letters to the editor and details on support from constituents back home. "If nothing else, when those votes came in, I could have just crossed off the vote's title and wrote in, 'NORML's friends and enemies list,'" St. Pierre said.

A week after the dust settled, the "Vote Medical Marijuana" campaign housed within the advocacy group Americans for Safe Access demonstrated what else it could do with that kind of information. On June 5, the organization announced it would air 30-second TV spots on MSNBC in Maryland and South Florida to target two members who voted "no" on the C-J-S amendment – Republican Andy Harris and Democrat Debbie Wasserman Schultz. Americans for Safe Access spokesman Kris Hermes said the group hopes to run ads against other members leading up to the Nov. 4 midterm elections. "I'm not going to say people shouldn't vote for Wasserman Schultz or Harris, but I think it should weigh heavily on their decision on who to vote for, and our goal is to have a federal legislature, a Congress, that is voting consistently with the interests of its constituents," Hermes explained.

Wasserman Schultz and Harris responded to the ads by defending their positions in written statements. "I do not believe, regardless of the issue, that it is appropriate to limit the Executive Branch's ability to enforce current federal law at their discretion," said Schultz, who is also the Democratic National Committee chairwoman. "As a cancer survivor, mother and lawmaker, I am acutely empathetic to the suffering of people with terminal illnesses and chronic pain."

Harris, who was an anesthesiologist before coming to Congress in 2011, had a more technical gripe. "The term 'medical marijuana' implies that marijuana is not like any other medication that a physician, like myself, would prescribe," Harris said. "It's not." Whatever happens, there are members who support expanding access to marijuana who refuse to be daunted by political realities in the face of an exciting time to be working on the issue.

Count Colorado Democrat Jared Polis, another co-sponsor of the medical marijuana amendment, among them. "History was made by politicians from both sides of the aisle, as we now have a majority of Congress on the record saying that states have the prerogative to regulate marijuana as they see fit," Polis, whose state recently legalized marijuana for all purposes, said in an emailed statement. "I don't know where this bill is going, but it sends a message." 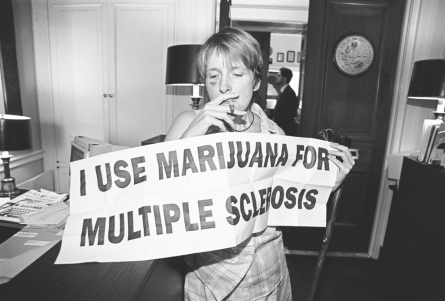 T
What's Next For Cannabis In Congress?

Jun 7, 2014
The General
T
T
Could This Be The Year for A House Reversal On Medical Marijuana?