Wanted to make my first post here something to at least be interesting to look at. so I'm going to post pics and info of what is currently 9 weeks flowering so far Rocklock and Grape romulan grow. I have a smallish tent that was purchased from Amazon, 3 feet wide, 21 inches deep and 5 feet tall. Normally this tent is used for both growth phase and flowering, but I recently made a clone/veg cabinet.

I used 3 gallon pots for the plants, got the nice rooted clones from a local dispensary and chucked them in miracle grow organic choice.... ya i know, but it was on sale, and was better then the chemical fert dirt that was my only other option at the time. I recently picked up some kellogs organic fertless soil for my next grow, but that's just me rambling now.

Well on to the show, the first pics are of the just dropped in dirt rooted clones 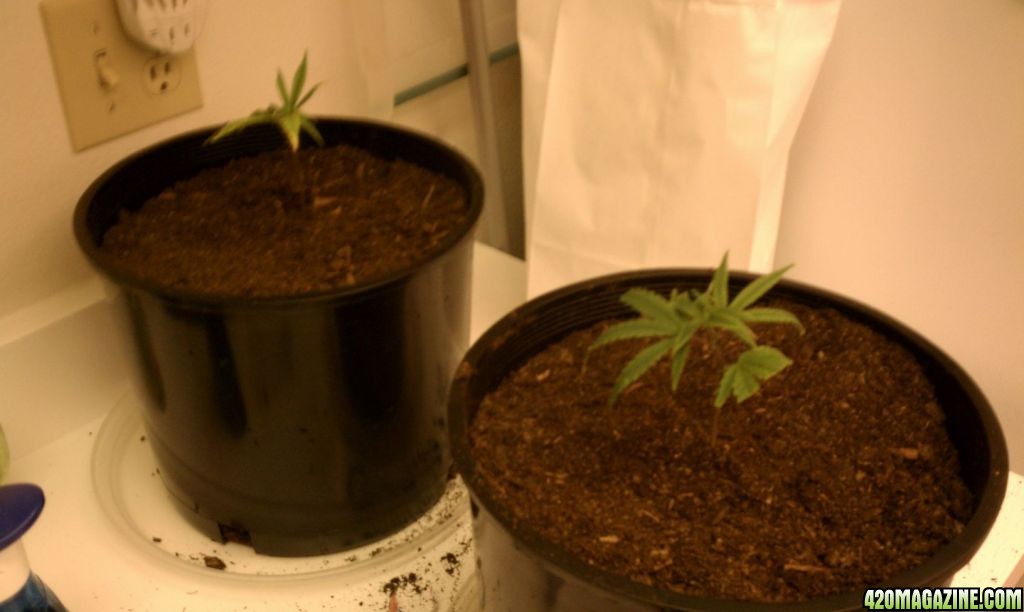 and in the tent: 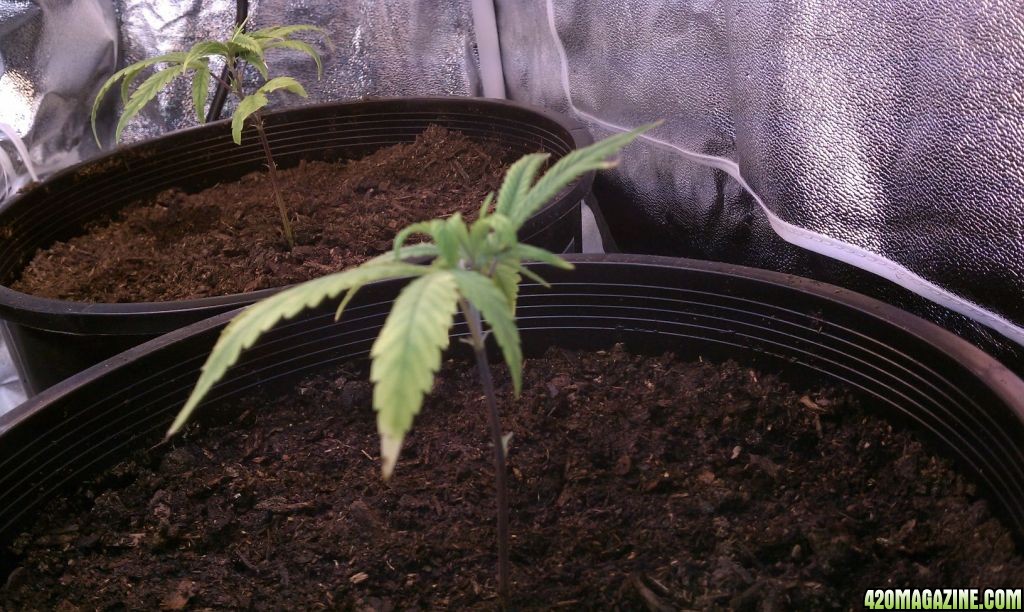 The same plants, about a week in The bushy Rocklock on the right, the grape romulan on the left, I didnt think the Grape would do well, but it proved me wrong eventually: 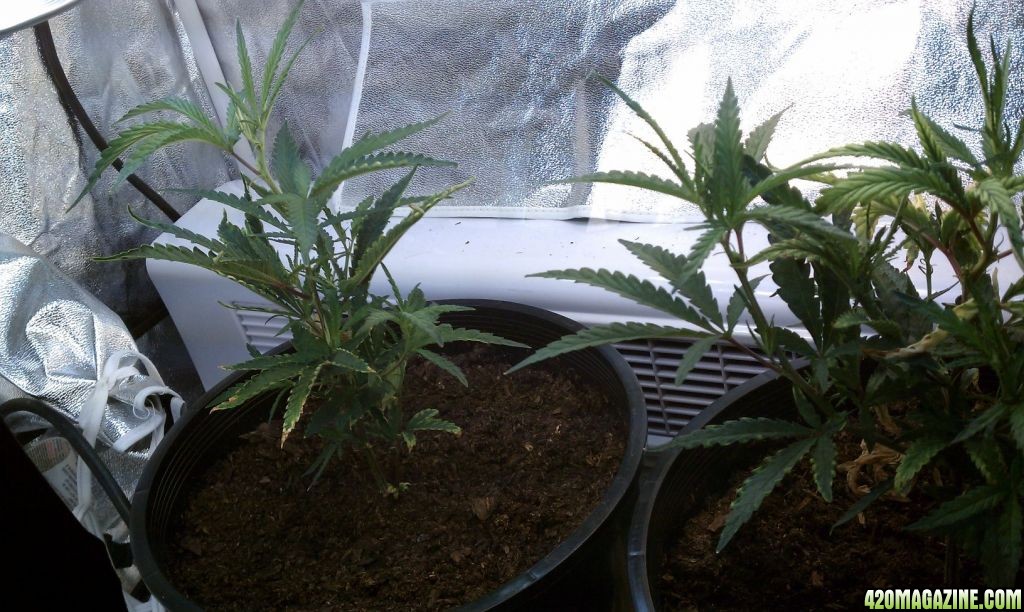 Another week about and some more growth: 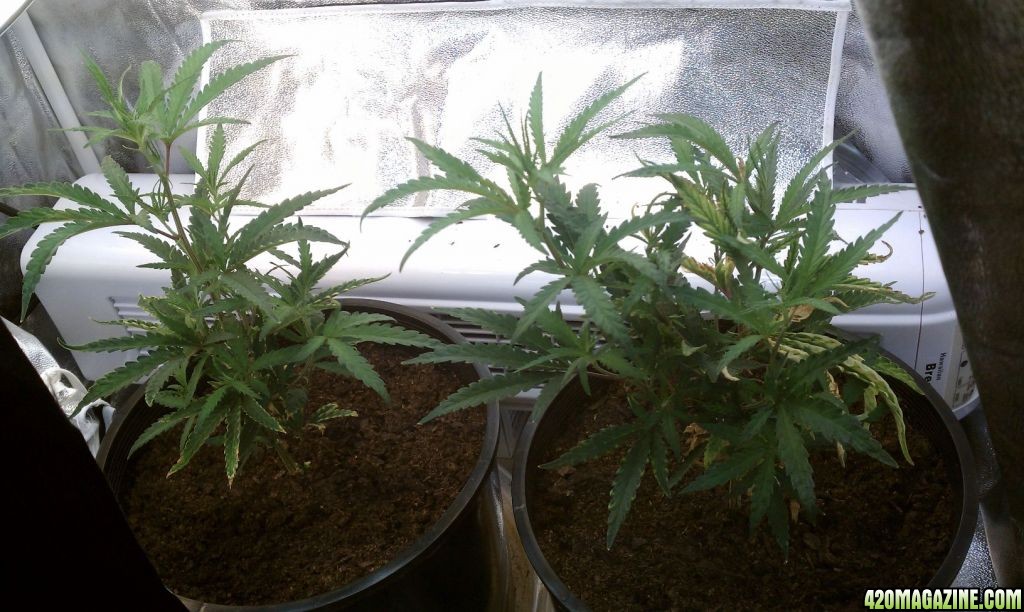 Both plants finally looking good, this was about 3-4 weeks of vegging, i was not using nutes at this time, mainly because i was broke 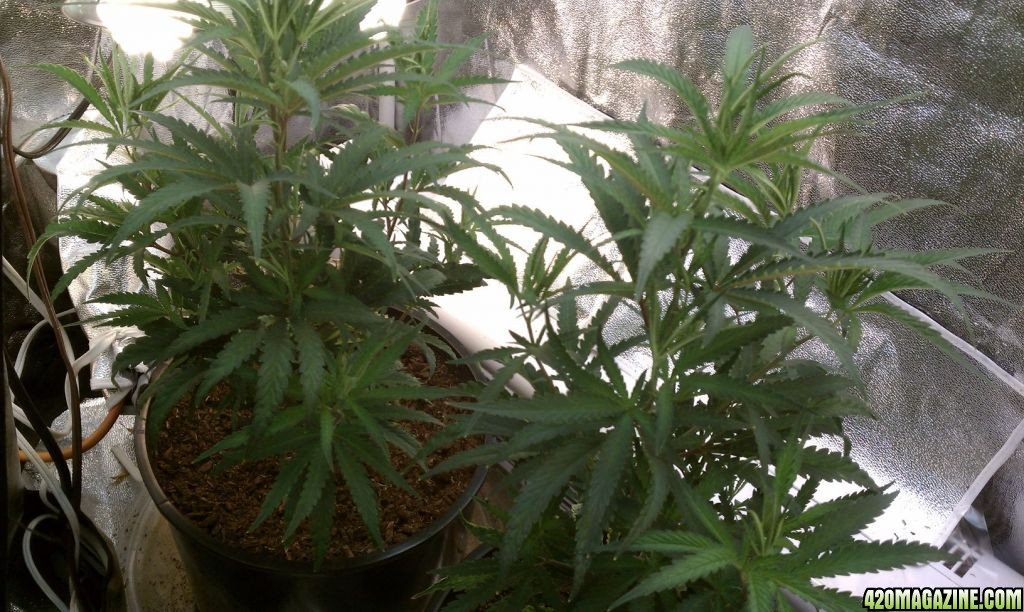 Here is the plants after a few days of stretching, then switching to 12/12 nothing showing yet, but they're alive 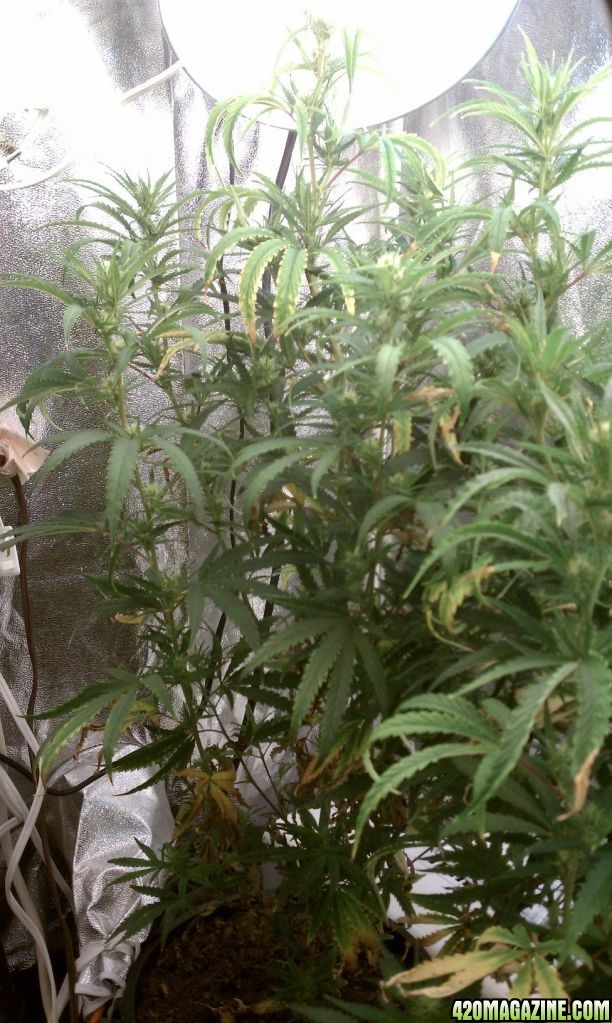 Oh bud growth, first bits after about a week and a half of 12/12 that: 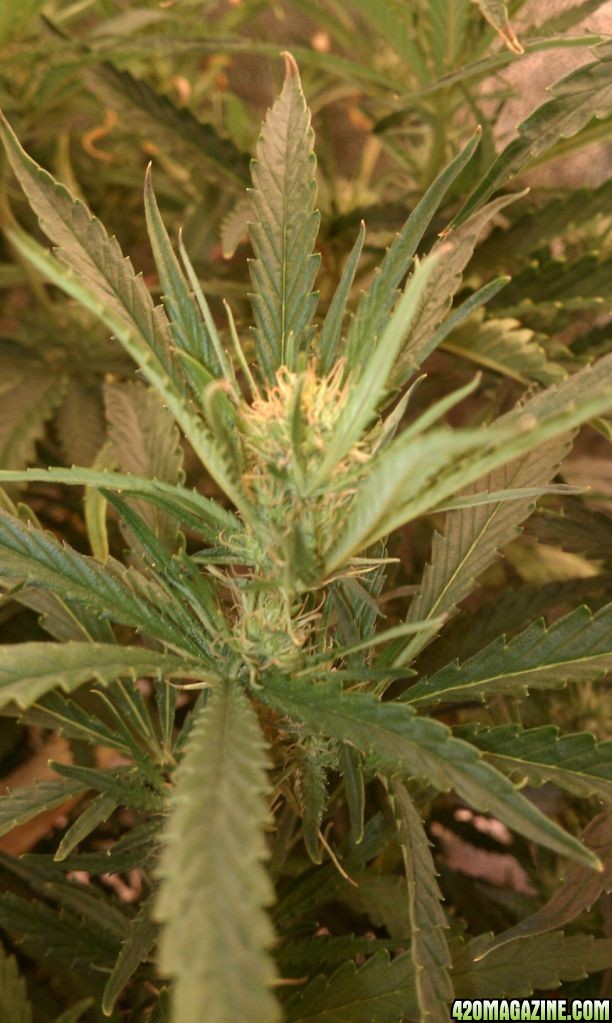 I unfortunately neglected my pictures for a bit, here is about 5 weeks in we have lots of buds, but nothing too special looking 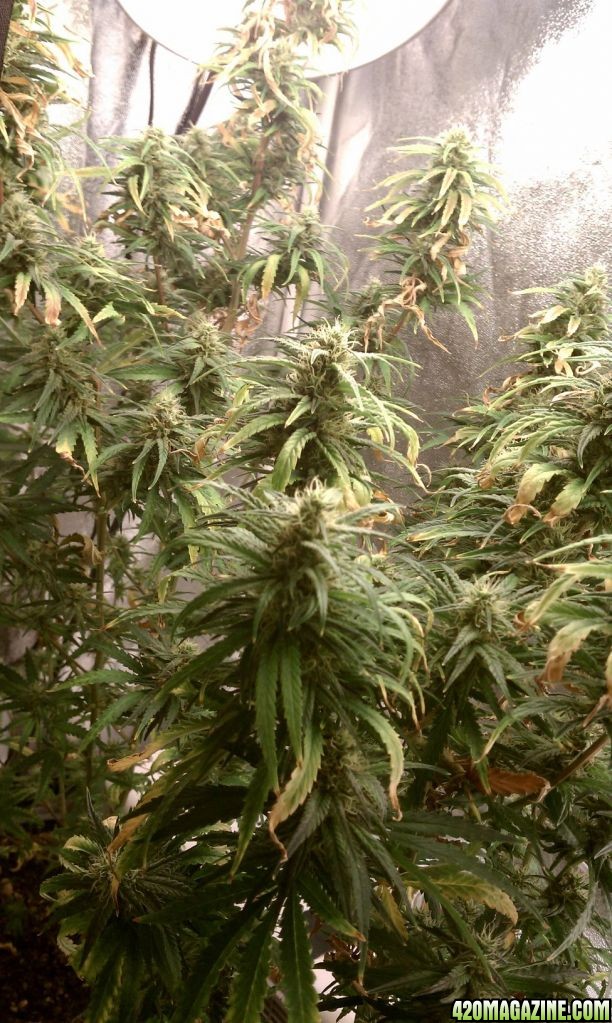 I got bored and wanted to see what kinda nutes I could get locally so I decided to drop by a couple hydro shops by my house and found a good one, ended up getting a deal on a General Organics Go Box, which is basically a full setup of all the nutes you need for the full life cycle of the plant. I'm also using Pro-tek and got a free sample of MOAB (mother of all blooms) that should last me the next few grows. So I decided to start pumping nutes into the plant in what i thought would be their last two weeks, here is my usual feeding mix, its 1/4-2 tbsp of each 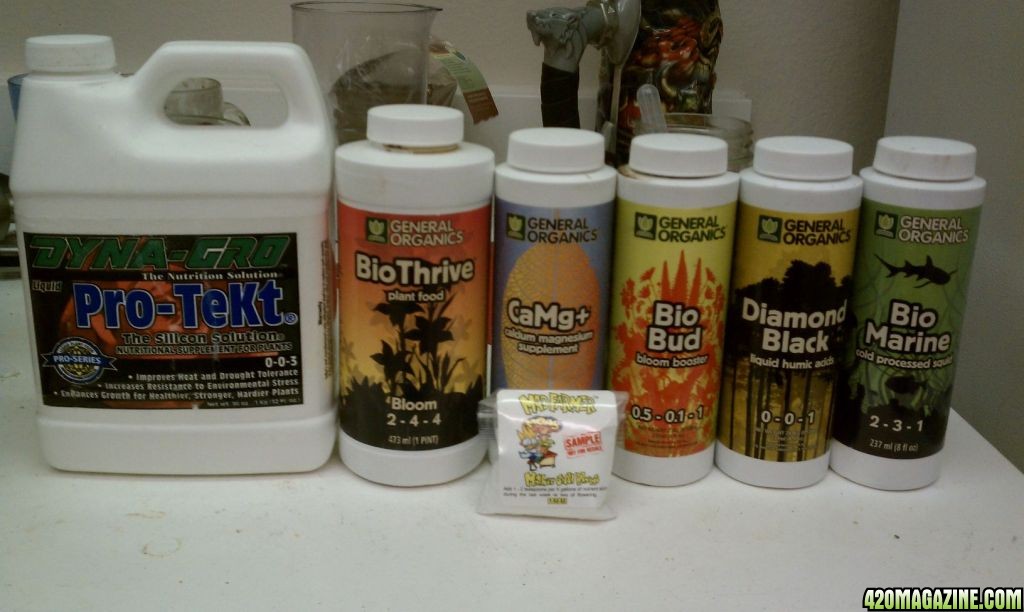 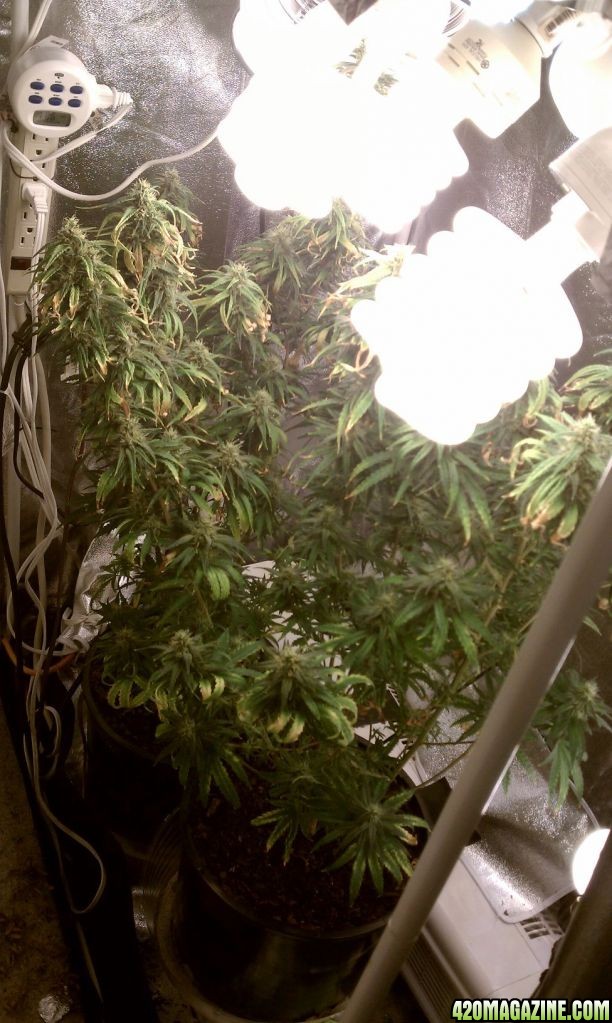 Aaaand the plants as of today: 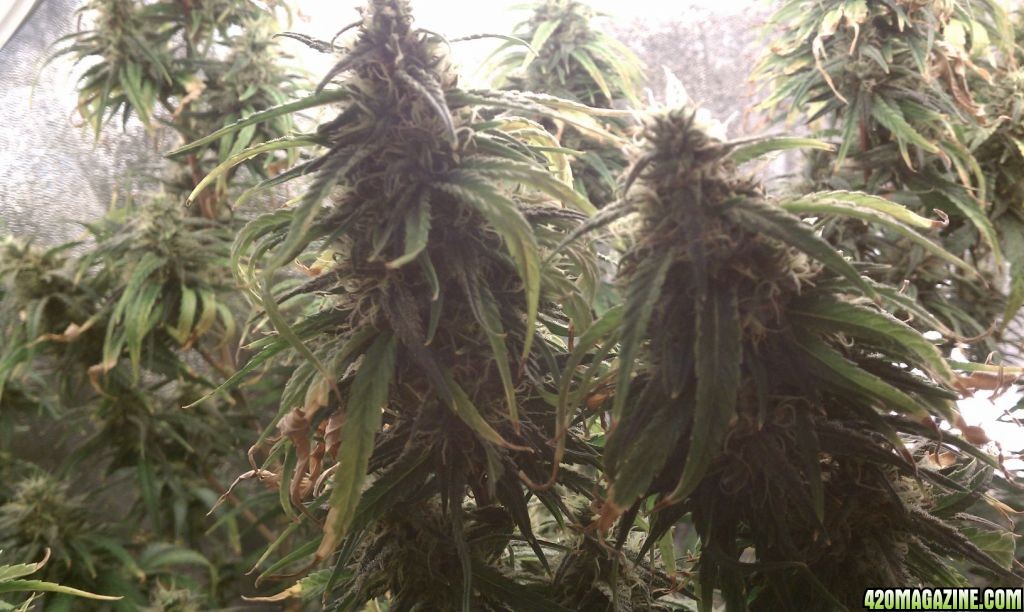 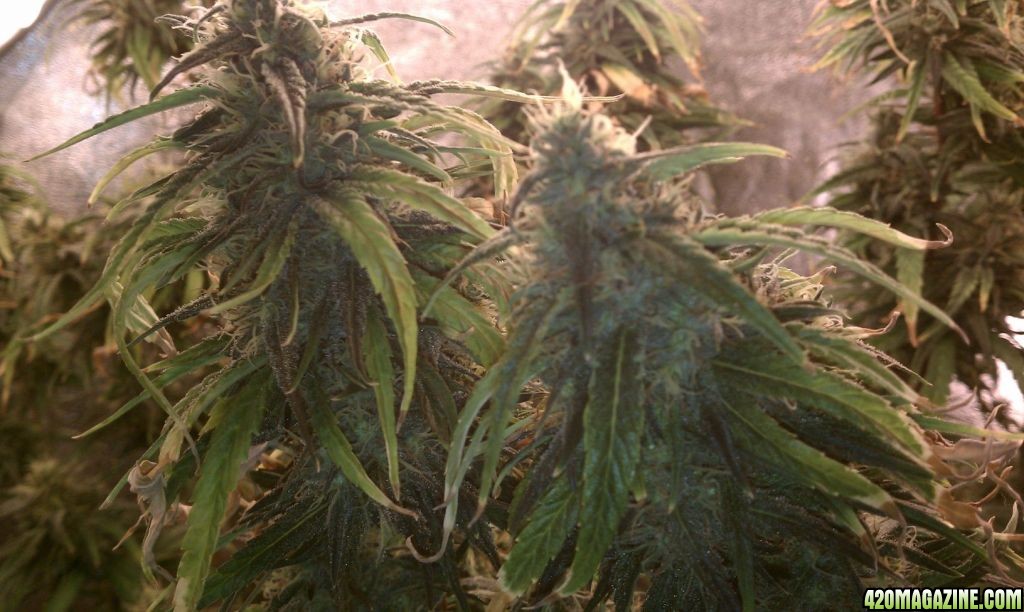 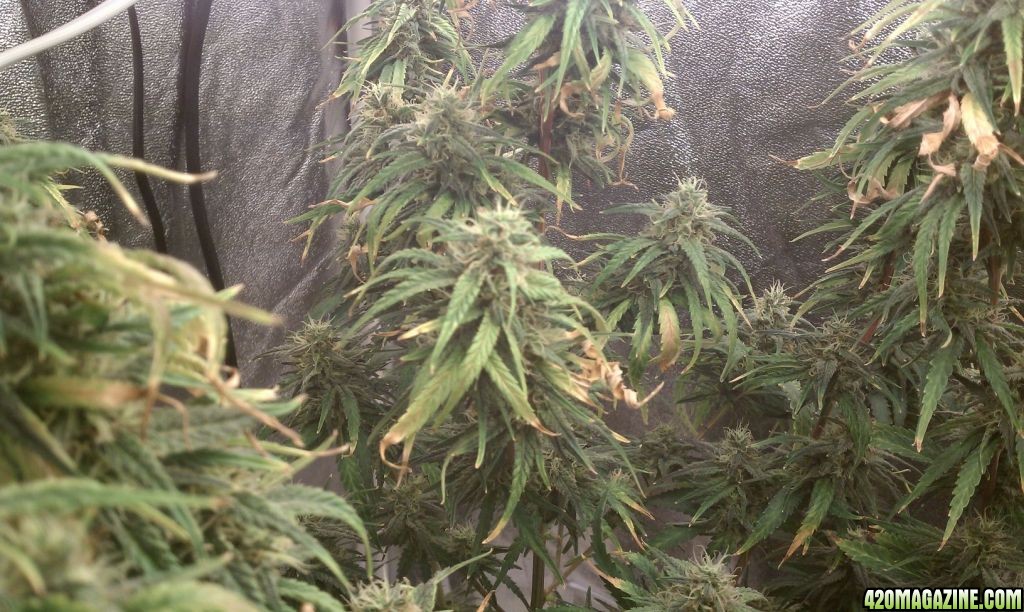 And some close up shots using my phones camera (all pics were taking with my phone) and 10x jewelers loupe for some close ups. 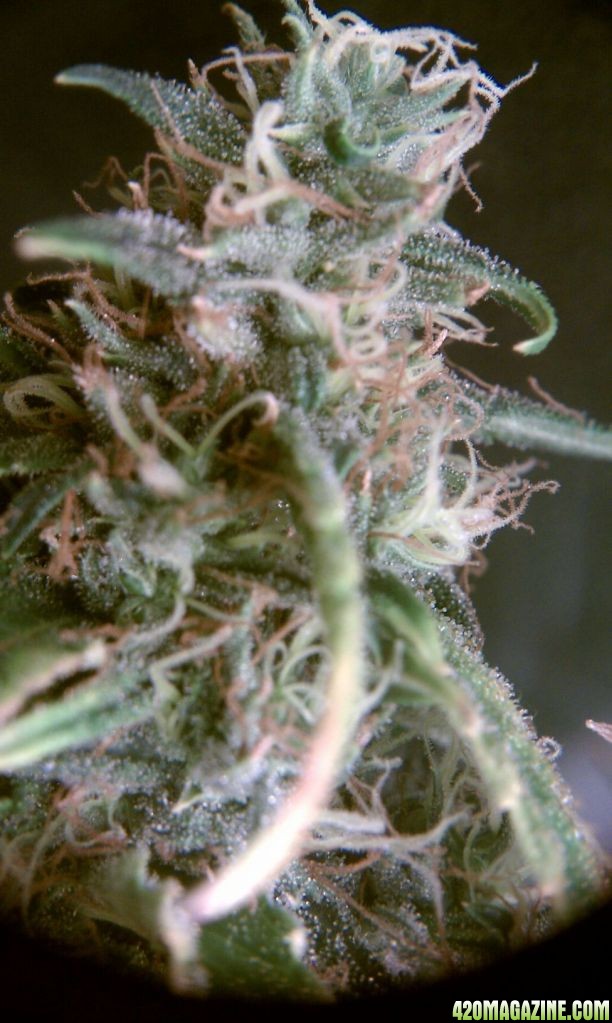 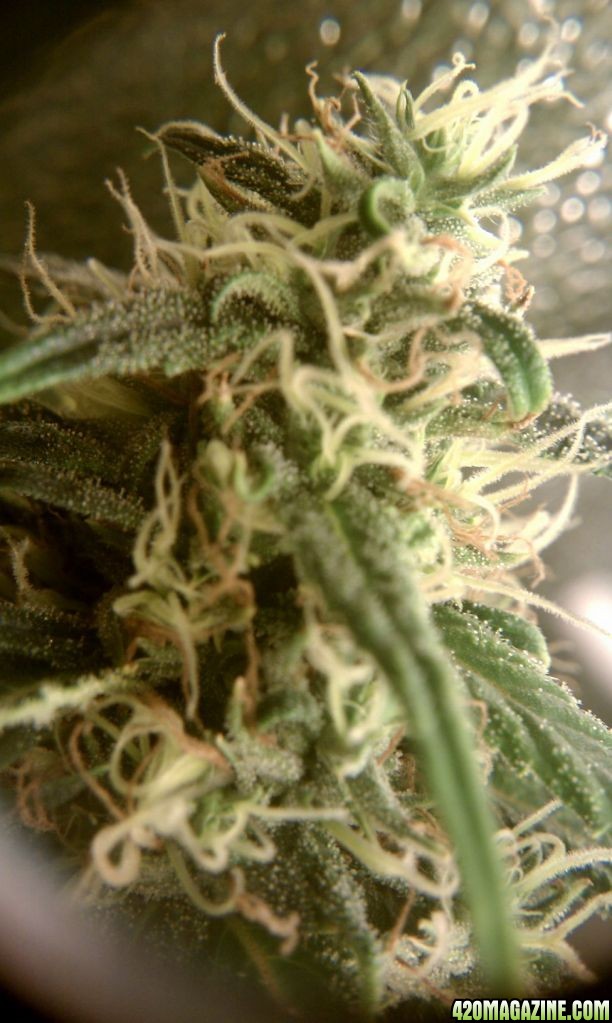 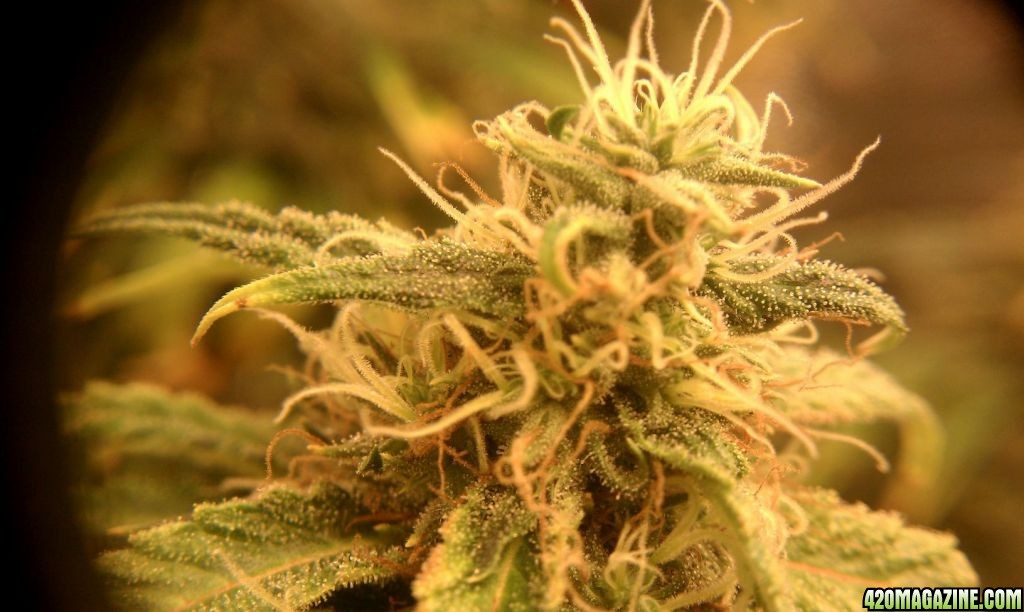 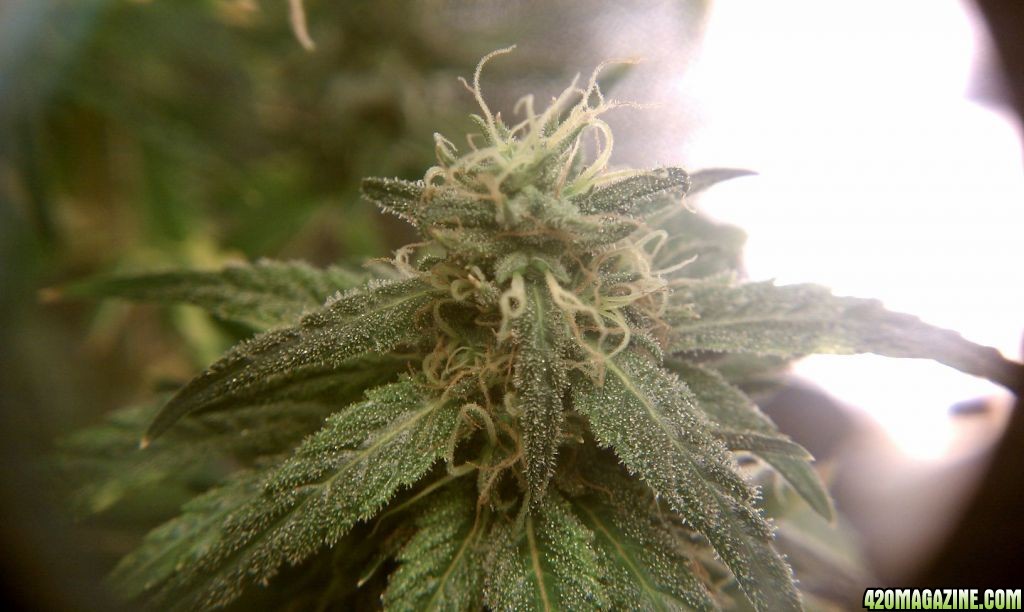 I Plan to chop the bigger buds on the Grape Romulan in the next day or so since its looking to be about time, the rocklock just still is mostly clear trics so I dunno, but I will post the changes as well as the chopping drying and all the like, if i remember to take pictures that is

If anyone has any questions regarding any specifics, I can give info, I wasn't completely accurate in times and a little short with info i'm sure, since i uploaded all the pics at once and i'm trying to do this stuff from the last 12 weeks of memory and we all know how hard that can be

Well I will be cutting the top buds of the grape romulan plant tomorrow morning, and letting the smaller buds mature a bit more and the Rocklock looks likes its still gonna be going another week still.....

it seems to be taking forever according to the trichs, and the hairs are still fairly fresh so i guess it really does need the time, no need to pull a bud before its time.

So I cut the top ripe buds off of both of my plants today and left the lower buds to go for another week. so the first pics are the first plant I cut down, the Grape Romulan: 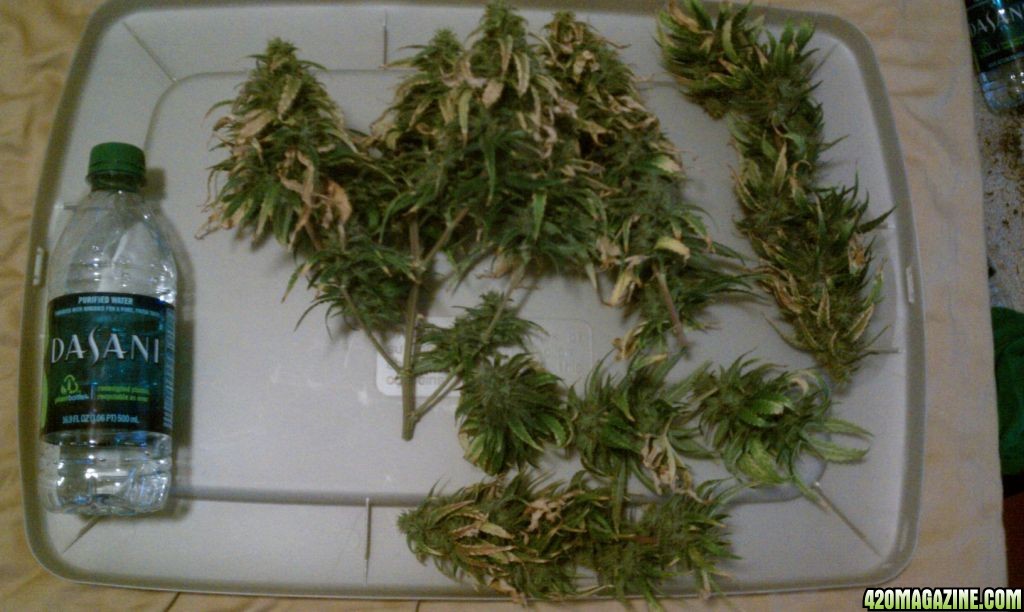 That's what I ended up cutting off, which leaves about half the plant and a quarter of the buds

The GROM buds trimmed up a bit: 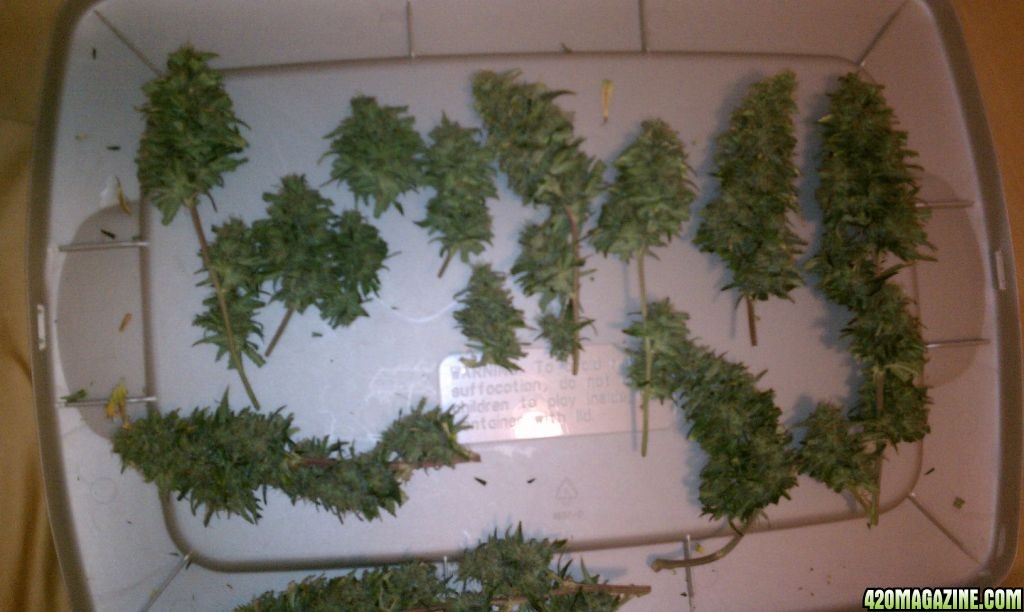 and the obligatory size comparison on the biggest GROM bud: 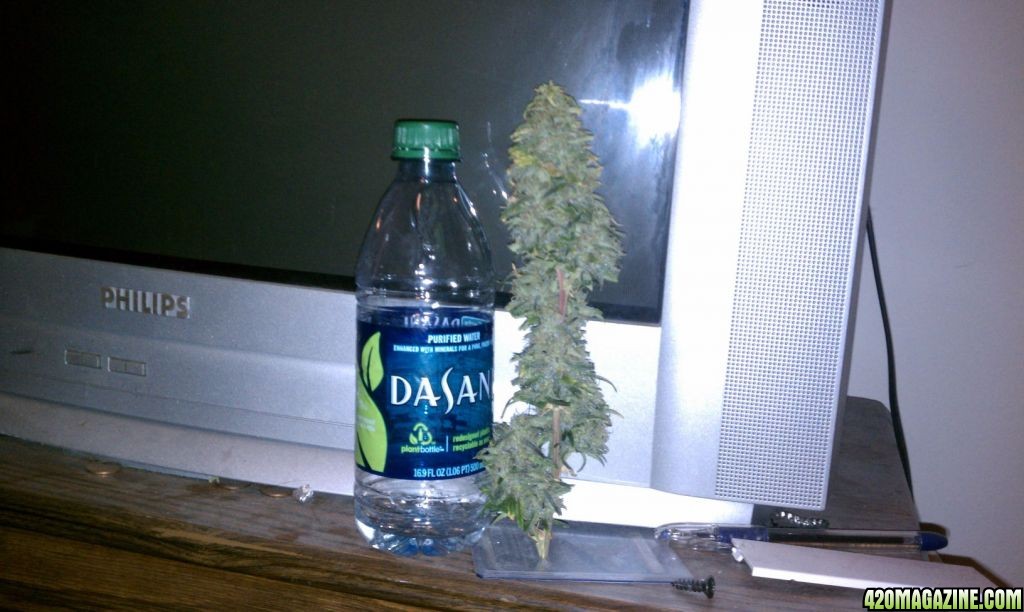 Then I debated for a bit, stared at the rocklock for a bit longer then decided to chop the top of it, I have been debating for 2 days now whether to just chop the one, or both. But I think, I made the right choice.


The tops of the rocklock: 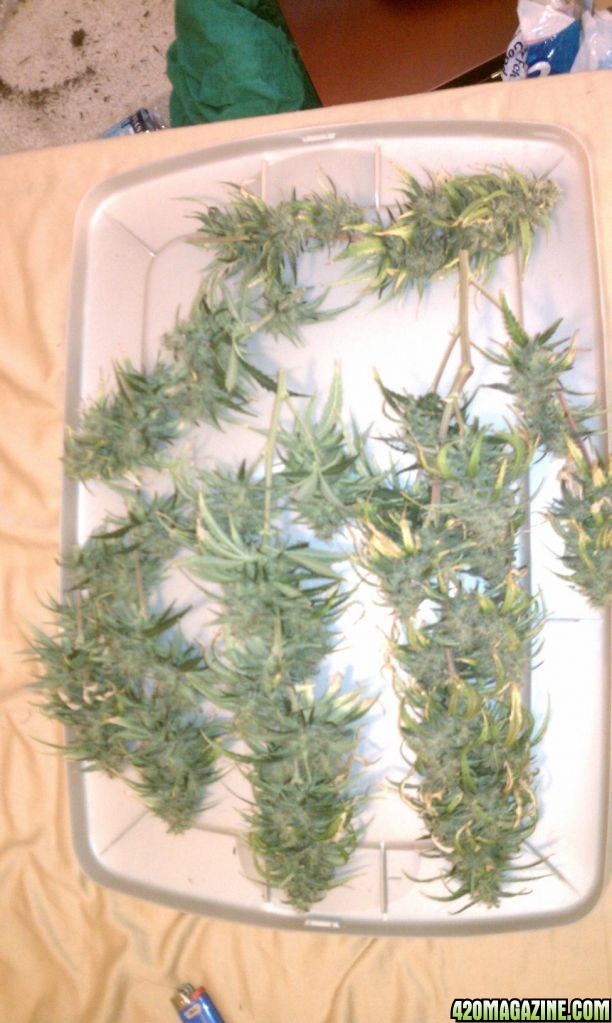 unfortunately I wasn't thinking and didn't take pics of the Rocklock trimmed till all of the buds from both plants were hanging. But you can at least compare a bit in the next pics, The grape rom is on the right and the rocklock starts at the big bud about the middle to the left. 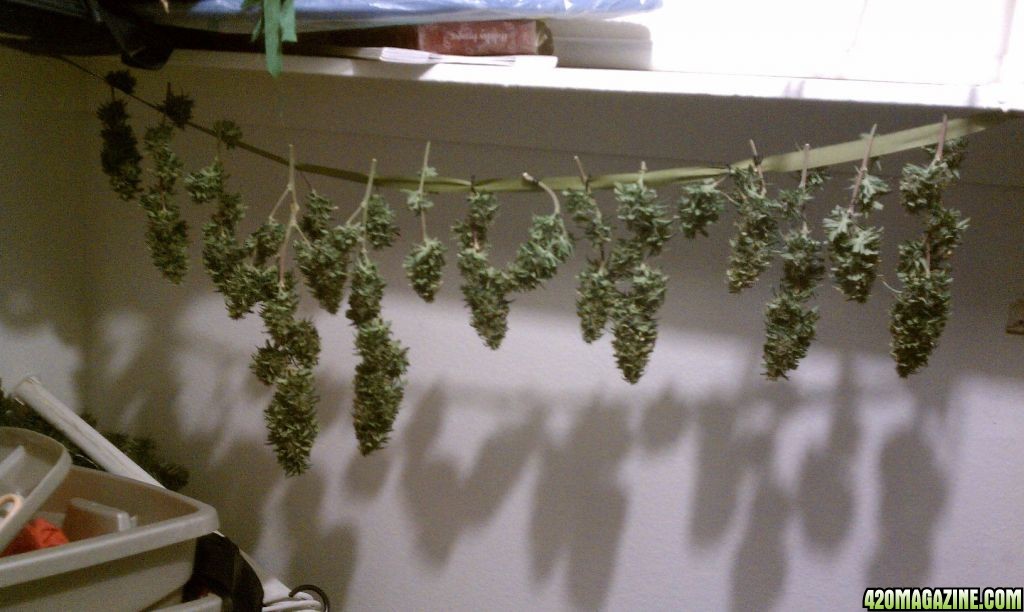 and with the flash 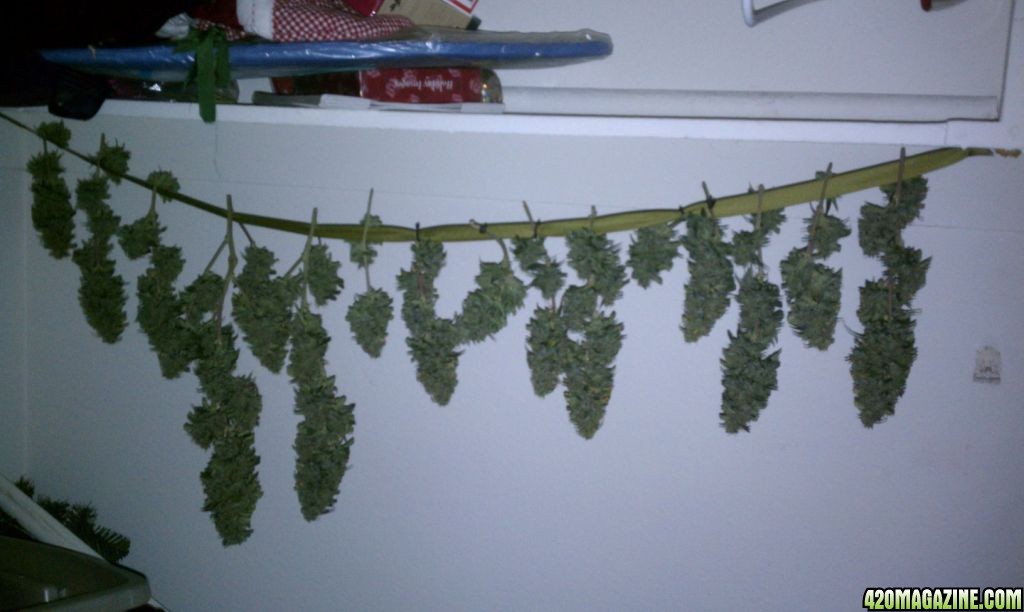 and now we have what is left of the plants: 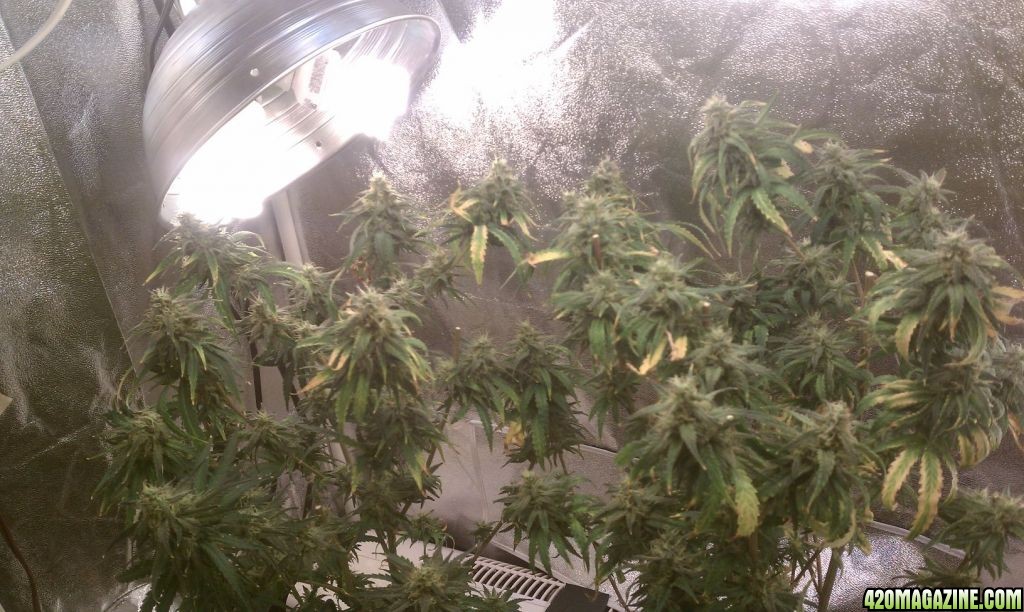 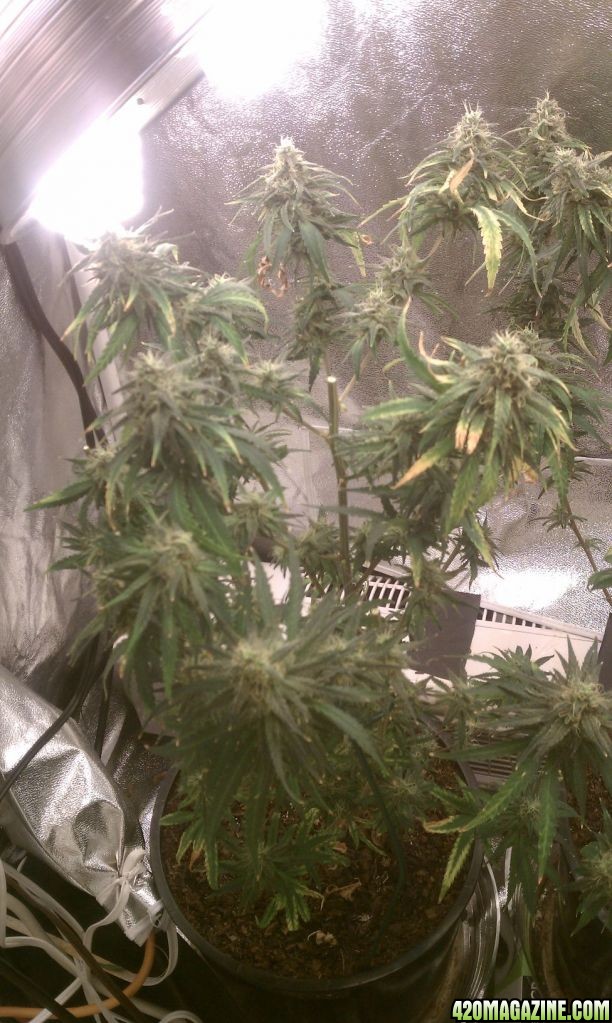 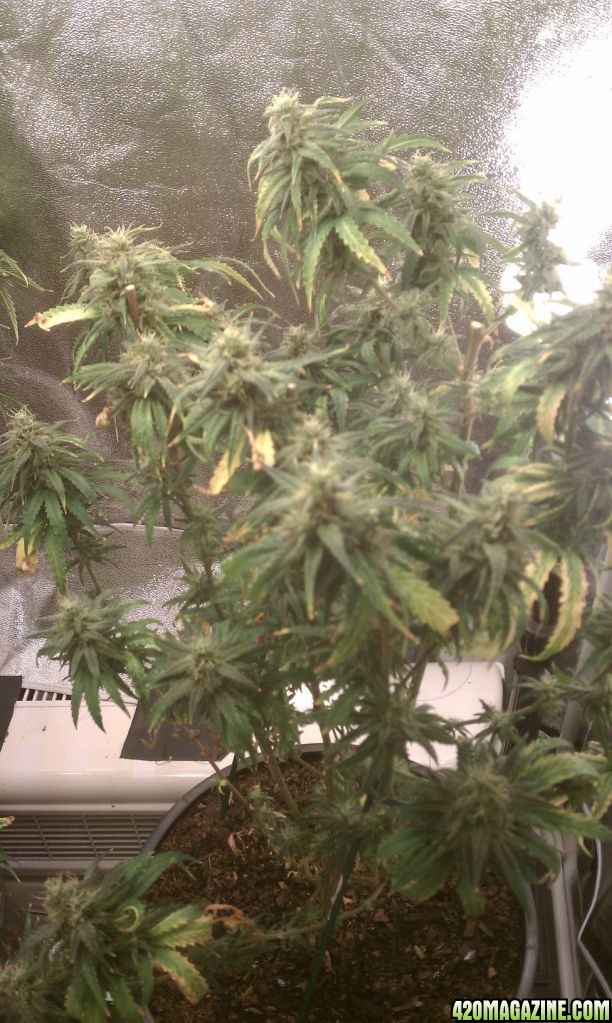 Now we wait for it to dry

Hoping for 3-4 ounces from this stuff and another ounce+ from whats left over dried. Thats hoping

Got everything dried up, final count Grape rom, 2.3 ounces, Rocklock, 3.5 ounces. Grape romulan smells and tastes a bit fruity/piney with a light indica feel. The rocklock has more of a cheese smell, with a more lockdown indica kick, both turned out amazing for me and just glad my second grow was successful. I may post some pics of the final product, but haven't been taking as many pictures, been more smoking

Use coupon code "420MAGAZINE" for 10% OFF all of our products.
Helping Professional Growers Succeed - Blue Planet Nutrients
blueplanetnutrients@gmail.com
W

Appreciate you looking through my grow, it was a little scattered due to not posting anything till I was ready to harvest


Random addition to my grow tent today, I got bored and built myself a new light setup for my CFLs. I'll Probably add a couple more of the big 300 watt replacements (I think they're like really 70 watts or so, from HD) and move some things around, possibly make reflectors for the middle 2 bulbs. I made it with a couple 1x2's, you can see the one with the lights attached, there are 2 on the back, with screws through, both chunks of wood and the aluminium and then the screws you can kinda see on the outer edges are screwed into the wood to make the thing not snap shut

Oh and I of course moved all the wires out of the way. 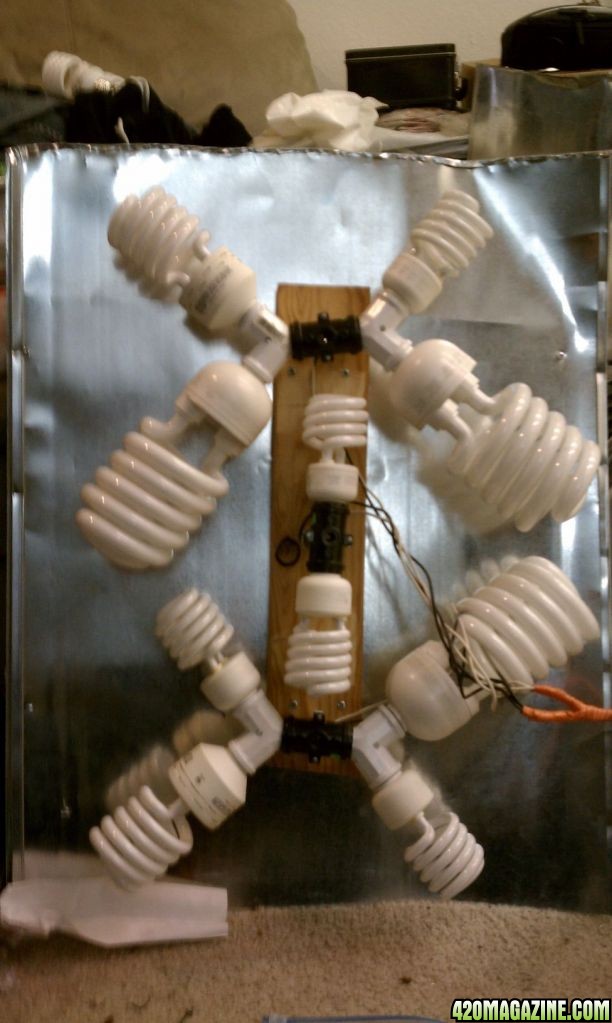 that full piece fits pretty much perfectly in my tent, no light escapes up, (well barely, gotta have some space to vent up a bit) now i just need an adjustable holder for my lights, Harbor Freight here i come.

We'll see if the new lights help in the next grow, which I will be journaling better i hope

AAnd this grow is fully done. My new grow will start shortly. Taking off the soil gloves and trying on the hydro ones

My next grow already slightly in progress can be found here:

420 Staff
Thanks for sharing your grow with us!

Don't forget to head over to the 420 Strain Reviews forum and post your smoke report there too!

If so, please start one here:
Journals in Progress