When It Comes To Marijuana, I Plead The 'Fifth' — Rocky Dawuni

For someone who believes and practices the ideologies of Rastafarianism, it is usually not far-fetched for that person to smoke its symbolic herb, marijuana.

While many will not hesitate to associate themselves with the herbs, Ghanaian and International reggae artiste, Rocky Dawuni was caught at a very tight corner on that issue during an interview on Personality Profile on Drive Time on Joy 99.7 FM Thursday.

When a listener requested host, Kwabena Anokye Adisi popularly known as Bola Ray to quizzed Rocky if he also uses the herbs, Rocky was quick to say, "That's personal you know, I think everybody has the freedom to do what he does."

Just when he thought he was off the hook, Bola Ray quickly hit him with a much firmer question: "Do you smoke Marijuana?" Rocky noticing he was in a tight corner, had to fight the world before coming out to say, "That's a pointed question and I will say I plead the fifth," sending the whole studio agog with laughter. This was a clear indication that this super star was running away from his own shadow.

As per the Fifth amendment in the United States Constitution, if one says I plead the fifth, it means that person has decided or chosen not to comment on that particular issue — an escape clause for many who are put on the spot.

Is Rocky hiding something? — Does he smoke the herb or not? He however swiftly admitted that he is a vegetarian when asked if he was one. "Yes I am a vegetarian, no meat, no fish, no eggs. I believe in really keeping the tempo clean...everybody is free to do what they want to do," he emphasised.

Born in Ghana to a military family, Dawuni grew up in a political atmosphere and was deeply influenced by tribal, soul and reggae music as a means for change. Tagged as Ghana and possibly Africa's Bob Marley, Rocky burst on to the African reggae scene in 1996 with the release of his debut recording, The Movement which had great hits such as Sugar and What Goes Around.

That album shot him into instant fame receiving great reviews both locally and internationally including a review in the New Nation, one of England's most influential weeklies, where Rocky was touted as Ghana's Bob Marley.

Rocky also has Crusade, Awakening, Book of Changes and his current, Hymns of the Rebel Souls to his credit. Hymns of the Rabel Soul released in May 2010, has received several international awards and nominations including NAACP Image Award for Outstanding World Music Album. Songs on the album was also featured on EA Sports' FIFA World Cup and FIFA Soccer 2010 video games which have sold millions worldwide.

He recently trilled hundreds of fans at the Tamale Sports stadium at the 2011 Independence Splash and also in Kenya at the Songambele 2011. Rocky Dawuni has been slated to perform at the Hollywood Bowl with Stevie Wonder and Tonight Show's Rickey Minor at the KCRW World Festival on July 24. 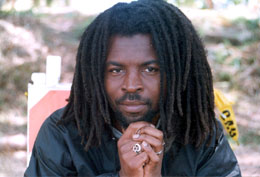 NewsHawk: Jim Behr: 420 MAGAZINE
Source: ghanaweb.com
Copyright: 2011 GhanaWeb
Contact: Give Your Feedback about GhanaWeb
Website: When It Comes To Marijuana, I Plead The Fifth
420 Magazine - Your Best Choice For Cannabis News

Somebody asks you, a foreign national visiting the States, during a radio interview, if you regularly break the law, and you are supposed to say what exactly?

I won't plea the fifth, I will take a quarter though!
Forum Guidelines

T
EVANS MUM ON MARIJUANA USE