Dustin Johnson isn't your average drug dealer. Despite a rigorous religious upbringing and an early career in real estate, he found his true calling as president of Monarch Wellness Center, Scottsdale's only medical marijuana dispensary. Johnson grew up in Scottsdale, attended Scottsdale Christian Academy and received a degree from the Church of Christ-affiliated Pepperdine University in Malibu, California. He grew into the marijuana business to help people like his mother, who spent 10 years relying increasingly on narcotic pain medication for nerve damage before switching to pot after voters passed the 2010 Arizona Medical Marijuana Act.

"She was driving to South Phoenix to some of these collective operations that weren't legitimate, and I realized there was a need for people like her for a facility in her neighborhood," Johnson said. He is part of a growing class of budding entrepreneurs who hold the 98 dispensary registration certificates currently in the state. For Johnson and his peers, navigating the path between criminal and caregiver is challenging, despite the ultimate reward he sees in easing people's suffering.

The medical marijuana industry is on a growth track. Arizona's first dispensary opened about two years ago in Glendale. It reaped a windfall as all patients within a 25-mile radius had their personal plant-growing rights revoked, which essentially forced them to go to the dispensary if they wanted to continue using the drug. As other shops have opened, the industry has experienced a boom, hiring everyone from growers to retail workers.

In a study published in March 2013, Ari- zona State University Professor Timothy Hogan estimated dispensaries will support 1,500 full-time jobs and pay out $74 million a year in wages once the industry reaches maturity in 2016. After including ancillary businesses and spending as a result of direct wages, those numbers shoot to 6,500 jobs for Arizona workers, $315 million in income payments and $990 million in overall eco- nomic activity.

Finding the right workers
For dispensaries, winning a ticket to open is only the first step. Jon Pilkington, co-founder of TruMed Dispensary near 40th Street and McDowell Road in Phoenix, said leasing space to operate is harder. TruMed, which is licensed to operate in the Camelback East community health area, almost couldn't find a retail location. "For starting the industry in Arizona, it was very hard to find landlords that were open to either retail or cultivation," Pilkington said. "We'd call them and tell them the use and they'd say 'sorry,' even if their build- ing is vacant sitting there for 18 months."

Once TruMed found a place, it was time to hire staff. The company has about 12 employees at the retail location, which opened in August 2013, and 10 more at its cultivation site in west Phoenix, which opened in October. Finding employees is a struggle. Each worker needs a dispensary agent card from the Arizona Department of Health Services, which sets back business owners $500 per employee each year. While no employer wants a convicted felon on the payroll, finding staffers who are knowledgeable about growing cannabis is wading into criminal territory.

"We don't want to bring on people that have a criminal past," said Johnson, who oversees about 50 employees at Monarch's retail and cultivation site. "But moving for-ward, I think there's a dichotomy that's been created in this industry where you're either a patient or a criminal, and both people are using the same product." Dispensary agents make more than minimum wage, both Johnson and Pilkington said, though they declined to disclose exact pay. Most dispensaries operate seven days a week, with hours depending on individual cities' zoning codes. For cultivation sites, Pilkington said work is constant. "It's a garden," he said. "It doesn't take weekends off. Plants don't stop growing; they don't stop drinking. We really have to be on top of this."

Following a less nefarious path
For Lauren Goodman, a registered oncology nurse, the switch from placing IVs to recom- mending pot brownies was a little daunting. "I was kind of skeptical of this in the beginning, until I saw first-hand that it works," said Goodman, whose brother Mike Anton founded TruMed with Pilkington and who now serves as its president. "It works in my cancer patients, and that's how I got into this. I saw it, so I believed in it." Several other cultivation and dispensary employees declined to discuss their jobs on the record. While both TruMed and Monarch are less than a year old, both have plans for the future. Next summer, ADHS will accept applications for the state's last 28 dispensa- ry certificates.

Johnson said he's considering apply- ing for a second certificate, though he likes keeping his business close to home. He also said he's looking forward to finally mak- ing some money. Monarch still is in the red thanks to high costs from both state and fed- eral regulations, as well as high operating costs for electricity and water at the culti- vation facility. "I think for most startups, it's two or three years for a break-even, so we're get- ting there," he said. "We didn't want to just come in and make a quick buck; we want to be here for the next 20-25 years." 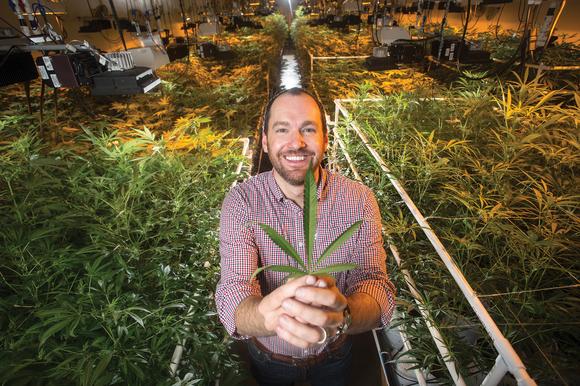