I ask this question because I felt a sort of omen come my way via word of mouth. A year or two ago I grew a plant for a friend. It grew fine, resinous and had the odor both sweet and stinky, but to smoke it was tragedy!!! There was nothing, as in no THC ! no high, no low. . nothin'!! now a week ago my brother came across a friend who he talked to about the plants and, the guy told my brother that when he tried to grow , they amounted to nothing as far as THC content. Once again another person who tried and once again no THC ! no high, no low. . nothin'!! this all seemed kind of "omenish" if you understand what I mean.

So I ask, what are the factors that could be involved in a plant ,of a viable strain and strong genetics not produce any quality results at all? I wanted to find out as many variables that could have an effect and negate them as best I can b4 another grow is attempted
:headbang: IF YOU BUILD IT, THE PLANTS WILL COME!! D.I.Y. SOLDIER TO THE DEATH!!!! :headbang:

What kind of strain were you using?
Im Legal To Smoke & Grow!

It may have been picked too early? By the way, potency is genetic.
B

^^ I think moose got it right. . . You could easily have a big beautiful plant, and harvest too early. . and get nothing. . . maybe your eyes would feel a little funny. . .but nothing more.. They key to knowing when to harvest is in the crystals. . . when you first see them their clear, and slowly turn cloudy, then to an amber color. 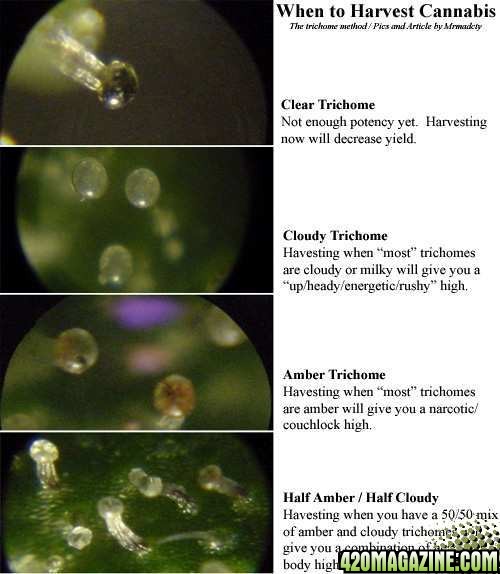 Those are great shots Bagz ..

In the Triches, Genes and It's Gota' be ripe
420 Magazine
Creating Cannabis Awareness Since 1993
How to Grow Cannabis
Please Visit Our Sponsors

It's mostly genetic, and can be down graded by growing technique, ripeness, and cure. So if you start with inferior genetics in the first place, the end product may be lacking. But based on your question of viable genetics, I'd also have to vote for "picked to early"...aka not ripe. They might smell great, but they still may not be ready to pick. But then again if they have flowers you should have gotten some sort of buzz.
Dedicated Contributor, former Grow Room Mod.
420 Magazine Creating Cannabis Awareness Since 1993.
GROW ROOM - HERE
HOW TO GROW MARIJUANA - HERE
GALLERY PIC UPLOAD GUIDE - HERE
Support the cause!

thats kinda what i was leaning towards in theory, as far as bad genetics, my first experience was growing for a friend, it was nothern lights, but upon some investigation she said it was a seed froma bagy and the seed itself was small and white, how she got it to germinate i never will know.

second time was with some bag seedbut the plants grew really wierd, like i mean no real internodal patern or anything. . honeslty the thing grew like iw as feeding it crack or soemthing and all i was feeeding with was water!!!! it was like that from seed!!!

but now i have some SSH beans i am dealing with, that were given to me from a friend. although he is a serious grower and gave them to me in good faith fromone of his grows, i am alwasy wondering , could thos epast thigns come back to haunt me, now that i have my shit together?!?!? who knows?

teh SSH are following teh growth pattern, even internodal space, really stron internodal sprouts, but GOD it would frakin kill me if they grew to nuttin' aswell.

R
If I were to extract the THC from Weed would it become stronger?
2

THC potency and how it's measured