This is my 4th official grow and 1st multi-plant grow. I lost A/C a few weeks ago and had to scramble to find a suitable location to finish flowering. Fortunately, I had a portable AC which helps immensely. No estimates on yield at this point but I'm thrilled with their progress to date. My GF isn't thrilled about the A/C situation lol

Any thoughts, comments, suggestions, tips are most welcome. 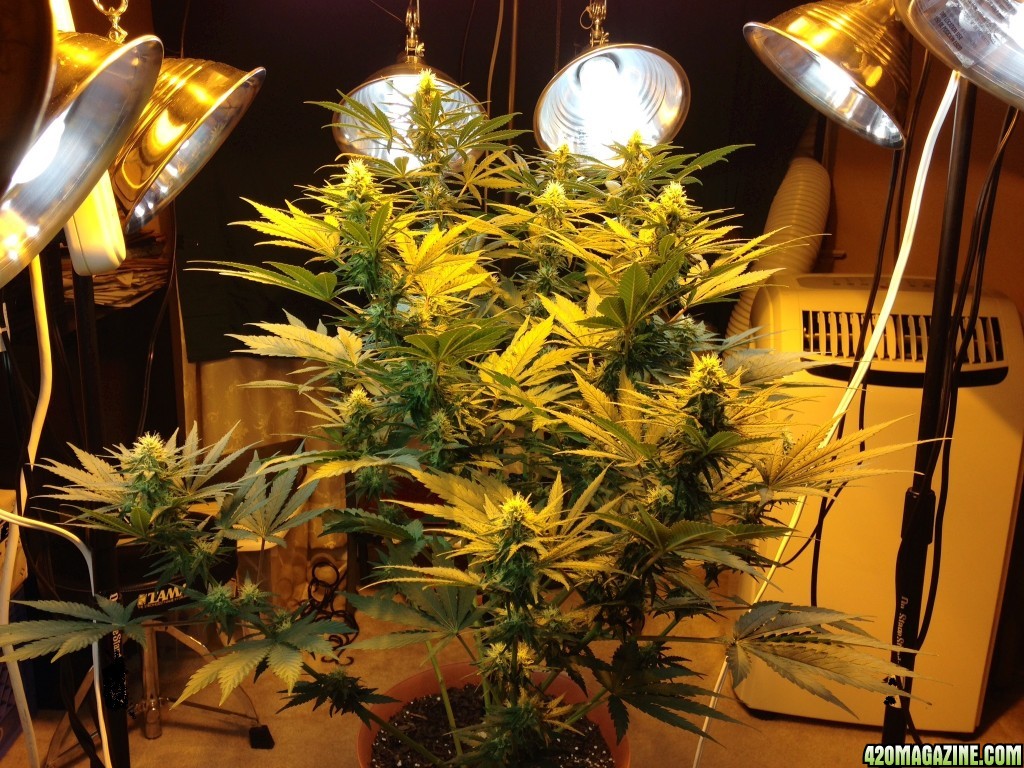 Here's a better shot of the girls 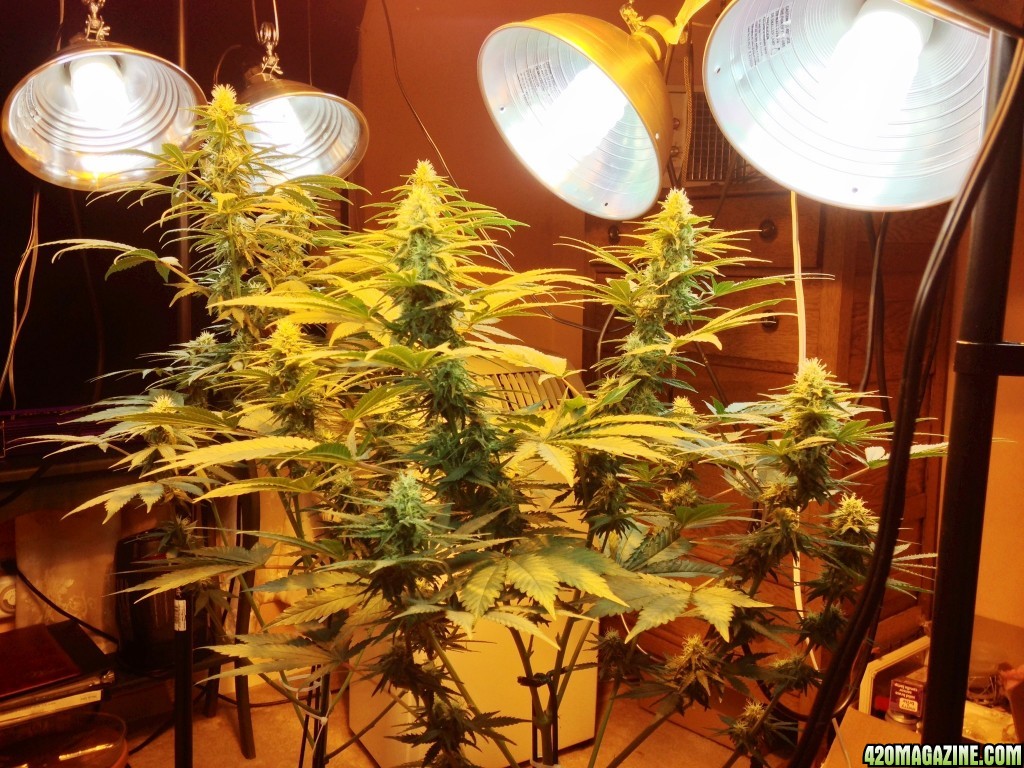 Day 34 after some minor defoliation: 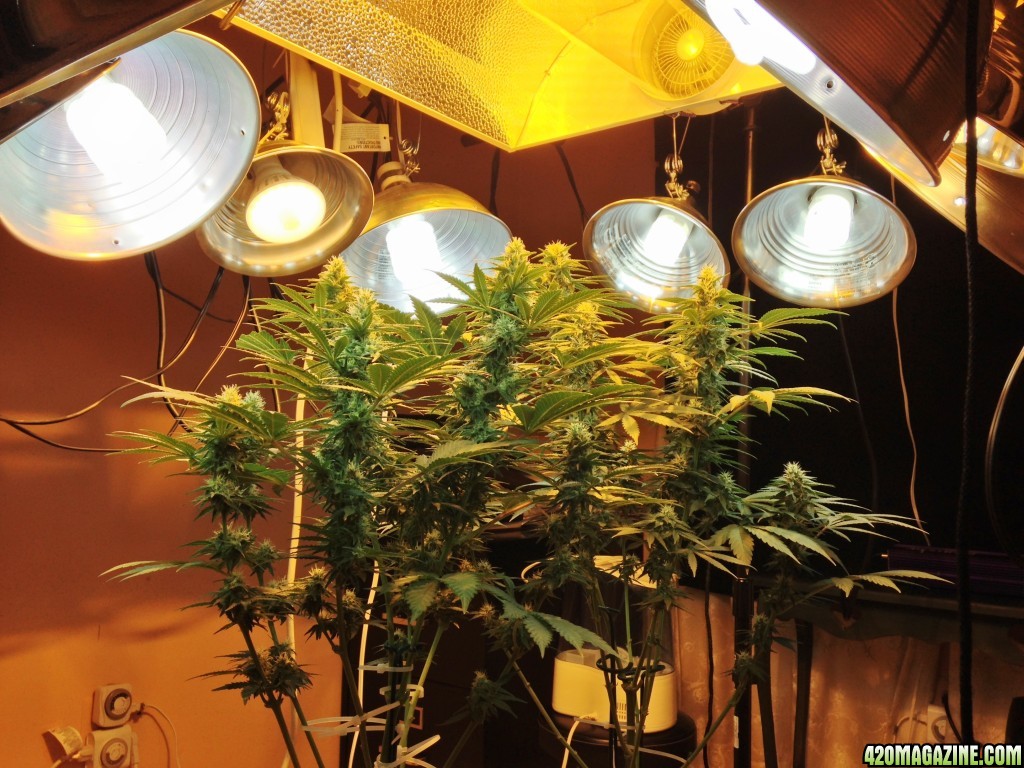 She looks healthy and vibrant! WW is a great strain! Your doing awesome, only thing to do is be patient now. Please keep updating! Would love to see how she flowers out. Happy Growing!

thanks for the positive feedback

i can't believe the difference using MH/HPS for the first time (400W). The COLAS appear much larger and denser at this stage of flowering. Even the little "popcorn" buds appear larger. I snipped one the larger COLAS some weeks ago to test the backbuilding method - and it's clearly working (tallest COLA on the right). Of course, I suspect maintaining CFL/LED sidelights contributed as well. 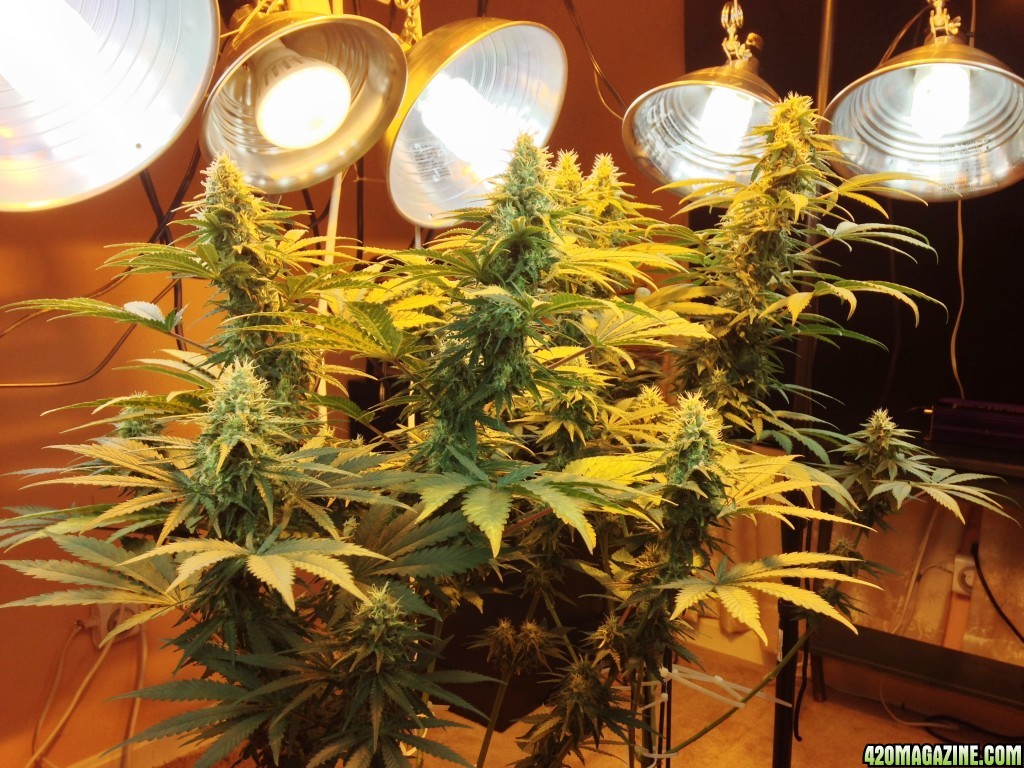 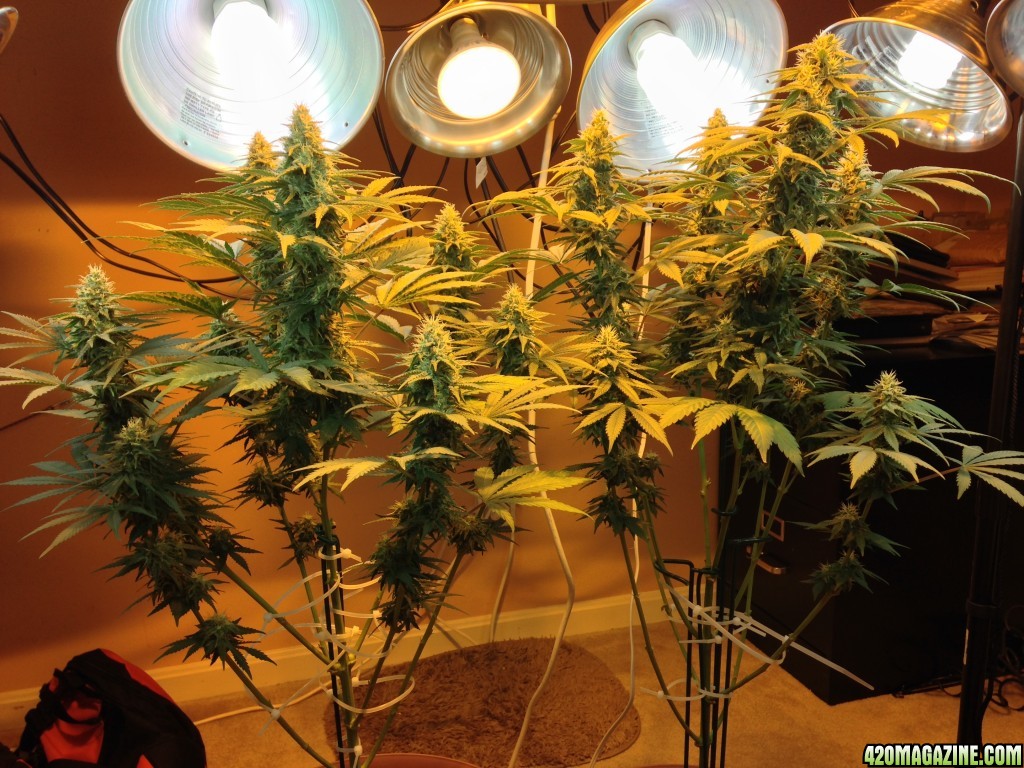 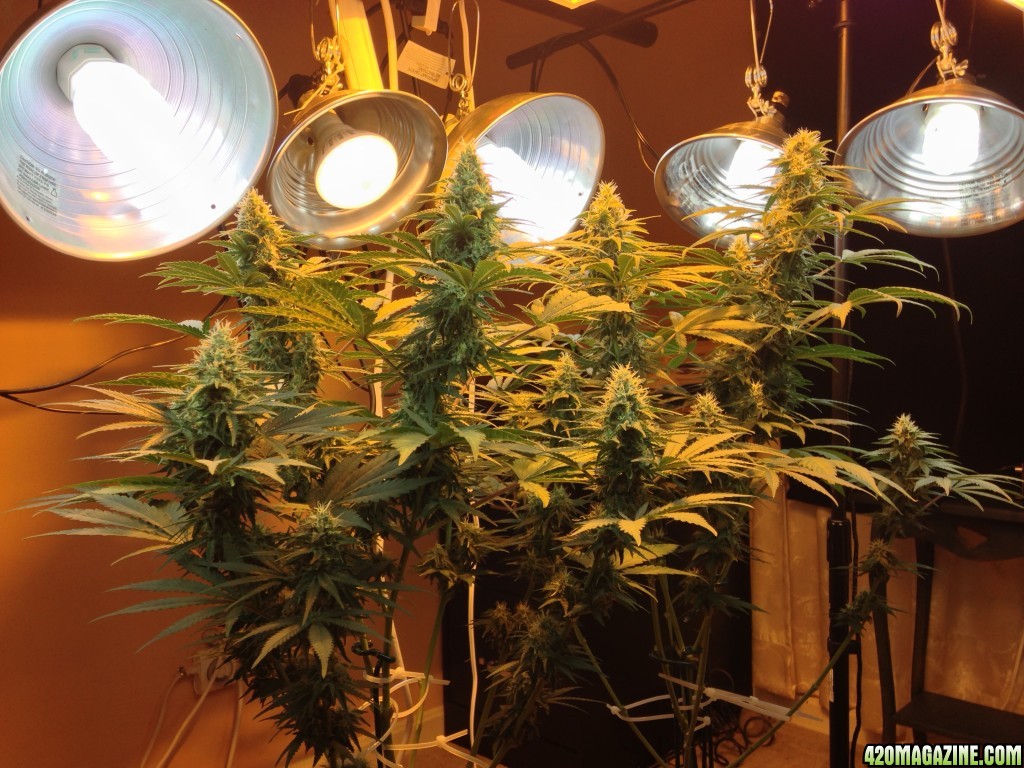 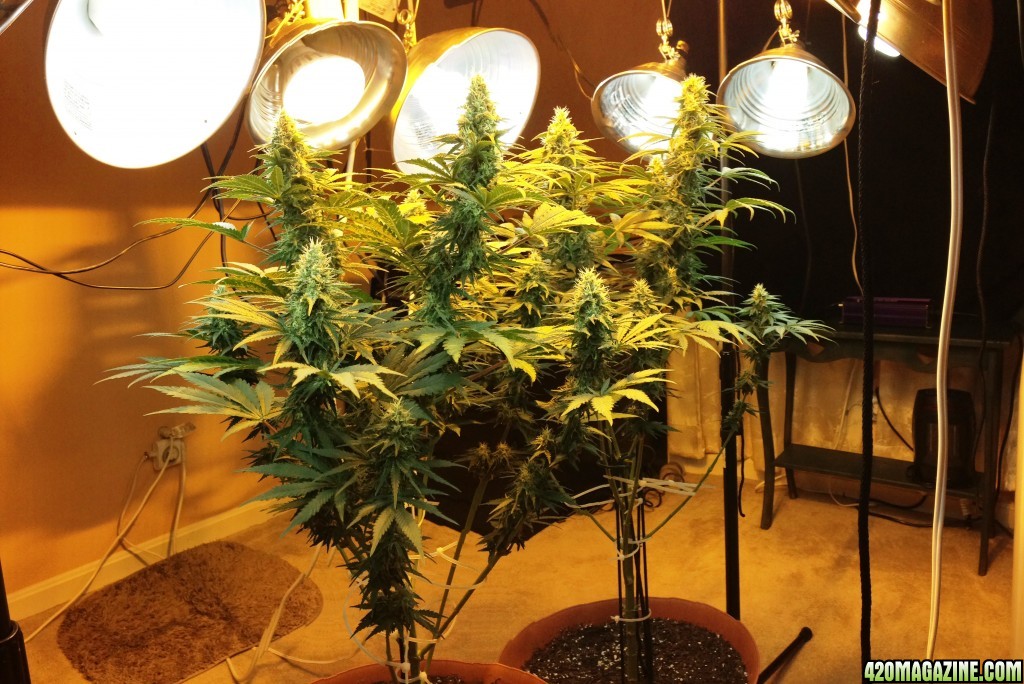 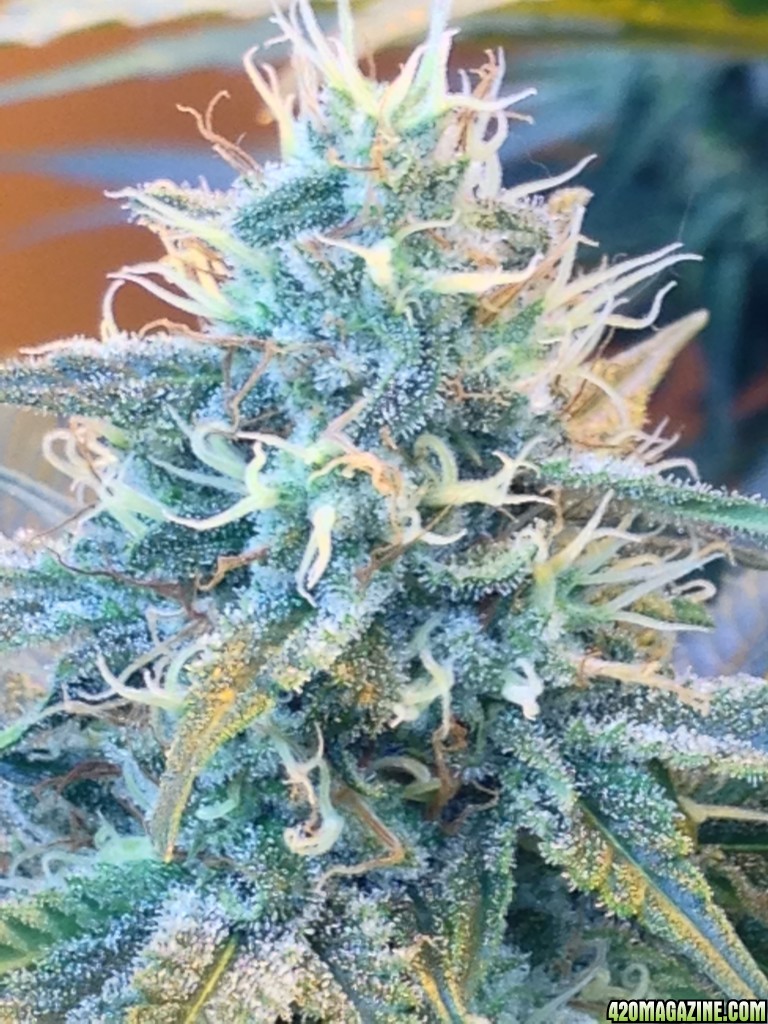 I'd appreciate your thoughts as to how much longer my girls need to mature. I'm chomping at the bit. 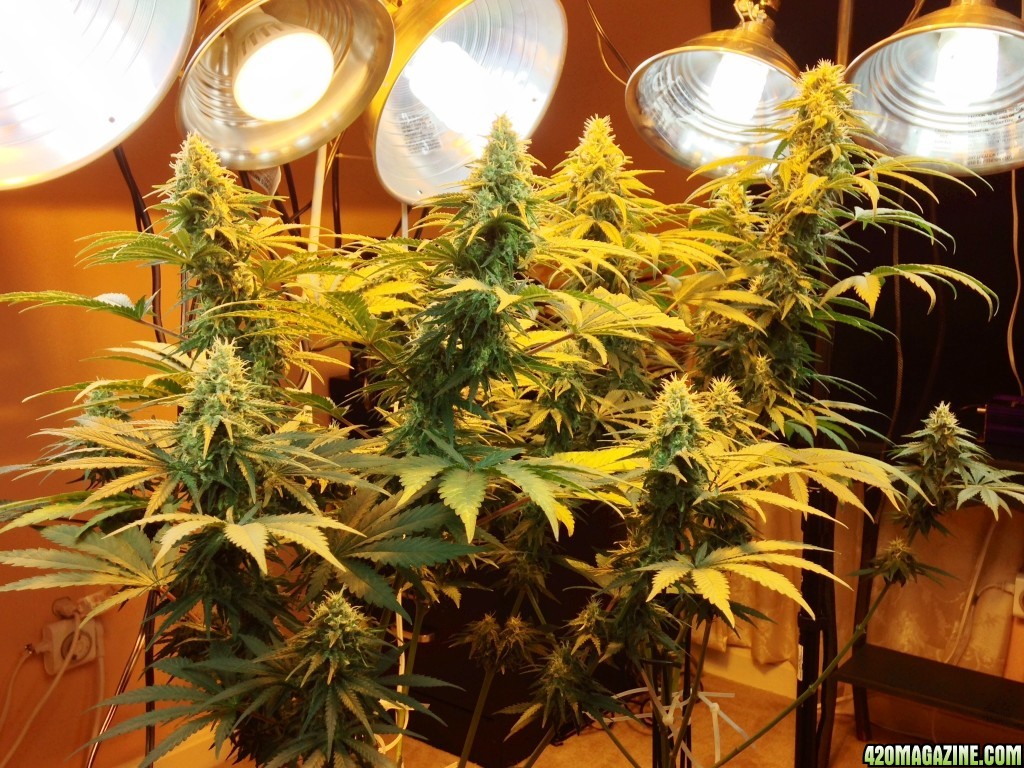 Just curious, thanks for sharing

Thanks for the props!

The flower smell is just coming on six weeks in - it's a musky dank smell (quite pleasant).

I begin removing lower/smaller branches two weeks into flower. As for growing dense COLAS i've had success with topping, modest defoliation and, of course, snipping some of the popcorn buds to promote growth up top. The biggest factor for growth has been upgrading to MH/HPS - hands down. Day 42: 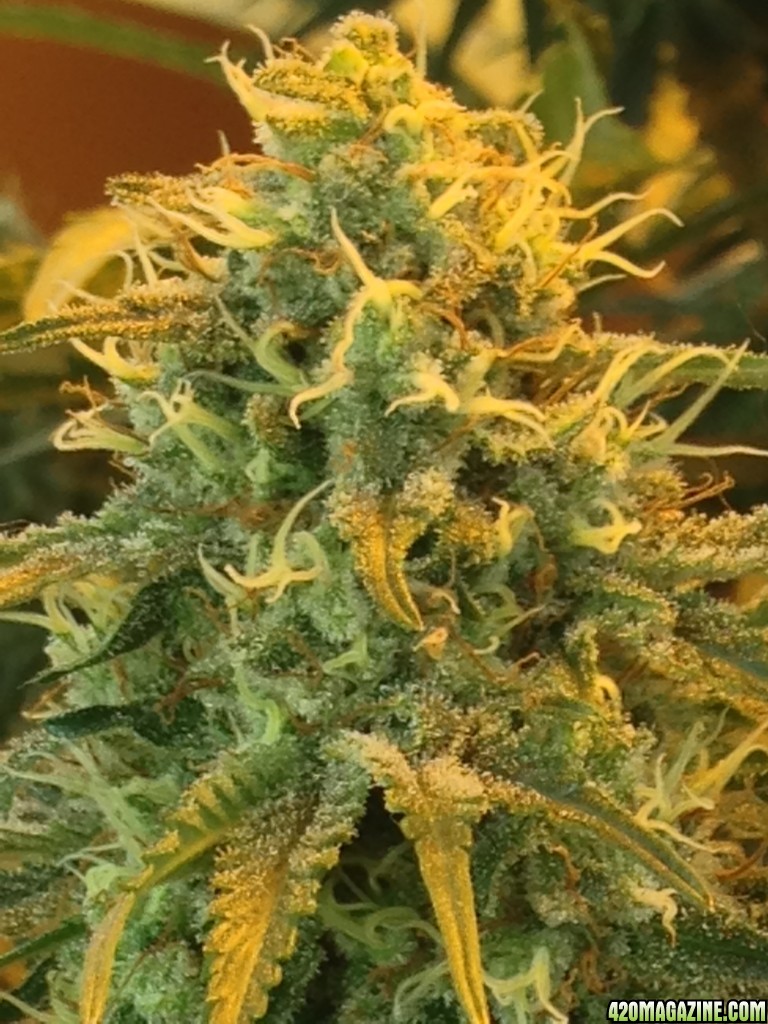 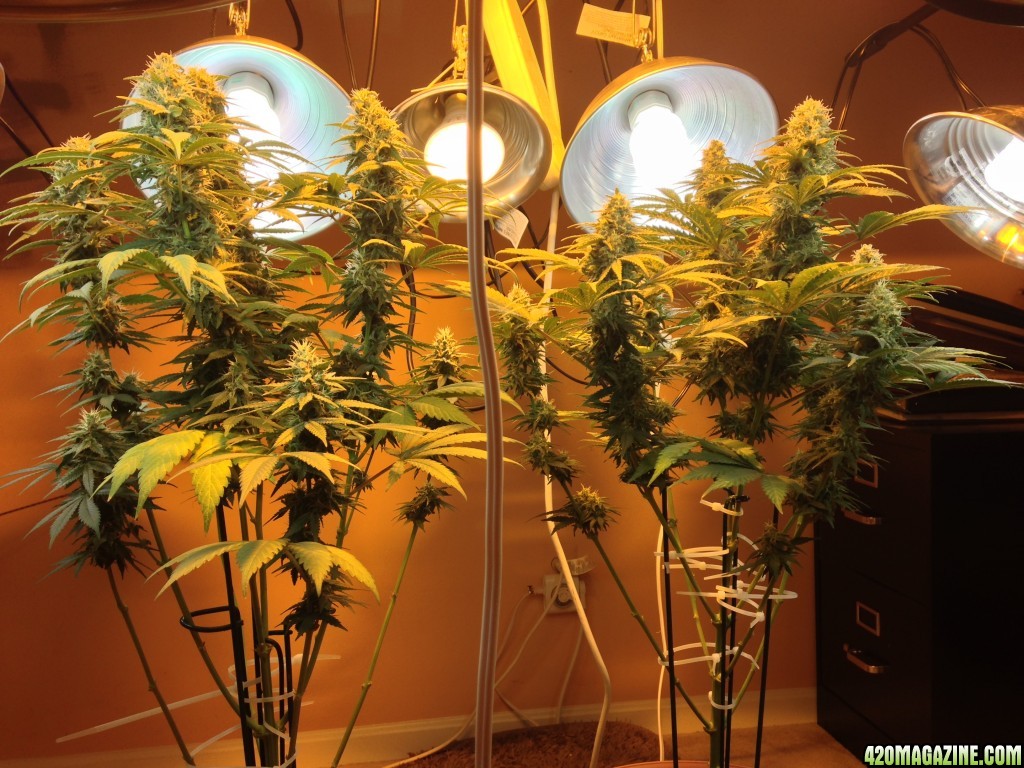 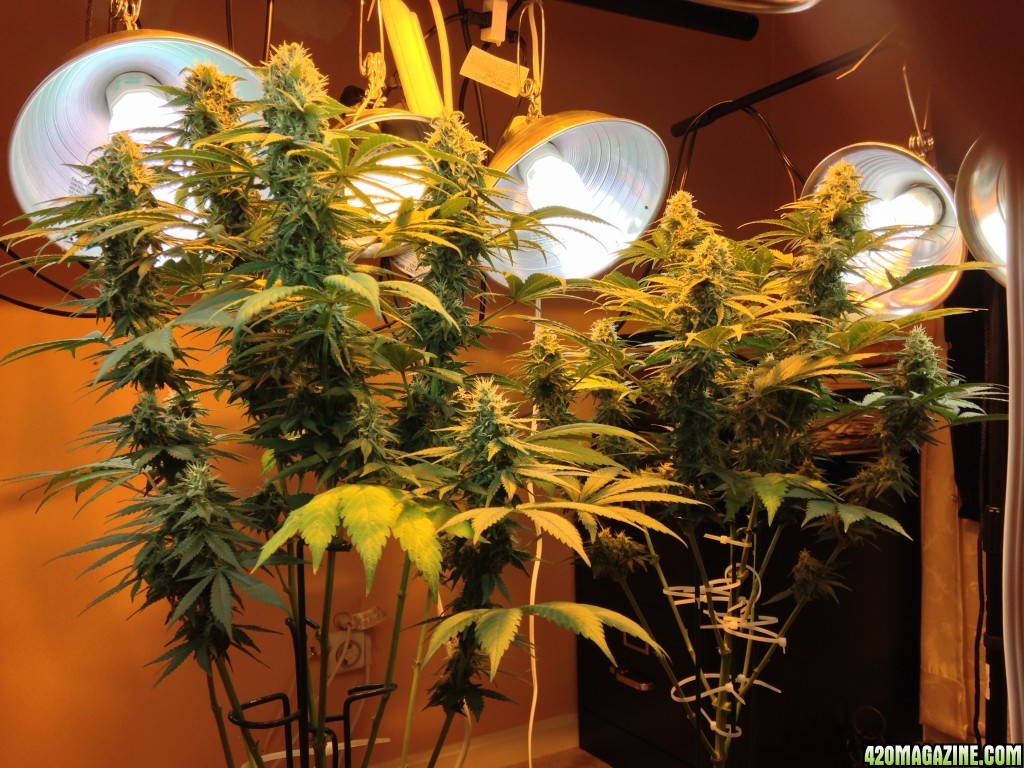 Thanks for the response, learning a lot. They are looking better and better!! 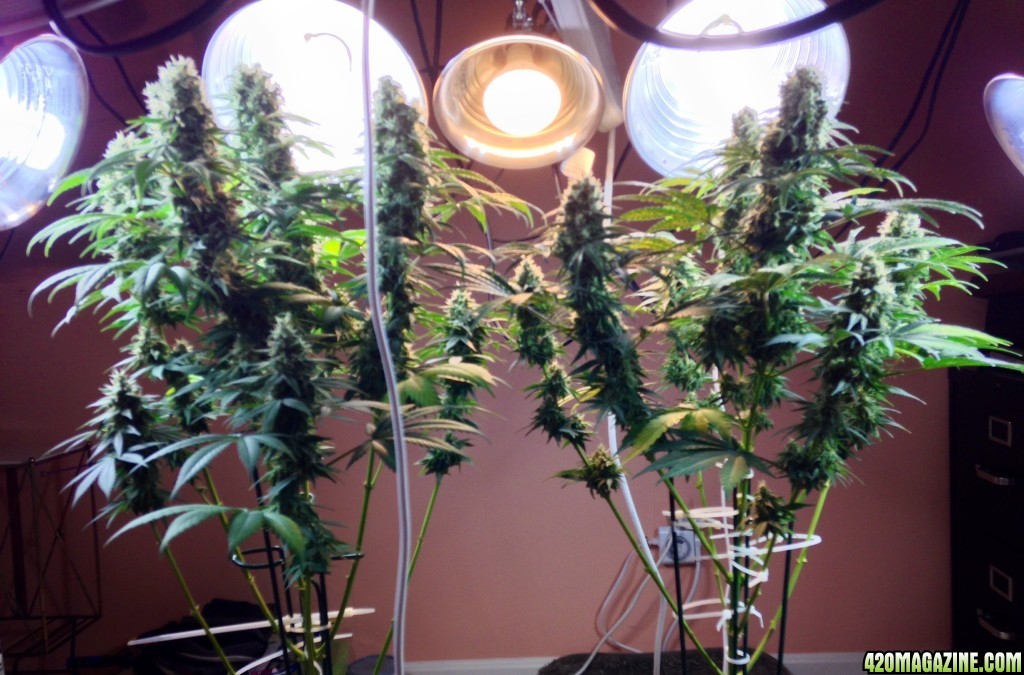 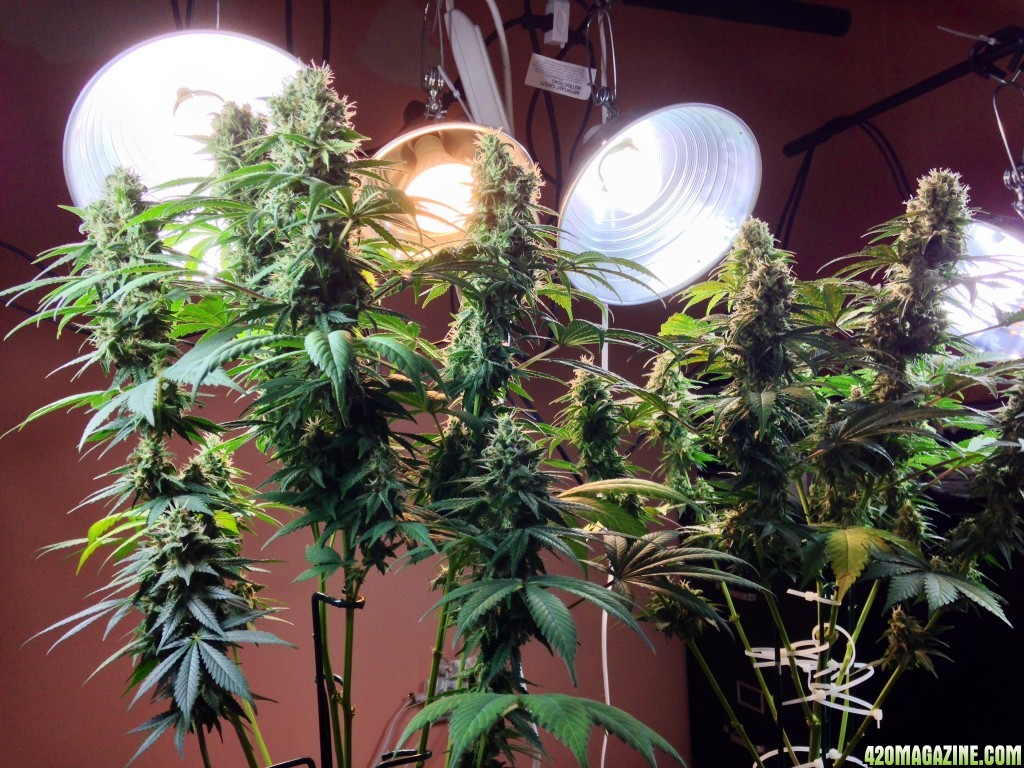 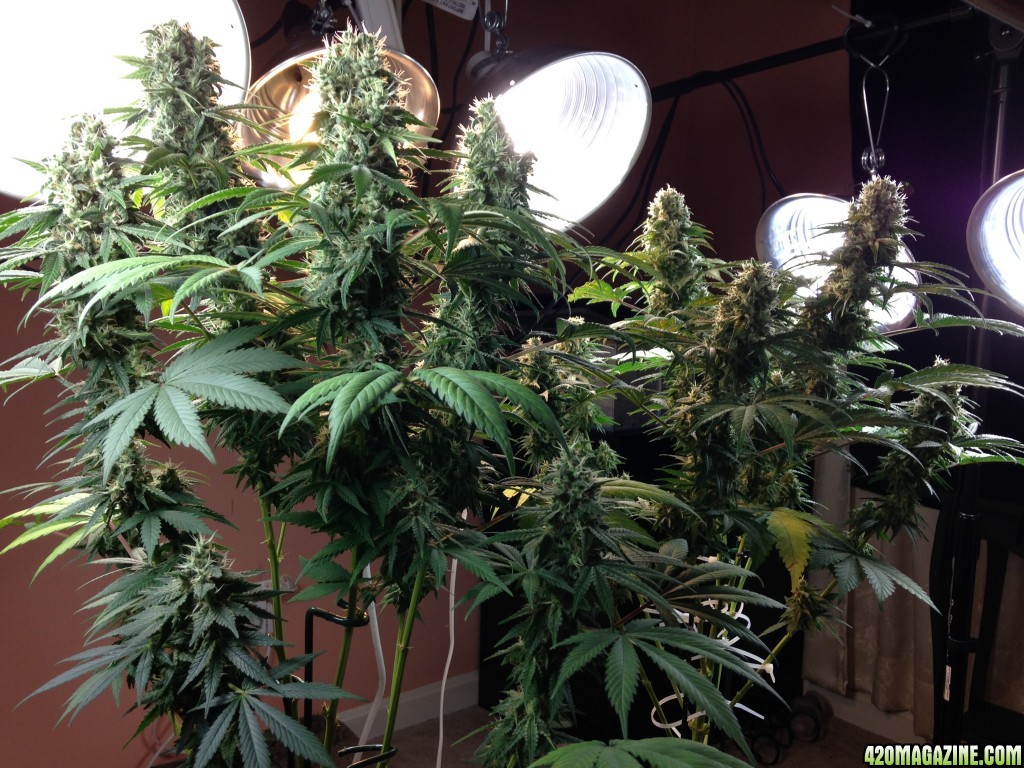 I'm very happy with the results - my girls may come down in another week or so.
C

so I harvested and began curing my gals last week - seven days ago in fact. That dreaded chlorophyll smell has dissipated altogether and some of the smaller buds are dry enough to sample.

This being a Sativa dominant hybrid I didn't anticipate developing the super sticky white trichomes seen in Indica dominant strains. At first glance it's not particularly odoriferous (see below). Nonetheless, it is quite potent and delivers a very "heady" uplifting effect along with a subtle body buzz. As for taste almost cherry like - very mild smoke with no harshness or unpleasant aftertaste (i.e., chlorophyll). The buds are dense and feel much like a big marshmallow that has been left on the counter for a couple of hours (hard exterior with a soft sticky interior). Cracking into a nug released a pleasant floral bouquet and that lovely resiny goodness requiring Goo B Gone to remove from fingers lol.

The overall yield was 5.47 ounces. This being my first use of MH/HPS as primary lighting I'm pretty happy with the results. So is my GF who is the primary beneficiary of my horticultural activities. If she's happy I'm happy.

Lol... I'm glad I found this post! I am on day 31 flowering with Dinafem's White Widow also! I looked at your 28-day-old post and your buds were bigger than mine are now. I have never used an HPS before. I have consistently used SunMaster Warm Deluxe, which is pretty much an all purpose bulb... Also, I maintain a higher nitrogen level than most growers in the bloom phase.

My first grow was with Nirvana's Aurora Indica, and I yielded about six zips. Granted, this was an indica, which means heavier harvest than a sativa, but the potency was higher than anything I have ever smoked. To cut to the chase, I think that the all-purpose approach (lighting and nitrogen levels) focus the plant's efforts on doing what it does... Produce sticky resin to attract pollen and to defend itself.

All that being said, your buds are bigger than mine, but I would bet everything I own that mine will be more potent IMHO.

Btw, I don't have a URL so I can't seem to post a pic... tho it would be awesome if I could because we could do a 28-day side-by-side! I am using an app called Forum Runner and I can't attach or insert.
Overall grow style: "Keep it modular!"

what were you using prior to MH/HPS ??

I was using mostly CFL's (23W) and some LED's (20W) for vegging and flowering. It got to the point where I was using close to 600W total (and scores of reflectors lol) so the switch was a no brainer and something I should have done a long time ago. It's great.

thanks man, right now im at 230 watts total ,,mostly on 1 plant right now .I found a good deal on 65 watt 65k non spiral cfls here locally.
gonna add two in a y adapter. if you dont mind takin a look...my girl is 17 days under 12/12..started flowering the ninth day...im thinkin she is slow..what do you think? 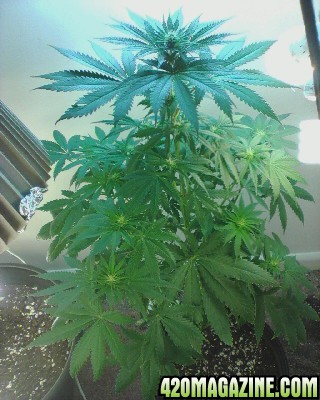 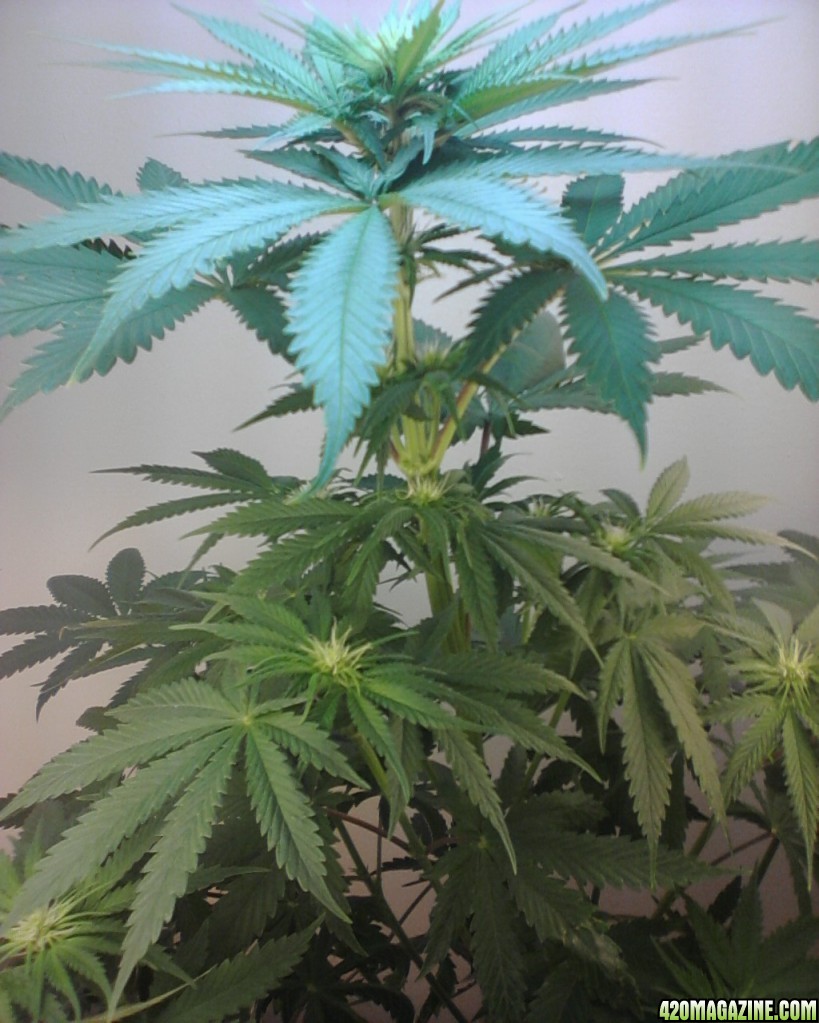