Why Congress Did Not Stop Marijuana Legalization In Its Own Backyard

Last Tuesday, the chairman of the House committee that oversees the District of Columbia warned D.C. officials that they could go to prison if they insisted on implementing Initiative 71, the marijuana legalization measure that voters approved by an overwhelming margin last November. "There are very severe consequences," Rep. Jason Chaffetz (R-Utah) told The Washington Post. "You can go to prison for this. We're not playing a little game here."

D.C. officials did not seem intimidated. "I would hope he is focused on doing his job," D.C. Mayor Muriel Bowser said. "Bullying the District is not what his constituents expect." D.C. Council Member Brianne Nadeau called it "offensive to the American value of self-governance" that "a representative from half a continent away is threatening to lock up our mayor for the crime of implementing the will of District voters."

Despite Chaffetz's considerable leverage over the District, his threats could not prevent Initiative 71 from taking effect, which happened automatically on Thursday morning. The powerful congressman's impotence in the face of an outcome he considers intolerable–people growing, possessing, and sharing marijuana without fear of arrest–highlights the waning influence of pot prohibitionists, who were unable to block marijuana legalization in the nation's capital even with Republicans controlling both houses of Congress.

Because most members of Congress are not clamoring to nullify Initiative 71, the prohibitionists' political weakness is reflected in the weakness of their legal arguments. In a letter he sent to Bowser on Tuesday night, Chaffetz claimed Initiative 71 had been nullified by the omnibus spending bill that Congress passed in December. The bill included a rider introduced by Rep. Andy Harris (R-Md.) that says "none of the funds contained in this Act may be used to enact any law, rule, or regulation to legalize or otherwise reduce penalties associated with the possession, use, or distribution of any schedule I substance."

That language was never debated and never received a vote in either chamber; instead it was inserted during backroom negotiations over a must-pass bill at the end of the legislative session. Hence the Harris rider hardly signifies broad congressional support for overturning Initiative 71. In fact, Bowser and other local officials, including D.C. Council Chairman Phil Mendelson and D.C. Attorney General Karl Racine, maintain that the amendment had no impact on Initiative 71 because the ballot measure was enacted when the vote for it was certified on December 3, two weeks before the spending bill was signed into law. Chaffetz disagrees, saying a D.C. law is not enacted until it survives the congressional review mandated by the District of Columbia Home Rule Act:

In the 2002 case to which Chaffetz refers, Marijuana Policy Project v. United States, the U.S. Court of Appeals for the D.C. Circuit upheld the Barr Amendment, a congressional spending restriction that blocked implementation of a medical marijuana initiative that D.C. voters approved in 1998 and prevented a similar initiative from appearing on the ballot in 2002. Notably, the Barr Amendment said D.C. could not "enact or carry out any law, rule, or regulation to legalize or otherwise reduce penalties associated with the possession, use, or distribution of any schedule I substance." The Harris rider, by contrast, applies only to enactment, not to execution. Furthermore, the Barr Amendment was in effect before the 2002 initiative was proposed, which is why the D.C. Board of Elections refused to certify the measure so that its supporters could start collecting signatures to qualify it for the ballot. That was the decision at issue in the 2002 case. Initiative 71, by contrast, was approved by voters in November, and the vote was certified well before the Harris amendment took effect.

Chaffetz suggests that the D.C. Circuit's reference to "the congressional veto power" means D.C. laws are not really enacted until they survive review. But the implicit analogy to a president's veto power is misleading, since a bill passed by Congress does not become law unless the president signs it. Under the Home Rule Act, by contrast, a bill passed by the D.C. Council or an initiative passed by D.C. voters "shall take effect" at the end of the review period unless Congress exercises its (rarely used) veto power. If Congress passes a joint resolution of disapproval and gets the president to sign it before the end of the review period, the resolution "shall be deemed to have repealed such act, as of the date such resolution becomes law."

In other words, the Home Rule Act describes a piece of legislation submitted for congressional review as an "act" that "take effect" automatically if Congress does nothing and is "repealed" by a resolution of disapproval. That seems like pretty strong evidence that Chaffetz is wrong and Bowser et al. are right about the legal status of Initiative 71: It was enacted in early December, submitted to Congress by Mendelson on January 13, and took effect on Thursday, after 30 legislative days had passed without a resolution of disapproval.

If only Harris had thought to block implementation of the initiative, instead of trying to stop something that had already happened. Actually, he did think of that: Like the Barr Amendment, an earlier version of his rider would have barred the District from spending money "to enact or carry out" marijuana legalization. Those three words were dropped during negotiations over the spending bill. Harris's spokesman told The Washington Times he agreed to the excision to make it clear that he was not trying to reverse a 2014 law that decriminalized marijuana possession in the District. That law made possessing up to an ounce of marijuana a civil offense punishable by a $25 fine instead of a misdemeanor. Since Harris had tried and failed to override the decriminalization law earlier in the year, his concession was a notable sign of prohibitionist weakness, and it proved to be a disastrous tactical error.

Although neither Harris nor Chaffetz is willing to concede that point, there is little they can do about it now. It is doubtful that a federal court would agree to adjudicate the question, and it does not sound like anti-pot Republicans are eager to find out. In interviews with the Post, Chaffetz declined to say whether he would try to challenge Initiative 71 in court, and Rep. Mark Meadows (R-N.C.), who chairs the House subcommittee with authority over D.C. and cosigned Chaffetz's letter to Bowser, said "there's no talk of litigation."

Chaffetz's threat of prison for D.C. officials who implement Initiative 71 was a desperate bluff. He argued that Mendelson, the D.C. Council chairman, violated the Harris amendment when he transmitted the initiative to Congress, since that action required some expenditure of public funds, if only to pay for the time that Mendelson and his staff devoted to it. Not only that, Chaffetz said, but "even the mere act of transmitting the Initiative by the District is likely in violation of the Anti-Deficiency Act," which authorizes criminal penalties, including fines up to $5,000 and up to two years in prison, for federal or D.C. officials who misuse money appropriated by Congress. Chaffetz even suggested that "developing rules for law enforcement or the general public" regarding the implications of Initiative 71 would be a felony.

According to a 2009 book published by the consulting firm Management Concepts, "no case has been documented in which anyone has been prosecuted for, much less convicted of, a violation of the Antideficiency Act." Making that threat even more remote, any prosecution would have to be pursued by an administration that opposes congressional interference with the District's marijuana policies. "I think the attorney general should prosecute people in the District who participate in this under the Anti-Deficiency Act," Harris told the Post. Don't hold your breath.

Harris and his allies still can punish the District for declining to punish cannabis consumers. "I think it plays out on the funding side of it," Meadows said. "There's a lot of funding questions, whether it's specifically about this or other related topics that become very difficult for D.C. to be able to address without the help and will of Congress." But it's not clear how much support anti-pot Republicans, who did not even bother to introduce a resolution of disapproval, will get from their colleagues.

Even Republicans who view marijuana with distaste are cognizant of polls showing that most Americans favor legalization and that support is especially strong among younger voters. Making a priority of forcing D.C. to reinstate penalties for possession, noncommercial transfers, and home cultivation would contradict the GOP's avowed commitment to local control and make Republicans look like a bunch of intolerant bullies.

If the difficulty of reversing Initiative 71 is making Chaffetz's head hurt, here is a proposal that will make it explode. It is widely assumed that the Harris rider stops the D.C. Council from pursuing its plans to legalize commercial production and distribution of marijuana, since that would require new legislation. But there may be a loophole for that as well. Walter Smith, executive director of the D.C. Appleseed Center for Law and Justice, notes that "Congress has prohibited the District only from [spending] funds appropriated for the current fiscal year on enacting marijuana reform." He says that means "the District would be well within its authority to enact new legislation, provided it uses funds outside Congress's appropriation for fiscal year 2015," such as its contingency reserve fund.

In fact, the District arguably could use current funds to pay for the regulatory system it creates, since that would amount to carrying out the new law instead of enacting it. So far D.C. officials have not publicly endorsed this strategy. Further legalization no doubt would enrage Chaffetz and his allies, who would redouble their efforts to re-impose pot prohibition on a city that has resoundingly rejected it. Why not let them try? 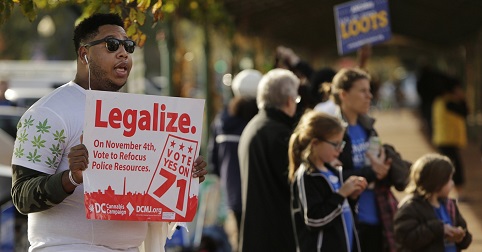 I watched an interview last week with these criminal politicians on capitol hill about this..those feckers have a lot of nerve. Wasting time, while there is far more important things to worry about. Good job madam mayor,, standing up to those thugs in suits.
MassMedMan's Tested Strains

WITHOUT QUALITY, THERE IS NO VALUE

So, I arguee that the marijuana majority takes great paines to see these 3 congressmen and the head of the DNC removed from office. If these 4 people are voted out for crimes against cannabis then surely full federal legalization will follow. I'm just saying.
B

The DC fat cat politicians can now smoke and even grow weed in Washington legally and at the same time they put folks in prison in Indiana for even minor possession!

Whats wrong with this picture?
J

blaccie said:
The DC fat cat politicians can now smoke and even grow weed in Washington legally and at the same time they put folks in prison in Indiana for even minor possession!


Times are changing and yes sometimes it seems to damn slow.. But the Mayor that stood her ground should be voted person of the year as far as I am concerned ..

birdrussell said:
So, I arguee that the marijuana majority takes great paines to see these 3 congressmen and the head of the DNC removed from office. If these 4 people are voted out for crimes against cannabis then surely full federal legalization will follow. I'm just saying.
Click to expand...


The head of the DNC is not a public office and does not appear in this article.... Unless you mean something I don't understand by DNC.
Radogast

D.C. Underground Pot Market Is Growing, Thanks To An Unwitting Chaffetz