California's organics-loving, go-green mentality is what makes the state a hub for environmental progress, but in the case of the cannabis industry, some say it could be its downfall. Pesticide regulations released earlier this year by the California Bureau of Medical Cannabis are some of the most strict – if not the strictest – requirements in the country, and have left both cultivators and testing laboratories reeling.

"They will be exceptionally difficult if not virtually impossible [to meet]," said Dr. Jeffrey Raber, chief executive of The Werc Shop, a cannabis research and testing facility in Monrovia.

Pesticides are an integral part of both the indoor and outdoor agricultural industry, and are used to help fend off or kill mites, bugs, diseases or other threats to a plant's integrity. They're also poison, and most industry members agree pesticides need to be regulated in a manner comparable to other agricultural products we consume. In fact, weed faces additional scrutiny because it is also a form of medicine, and some consumers who use it also suffer from compromised immune systems.

However, California's current "residual tolerance requirements" – basically, how much of certain pesticides are allowed to remain on cannabis products when they're ready to hit the market – may pose problems on the production line. For one, the microscopic amounts that labs will be testing – either on a parts per million (ppm) or parts per billion (ppb) basis – require extremely expensive equipment that's difficult to maintain and that many facilities will have to specially purchase, said Raber. It's like investing in a house, he said, and can cost upwards of $500,000.

This could prove not only prohibitive for testing facilities, but result in a laboratory bottleneck as producers across the state flock to get products tested in accordance with California law.

In short, people consume less cannabis, so the acceptable pesticide rates can be higher.`

"You're going to eat a whole lot more apples and grapes than you are cannabis," he said.

Acceptable pesticide levels vary depending on if the product is cannabis flower, an edible or another type of processed cannabis, and Raber said that distinguishing based on method of intake makes sense. When one eats weed, it's metabolized and filtered by the liver, and there's already an existing body of research on how pesticides are processed in oral consumption, he said. When weed is smoked however, it goes straight into the bloodstream. In addition, there's not a prior body of research on the topic, so it's appropriate that regulators exercise caution with requirements for cannabis flowers.

The draft regulations may also be difficult for cultivators to meet, especially because up until this time, most had little-to-no guidance on what types of pesticides to use or at what point of the growing process they should be applied, said Raber. There is the added complication that Myclobutanil (among others) can spread through groundwater and rainwater, and show up in the product of a grower who hasn't even used that pesticide.

"Pesticide testing makes up a very small percentage of the number of tests we do because it's expensive and no ones requiring it yet," said Josh Wurzer, president and lab director of SC Laboratories Inc., a cannabis testing facility in Santa Ana.

Of the cannabis products SC Labs has tested, in which they screened for the 12 most common pesticides, about 77 percent of cannabis concentrates would fail California's proposed regulations by a landslide, said Wurzer. Findings by a NBC investigation released earlier this year echo this conclusion. In a review of 44 weed samples obtained from 15 different dispensaries throughout Southern California, a lab found that 93 percent of them tested positive for pesticides, at high enough levels that they would have been banned from states that currently regulate pesticides in cannabis.

California's regulations were determined in large part by recommendations made by the California Department of Pesticide Regulation, which oversees the sale and use of pesticides in an effort to protect human health and the environment. Toxicologists used research data provided by the United States Environmental Protection Agency, as well as existing regulations from other states, to try and pinpoint quantities of pesticides safe for use.

"We welcome these tight regulations on pesticides," said Ryan Jennemann, manager of sustainability-focused THC Design, a cultivator based in Los Angeles.

For producers like Jennemann – whose pest management program is 100 percent organic and consists of only natural bacterias and beneficial fungi – these proposed requirements will only serve to further distinguish them from the pesticide-using pack. The draft requirements are a lot stricter than anticipated, said Jennemann, but they're also direly needed, as independent studies have shown widespread use of hormones and chemicals in California's cannabis.

"You can see how almost nobody in the industry is growing a safe product," he said. "I have been in zero grows over 4 [or] 5,000-square-feet that I haven't seen banned substances."

As for the hotly disputed Myclobutanil, said Jennemann, growers shouldn't be using it in the first place. (Although the drug is classified as having "low acute toxicity," workers exposed to it have reported everything from nausea and eye irritation to abdominal pain and vomiting, and studies in rats show it could have long-term effects on reproductive systems)

But even Jennemann isn't totally satisfied with the proposed regulations. For one, when testing is regulated on the parts per billion level, it can detect pesticides that were present in the product not just weeks, but months before production. This can pose a huge issue for even the greenest of companies, since they often buy genetics or do collaborations with other growers and can as a result be penalized for a poison that was never even applied by them.

With a January 1 rollout looming, Alex Traverso, chief of communications at the Bureau of Medical Cannabis Regulation, said that these testing requirements are not set in stone. The state is withdrawing the proposed medical regulations and reworking guidelines that combine both medical and adult-use industries, as dictated by SB 94. While California will certainly have some of the "more stringent testing standards of any state that's legalized thus far," Traverso said they're trying to protect consumers while minimizing financial burden on producers.

"All along we recognize that the overall goal here in terms of legalizing and regulating the industry is to do as much as you can to eliminate the black market, and you don't do that if you make things cost-prohibitive," he said. 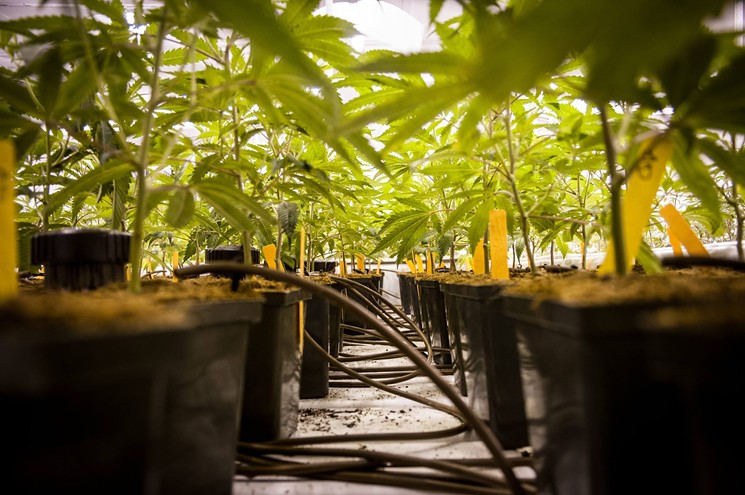 This will help the cannabis producer and consumer in California. Other states have similar regulations and they're doing fine.

I can understand how large facilities have come to rely on Eagle20 and the like. I think they will adapt better practices and do ok, grow healthier plants, have healthier workers.

In short, people consume less cannabis, so the acceptable pesticide rates can be higher.`
Click to expand...


Bad pun time...."can't compare apples to oranges" as they say. Majority of the folks don't consume it, and not many folks that buy apples burn them and inhale the pesticides thru their lungs which hits the blood stream directly. So yes you may consume less (I don't eat apples or berries or almonds much so my cannabis usage probably higher anyway) but it is being filtered by your body differently and also is washed more often.

Oregon has one of the strictest chemical restrictions so far, and I really kind of like that, as I have no use for using chemicals that make big huge heavy flowery buds (hence why I stay as close to organic as I can, and stay away from the fancy pretty label stuff with the fancy names for what nutrients/chemicals I do use). As I'm sure chemicals for your Flowers are a lot less restrictive than chemicals that can be used with food, and my guess they don't classify Cannabis as a food product or they don't yet anyway. I put enough crap in my body in my mis-spent youth that it is more of a concern now that I am older, as I never expected to hit 50 so it wasn't a concern/care/issue back when I was "young and dumb and full of........" era

I think the regulations are good... its about time!

Too many "medical" and "commercial" growers put harmful crap on their plants positioning profit over patients health. That is utterly irresponsible and of poor moral character. Who cares if unscrupulous cannabis growers get hurt... they don't give a flying F about the people depending on their meds...

T
What Are You Smoking? Study Finds Pesticides Transfer To Marijuana Smoke