In November, Washington D.C. voters decided with their ballots to legalize marijuana, but that doesn't mean district denizens can light up just yet, reports Andrew Gabrione of The Atlantic.

Although D.C. gained significant independence with the Home Rule Act of 1973, all its laws and budgets still need to be sanctioned by Congress, a body in which it has no voting representative. This set-up renders the district especially vulnerable to the whims of national politicians, some of whom–historically, at least–have prioritized partisan interests over D.C.'s right to self-determination.

Legalized marijuana is the next chapter in this struggle.

The measure means that if a D.C. resident is at least 21 years old, he or she can can possess up to two ounces, give as much as one ounce to other adults, and grow as many as six marijuana plants at home.

Congress will have 30 business days after the election's results are certified this month to review the initiative, as it does with all new laws in D.C. (Certain criminal laws in the district get a 60-day review period.) If Congress passes a joint resolution rejecting the ballot, President Obama could approve or veto their decision. In the latter case, the initiative would officially go into effect once the D.C. Council creates a system for regulation and sales, which was not part of the ballot.

"Any attempt to overturn this vote would be a violation of essential American principles," said James Jones, communications director of DC Vote, a non-profit organization that works to secure representation in Congress for the district. "It would be Congress acting by fiat–not by any sort of democratic principle, but by hypocrisy." 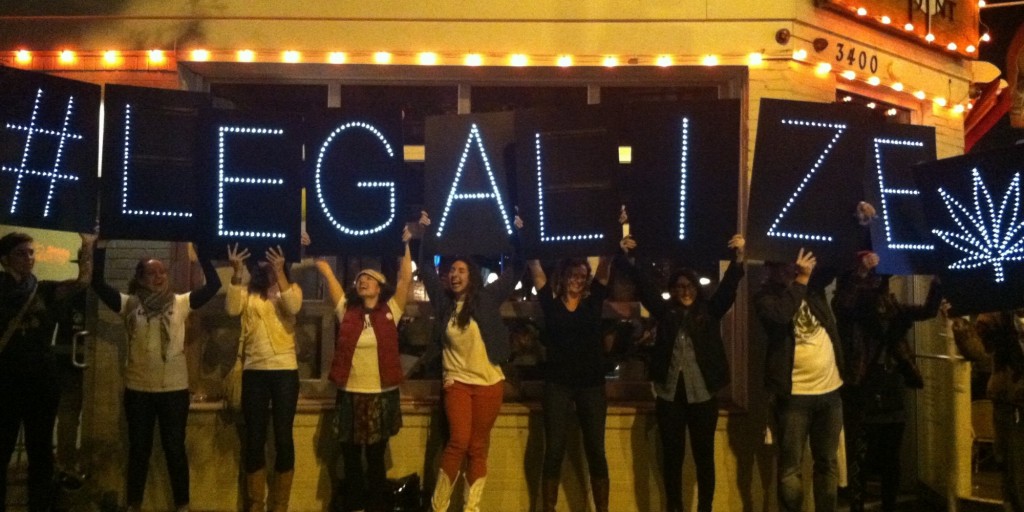 In November, the District of Columbia voted to legalize recreational use of marijuana, but a new congressional budget deal has a provision barring implementation.

When residents of the District of Columbia voted to legalize recreational use of marijuana last month, cannabis fans cheered. Then they quickly realized that Congress – which has oversight over D.C.’s affairs – could overrule the will of the voters.
Now, it appears, that fear will come true sooner than expected – not in the next Congress, when Republicans will control both chambers, but during the lame duck session currently under way.

Tuesday night, Senate Democrats and House Republicans reached a deal to fund the federal government through Sept. 30 of next year. That means no government shutdown. But the deal’s fine print also includes a provision that bars implementation of Initiative 71, the marijuana legalization measure D.C. voters approved by a 2-to-1 margin on Nov. 4.

Specifically, a press summary of the spending bill posted online by the House Appropriations Committee says it “prohibits both federal and local funds from being used to implement a referendum legalizing recreational marijuana use in the District.”

Advocates of voting rights for the District’s 646,000 residents are outraged.

“If reports are true, members of Congress from both parties bargained away the rights of the people of the District of Columbia and in doing so compromised the core democratic values of the United States,” Kimberly Perry, head of the group D.C. Vote, said in a statement to The Washington Post.

Efforts to secure full voting representation in Congress for D.C. residents have a long history of frustration. The reality is that the federal enclave is not a state, and therefore its residents do not enjoy the same voting rights of states, as granted by the US Constitution. The Constitution also grants Congress jurisdiction over the District.

In 1973, Congress established “home rule” in D.C., allowing local officials to govern the District. But Congress maintains the right to overrule local decisions, including ballot measures.

Most of the time, Congress leaves D.C. alone, but on social policy, congressional Republicans have been known to jump in. On abortion policy, the District is not allowed to use its own tax revenues to fund the procedure for low-income residents. Republicans in Congress blocked sales of medical marijuana in D.C. for 11 years.

In the current Congress, Rep. Andy Harris (R) of Maryland is spearheading the effort to thwart legalized recreational marijuana in D.C. He claims “fairly broad-based support in Congress against legalization.”
But marijuana advocates aren’t taking this lying down.

“Tonight we march!” tweeted Adam Eidinger, Chairman of the DC Cannabis Campaign, Wednesday morning.
Tonight we march! “@whiteknightpua: can we rally a protest on the Hill? Maybe have people set up camp outside Andy Harris' offices?”— Adam Eidinger (@aeidinger) December 10, 2014

The march Wednesday evening will begin at the Justice Department and end at Capitol Hill, and civil disobedience that could lead to arrests.

Glad you voted yet?

will of the people my ass

we elected you,we pay you,we vote and get passed,have a majority vote-pass

then the people WE elect and whom we PAY say,hell no
Dont sweat the petty stuff,and dont pet the sweaty stuff

I don't think this will block the growing of six plants yourself, it just blocks recreational sales - right?

this happen a while ago---but the employee has become the boss.
Dont sweat the petty stuff,and dont pet the sweaty stuff

Everything! Except the past decrim law that meant only $25 fine for under an oz. Fcuked the people.

Aug 6, 2014
J9BLACK
J
J
Why Congress Did Not Stop Marijuana Legalization In Its Own Backyard