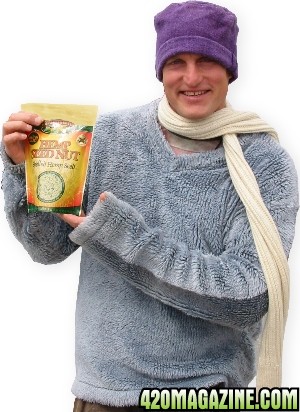 NOV 2005 - Woody Harrelson has swapped marijuana for yoga, because the spiritual practice gives him a better high, without the lows.

The actor has long been a poster boy for smokers of the drug - but is attempting to get healthy, and had found enormous benefits from a more active, weed-free lifestyle.

He says: "Yoga and smoking a joint are very similar things. One, you take the elevator to the top floor, and the other you climb up the mountain. But the one gives you ultimately a deficit, whereas the yoga continually pays dividends."

"I do think it helps me. You can look in my eyes and probably see there's some kind of agitation in there."

"I do smoke, but I don't go through all this trouble just because I want to make my drug of choice legal. It's about personal freedom. We should have the right in this country to do what we want, if we don't hurt anybody. Seventy-two million people in this country have smoked pot. Eighteen to 20 million in the last year. These people should not be treated as criminals." - Woody Harrelson

Hemp is not an inexpensive fiber, about 100% higher than cotton. The high processing costs and limited quantities that are available are responsible for the higher cost. Beyond the problems of technology, hemp proponents are trying hard to overcome the obvious image problem. A lifelong environmental activist, Woody Harelson has proven to be an effective spokesperson for the legalization of hemp. Harrelson has been jailed several times, staging a planting of hemp seeds in support of farmers lobbing for legalization. He has been seen sporting a custom made Giorgio Armani hemp tuxedo accessorized with hemp shoes.

Actor/marijuana activist Woody Harrelson is one of a select group of actors that have triumphantly made the transition from the small screen to major motion pictures. He endears himself to millions of television viewers as Woody Boyd, the affable but baffled bartender in NBC's long-running, much loved hit comedy series CHEERS. Harrelson won an Emmy Award in 1988 for his work as Woody Boyd and was nominated four additional times during his eight years on the show.

Mr. Harrelson sits on the NORML advisory board with Willy Nelson, Bill Maher, Daniel Stern, Rick Steves, and Robert Altman, among other prominent activists opposed to marijuana prohibition. He has consistently lent his celebrity status to the cause of reforming marijuana laws.
420 Magazine
Creating Cannabis Awareness Since 1993