These girls are now just been put to 12/12 for 2 days and they had a 10 hours darkness for one night just before the full 12 hour cycle, 3 days before flip they needed a top up so I added bloom nute instead to mix in, they been on full strength nute for 2 weeks before that, solution drops by 1 liter each day with no change to ppm for 2 weeks before light switch and remains the same today, which I did change out the solution yesterday to full bloom with addictives, and they are still eating and drinking up the same with no ill effects.

The environment have been sorted with the upgrades of the room,
Temp light on 73f to 74f (was at 75f to 76f but after the temp dropped for 2 days and seeing them grow better at lower temp I kept them at that)
Temp light off 65f
Humid kept at 50% 24/7 till more pistils pop and I will drop it to 40%
Water temp kept below 70f usually in the 66f to 69f mark
600w dual spectrum with aero 8 reflector covering 1m/Sq with over 30,000 lux on all corners, by the time they are done stretching they should be at the height for 50,000 plus lux, I can drop the light ifneed to pull them around to space them out and resulting them being shorter.
The board they being train on is covered in aluminium tape, same as the buckets
2 airstones each with 420 l/h pumps each
White widow X big buds on the left bubblegummer on the right
During veg I removed all secondary shoots, leaving only main shoots growing, till last week in veg and I left them alone, but I didn't remove the fan leaves, some broke accidentally but less than 10 altogether
This seems to be the fastest growth I ever seen, especially the ww X bb, both girls are the same age but the ww X bb is noticeably bigger than the bubblegummer but the bubblegummer also has just as many branches just shorter and bushier, much harder to manage till she stretch out hopefully soon.

Anyone tried this before rather than lollipopping after the stretch?

Nute are Advance Nutrients Sensi grow A B Sensi Bloom A B, along with voodoo juice for first week in flower then big buds, bud candy(all the way till flush) added in 2nd week till last 2 weeks I switch to overdrive and then gh ripen and flush, I like to let it go a week longer than usual for more amber trichs

So far all looking really good and fast 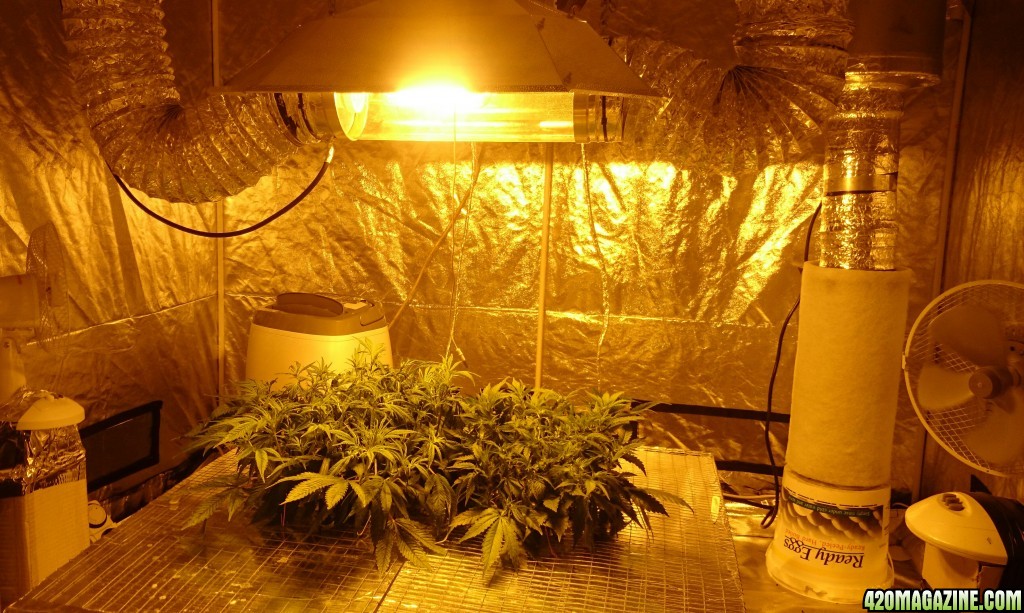 Seems very dead here on this thread, well the thread maybe dead, but them girls are more alive than ever, 2days since full strength bloom switch first week of 12\12, over 50ppm dropped along with 2 liter of water gone in each of them, not to mention there's no burn, they look like they can take a bit over full strength, that's another thing I never encountered before since I'm using AN I've only ever went.full strength after at least 2 weeks. These2 are on full strength with no burn since before end of second week veg and been on full since and they want more

Looks good man, that's a nice area you got there. I have a Cali Big Bud and love it, I have also grown White Widow and loved it too. I have never tried a cross of them both, but that should be some fire when it's ready.

Bubblegum is an awesome strain as well, and you should love it if you haven't tried it before. Good job, and nice setup.

the last grow didnt go so well, so potency and quantity were not as expected but taste were very very good, hope they get close to full potential this time.

I had bubblegum 4 years ago and really missed it, can't wait for this to be ready

S
trying something new to myself anyone tried it before?