It was 70 years ago yesterday that Congress passed the first federal law outlawing marijuana. The law, the Marijuana Tax Act of 1937, effectively banned the weed by establishing onerous taxes on buyers, sellers, producers, and prescribers and creating draconian penalties for noncompliance.

The subsequent seven-decades of marijuana prohibition have seen a vast increase in the drug's popularity and acceptance, even as it remains a lightning rod for conservative culture warriors determined to smite the hippies. Around 100 million or more adult Americans have smoked marijuana at least once, and some 16 to 20 million are regular consumers today.

According to researcher Jon Gettman, marijuana is now the nation's largest cash crop, accounting for more agricultural income than wheat, corn, and soybeans combined. It is also grist for the law enforcement mill, with some 800,000 marijuana arrests in 2005, nearly 90% of them for simple possession.

While about a dozen states have decriminalized marijuana possession, only one of them, Nevada, has done so in recent years. The others came in a wave of reform in the 1970s. Similarly, a dozen states have legalized the medicinal use of marijuana, but those measures are ignored by federal drug enforcers.

"It's hard to think of a more spectacularly bad, long-term policy failure than our government's 70-year war on marijuana users," said Rob Kampia, executive director of the Marijuana Policy Project. "Since the federal government banned marijuana in 1937, it's gone from being an obscure plant that few Americans had even heard of to the number-one cash crop in the United States. It's time to steer a new course and regulate marijuana like we do alcohol."

This week, we commemorate the beginning of federal marijuana prohibition. We would much rather be writing its obituary. 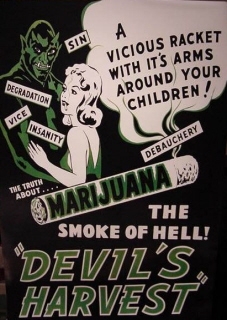 NORML Report on Sixty Years of Marijuana Prohibition in the U.S.