Also spelled marihuana, the Indian hemp plant, Cannabis sativa (cannabis), or the crude drug composed of its leaves and flowers. It is usually dried and crushed and put into pipes or formed into cigarettes (joints) for smoking. The drug—known by a variety of other names, including pot, tea, grass, and weed—can also be added to foods and beverages. Marijuana varies in potency, depending on where and how it is grown, prepared for use, or stored.

The active ingredient, tetrahydrocannabinol (THC), is present in all parts of both the male and female plants but is most concentrated in the resin (cannabin) in the flowering tops of the female. Hashish, a more powerful form of the drug, is made by collecting and drying this resin and is about eight times as strong as the marijuana typically smoked in the United States.

Mentioned in a Chinese herbal dating from 2700 BC, marijuana long has been considered valuable as an analgesic, an anaesthetic, an antidepressant, an antibiotic, and a sedative. Although it was usually used externally (e.g., as a balm or smoked), in the 19th century its tips were sometimes administered internally to treat gonorrhoea and angina pectoris.

The effect that cannabis has depends on the strength, how often it’s smoked, how recently it was smoked and how the body naturally reacts to the drug.

NEGATIVE:
* Nausea
* Coughing, asthma, upper respiratory problems
* Difficulty with short-term memory during effects and during periods of frequent use.
* Slowness and delayed reactions, especially dangerous when driving or operating machinery.
* Racing heart, agitation, and tenseness.
* Mild to severe anxiety
* Panic attacks at very high doses (usually oral) or in sensitive users
* Headaches
* Dizziness, confusion
* Paranoid & anxious thoughts more frequent
* Possible psychological dependence on cannabis
* “Mild” withdrawal symptoms occur after daily use in some users. These may last for 1-6 weeks after cessation of use and can include anxiety, anhedonia (reduced experience of pleasure), headaches, general unease/discomfort,difficulty sleeping, and a desire to smoke pot.

In many countries the use and possession of marijuana is illegal. Don’t EVER cross a border while in possession of ANY illegal drug. 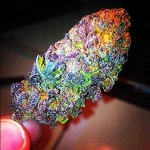 420 Grow FAQS: How Do They Get Strains to Taste Different?

What are the Different Growth Characteristics Associated with Indica, Sativa & Hybrids

How Do I Manipulate The Photoperiod For Larger Yields?

Why Should I Grow Using Medium Filled Containers?