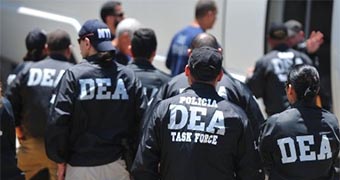 There’s a battle brewing over the interpretation of laws and the definition of “marijuana” under U.S. drug regulations ever since the Drug Enforcement Administration issued a clarification that cannabidiol, or CBD, is a Schedule I drug. Companies that sell CBD products, the non-psychoactive chemical in marijuana, say the DEA is incorrectly classifying what they produce and insist they’re not breaking federal drug law.

Special agent Russell Baer at the DEA’s office of public affairs says that the DEA did not reschedule CBD. “CBD, a marijuana extract, is and has always been a schedule I controlled substance” says Baer. Last week, the DEA published a note in the federal registry explaining that the agency created a new code to help the agency track researchers who apply to study marijuana extracts, including CBD and other cannabinoids. This led to the industry misinterpreting the agency’s actions. A slew of news articles and press releases from industry executives flooded the internet after the note went public, with headlines exclaiming how the DEA “illegally rescheduled” CBD.

CBD, which is one of the many active chemicals found in cannabis sativa, is linked to potential medical uses. In states where marijuana and hemp are legal, CBD can be manufactured and sold, but, just like THC products, CBD cannot be sold across state lines, including from one legal state to another, explains John Hudak, a senior policy advisor at the Brookings Institute.

But entrepreneurs selling CBD products across state lines say they are abiding by the law, relying on legal precedents that they claim decided that hemp and CBD products are legal to sell across state lines so long as the products come from hemp, cannabis plants with only 0.3 percent THC, the psychoactive chemical found in marijuana. Dr. Stuart Titus of Medical Marijuana, Inc., which sells CBD products across all 50 states, says the 2004 court case between the Hemp Industry Association and the DEA ruled that the DEA cannot ban products made with hemp and hemp seed that are not intended for consumption, has made his business legal.

Entrepreneurs in the industry also claim that the 2014 Agricultural Act, Section 7607 legalized the commercialization of industrial hemp and CBD. But that is not true; the bill allows for agricultural departments to create pilot programs to grow and market industrial hemp for research purposes but does not allow for commercial markets, says Hudak.

The Hemp Industries Association (HIA), a non-profit trade association representing businesses, farmers, researchers and investors working with industrial hemp, says the DEA does not have jurisdiction to say that CBD is on the Controlled Substances Act when CBD is derived from hemp. (CBD can also be derived from marijuana, but most CBD companies extract CBD from hemp.) HIA says Congress or the Attorney General only have power to augment or amend what substances are on the Controlled Substances Act.

Hudak says the DEA did not amend or augment the Controlled Substances Act.

Hudak says this issue is not a gray area–CBD is and always has been a Schedule I substance because it is extracted from marijuana and there is no federally-legal commercial market for hemp products that are meant for consumption. (Hemp based textiles, soaps and cosmetics are legal as is food made with sterilized hemp seeds because those seeds cannot be germinated.)

“The industry has convinced itself that CBD is legal,” says Hudak. “This has driven people to more explicitly violate federal law and sell a controlled substance over state lines.”

The HIA says it will monitor this development closely as it considers legal action to “protect the interests of its members and the hemp industry,” in a statement on its website.