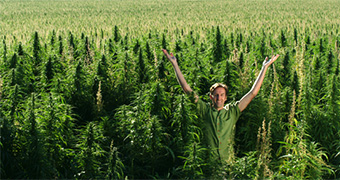 Hemp has been called a plant of “major economic importance,” as it grows like a weed, yet can be used in the production of food, personal care products, textiles, paper, and even plastic and construction materials.

Valued since ancient times as a fiber source for textiles, the hemp industry eventually made it to the US, where it flourished in the mid-1800s, through World War I and again briefly during World War II, when the war cut off supplies of fiber.

In the US, the cultivation of hemp has been banned since the 1970s when the federal Controlled Substances Act took effect. The law doesn’t distinguish between marijuana, the drug, and hemp, the plant, despite major scientific differences.

Ironically, the US is the world’s largest consumer of hemp products, yet is the only industrialized country that also outlaws its production. As a result, all US hemp products – a more than $600-million market in the US – are imported.3 As noted in “Hemp: A New Crop with New Uses for North America:”

“Cannabis sativa [hemp] is extremely unusual in the diversity of products for which it is or can be cultivated. Popular Mechanics magazine (1938) touted hemp as ‘the new billion dollar crop,’ stating that it ‘can be used to produce more than 25,000 products, ranging from dynamite to Cellophane.’”

What’s the Difference Between Hemp and Marijuana

Hemp and marijuana come from the same plant species, Cannabis sativa, but there are noted differences between the two plants. They both contain cannabidiol (CBD), which has medicinal properties. The amount of CBD however, differs greatly between the two.

Dosing, therefore, is dramatically different when you to try to use hemp in lieu of cannabis for medicinal purposes, as the latter, cannabis, is up to 100-fold more potent.

Another difference that appears to matter in terms of its usefulness as medicine relates to differing terpene profiles. Hemp contains very little of these valuable medicinal compounds.

It also contains less than 0.3 percent THC, which means it cannot produce a high or get you stoned. While hempmay not have the same medicinal uses as marijuana, it does have excellent nutritional value that may boosthealth.

If there were still any question over whether or not hemp and marijuana are two different plants, it should be put to rest with the publication of a new study that shows the genetic difference between hemp and marijuana.5

Researchers from the University of Minnesota’s (U of M) College of Biological Sciences and College of Food, Agricultural, and Natural Resource Sciences belong to one of the few groups of US scientists that have been granted federal clearance to study cannabis.

After more than 12 years of research, the team found a single gene that is responsible for the genetic differences between hemp and marijuana. As noted by Medical Daily:

“While hemp produces a non-euphoric cannabidiol (CBD) with approximately 0.3 to 1.5 percent tetrahydrocannabinol (THC) concentration, marijuana is packed with between five to 10 percent (or even higher) psychoactive THC concentration.”

The researchers believe they have “indisputable evidence” that hemp and marijuana should be regarded as separate plants.

Nearly half of US states now separate hemp from marijuana. George Weiblen, a professor with a joint appointment in the U of M’s College of Biological Sciences and College of Food, Agricultural and Natural Resource Sciences, said:

“It’s a plant of major economic importance that is very poorly understood scientifically… With this study, we have indisputable evidence for a genetic basis of differences among cannabis varieties, further challenging the position that all cannabis should be regulated as a drug.”

One of the under-appreciated benefits of hemp, at least in the US, is as a food source. Hemp seeds, which are technically a nut and are also known as “hemp hearts,” are rich in healthy fats, protein, and minerals.

Hemp seeds are usually consumed after the hard outer shell is removed, leaving just the soft, creamy “heart” behind. The seeds have a slight nutty flavor, making them incredibly versatile for use in cooking, baking, or for adding to smoothies and salads. Some of their primary health benefits include:8

Hemp seeds are composed of more than 30 percent healthy fats, including the essential fatty acids linoleic acid and alpha-linolenic acid (plant-based omega-3). According to research published in Nutrition & Metabolism:

“Dietary hempseed is… particularly rich in the omega-6 fatty acid linoleic acid (LA) and also contains elevated concentrations of the omega-3 fatty acid α-linolenic acid (ALA). The LA:ALA ratio normally exists in hempseed at between 2:1 and 3:1 levels. This proportion has been proposed to be ideal for a healthy diet.”

Hemp seeds also contain gamma-linolenic acid, which supports the normal function and growth of cells, nerves, muscles, and organs throughout your body.

Hemp seeds contain numerous heart-healthy compounds, including the amino acid arginine. L-arginine is a precursor to nitric oxide in your body. It has been shown to enhance blood flow and help you maintain optimal blood pressure. Nitric oxide signals the smooth muscle cells in your blood vessels to relax, so that your vessels dilate and your blood flows more freely.

This helps your arteries stay free of plaque. When you have inadequate nitric oxide, your risk for coronary artery disease increases. The gamma-linolenic acid found in hemp seeds is anti-inflammatory, another bonus for hearthealth. Past research has also shown hemp seeds may help reduce blood pressure, decrease the risk of blood clots, and boost recovery after a heart attack.

Fatty-acid deficiency can manifest in a variety of ways, but skin problems such as eczema, thick patches of skin, and cracked heels are common. Hemp seeds are a rich source of fatty acids in the optimal omega-6 to omega-3 ratio. Research suggests hempseed oil may improve symptoms of atopic dermatitis10 and potentially provide relief from eczema.

Although I believe protein from high-quality animal sources is beneficial for most people, if you are following a plant-based diet, hemp makes a healthy source of protein. With all of the essential amino acids and an amount ofprotein similar to beef (by weight), hemp seeds are an excellent form of plant-based protein.

Two to three tablespoons of hemp seeds provides about 11 grams of protein, complete with the amino acids lysine, methionine, and cysteine. Two main proteins in hemp seed protein, albumin and edestin, are rich in essential amino acids, with profiles comparable to soy and egg white. Hemp’s edestin content is among the highest of all plants. Hemp protein is also easy to digest because of its lack of oligosaccharides and trypsin inhibitors, which can affect protein absorption.

The gamma-linolenic acid (GLA) in hemp seeds produces prostaglandin E1, which reduces the effects of the hormone prolactin. Prolactin is thought to play a role in the physical and emotional symptoms of premenstrual syndrome (PMS). GLA in hemp seeds may also help reduce the symptoms of menopause.11

Whole hemp seeds contain both soluble and insoluble fiber, which may support digestive health and more. Soluble fiber dissolves into a gel-like texture, helping to slow down your digestion. This helps you to feel full longer and is one reason why fiber may help with weight control. Insoluble fiber does not dissolve at all and helps add bulk to your stool. This helps food to move through your digestive tract more quickly for healthy elimination.

Kentucky was once home to a flourishing hemp industry, but once hemp was outlawed, tobacco became the go-to cash crop. That is now slowly changing once again, as farmers take advantage of the five-year pilot IndustrialHemp Research Program, which was established by James Comer, Kentucky’s commissioner of Agriculture.12 The program is one recently launched in a number of states, where permission has been granted for industrial hemp to be grown for research purposes. As reported by Newsweek:

“Kentucky led the U.S. industrial hemp business until the end of the Civil War, when production of the crop declined and was generally replaced by tobacco. The Marihuana Tax Act of 1937 put the kibosh on all production and sales of cannabis, including industrial hemp, but the crop saw a rapid resurgence during World War II. Hempfiber became essential to produce military necessities such as uniforms and parachutes.

The U.S. Department of Agriculture launched its national ‘Hemp for Victory’ program, which provided seeds and draft deferments to farmers. In 1942, farmers planted 36,000 acres of hemp seed. A USDA-funded informational film from that year noted that ‘hemp grows so luxuriantly in Kentucky that harvesting is sometimes difficult.’”

Comer reportedly wants to “single-handedly turn industrial hemp into Kentucky’s No. 1 cash crop” and “breathe new life into family farms that have lost millions of dollars with the fall of the tobacco industry.”14 Currently, most industrial hemp comes from China, but the plant could bring great economic growth to areas of the US. Among the many products provided by industrial hemp are:

Hemp Could Provide an Environmentally Friendly Alternative to Plastic

Hemp plastic is a “material of the future” that could drastically cut down on the need for plastics and their devastating toll on the environment. In some cases, standard plastics may be reinforced with hemp, which may account for up to 80 percent of the plastic’s weight. Hemp can also be used to make 100 percent hemp plastic, which is recyclable and can be 100 percent biodegradable.

Currently, the most common type of hemp plastics are those infused with hemp fibers, which means less plastic is used and the resulting product is more durable (hemp plastic is said to be five times stiffer and 2.5 times stronger than polypropylene).15 According to Hempowered.com:

“Using sustainable and renewable natural plant fibers (such as hemp, flax, jute, and kenaf) and through industrial production techniques that mix them into plastics, a new award winning (Biomaterial of the year 2010) granule has been made from a combination of hemp with polypropylene, thus reducing the use of petroleum products.

… Their recoverable component comes from these natural plants and can make up over half of their weight, up to 80 percent. All these features make them suitable for the production of durable products. Hemp Plastic granules offer many advantages like good insulation, dimensional stability at high temperatures, a high thermal deformation temperature, and impermeability… The granules are currently produced for a range of applications in automobiles, construction materials, packaging, toys, and electronic products and launched onto the market in 2010.”

Hemp Could Soon Be Reclassified As an Agricultural Crop

Currently, hemp can only be grown in select US states for research purposes. However, even then the US Drug Enforcement Administration makes it challenging for growers. According to Newsweek:

“The DEA’s cannabis eradication program provides funding to local law enforcement to form a SWAT team of‘cowboys flying around in helicopters.’ They have been known to sweep through private farms to confiscate the plants, and have even been known to mistake okra for marijuana.”

A bill in Congress could change that as, if passed, it would reclassify hemp from a narcotic to an agricultural crop. Rep. Jared Polis (D-Colo.), a co-sponsor of the bill – the Industrial Hemp Farming Act of 2015 – told the Huffington Post:

“The federal ban on hemp has been a waste of taxpayer dollars that ignores science, suppresses innovation, and subverts the will of states that have chosen to incorporate this versatile crop into their economies… I am hopeful that Congress will build on last year’s progress on hemp research and pilot programs by passing the IndustrialHemp Farming Act to allow this historical American crop to once again thrive on our farmlands.” 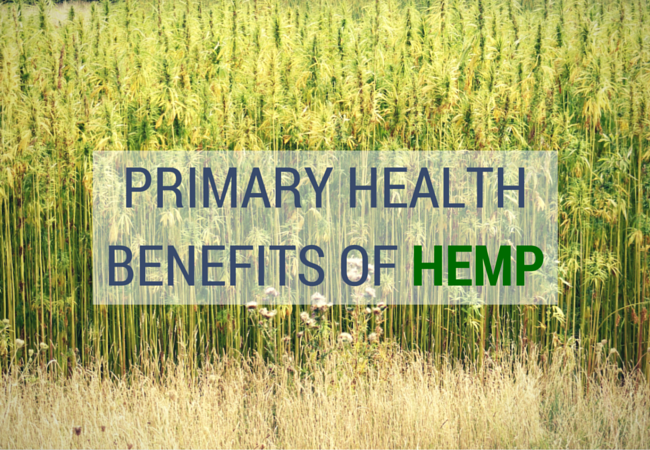