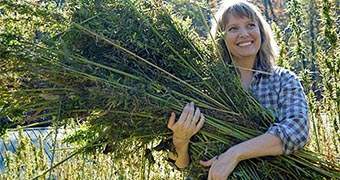 It looks like pot. It smells like pot. But it’s hemp, marijuana’s legal cousin, and it’s taking over the Bluegrass state.

Across the rolling hills of Kentucky, which just two decades ago was the most tobacco-dependent state in the country, farmers are planting less of the crop after growing health concerns shrunk demand. Instead, they’re increasingly turning to hemp and have more than doubled sowings of the cannabis variety in 2016 to become the No. 2 producer in the U.S., trailing Colorado.

Unlike marijuana, hemp is a variety of cannabis that won’t get you high as it contains less than 0.3 percent of tetrahydrocannabinol, or THC, the former’s psychoactive ingredient. Hemp can be processed into more than 25,000 products, and main uses include rope, linens food and personal-care products.

“The profit is promising,” said 32-year-old Giles Shell, who farms with his dad and brother on 200 acres 45 minutes south of Lexington, Kentucky. The family next year plans to dedicate 80 acres to hemp, land that for four generations was seeded with tobacco. “We’ve been willing as a family farm to be able to take this adventure.”

For the past several decades, there were strict controls on hemp amid anti-drug sentiment, making it illegal to grow without a government permit as the plant got lumped in with marijuana. In 2014, the U.S. farm bill authorized state agriculture departments to create industrial hemp research pilot programs, reopening production opportunities. Only 33 acres were planted in Kentucky that year. Seedings rose to 922 acres in 2015 and jumped to 2,350 acres in 2016, according to the state’s agriculture department.

That’s still a relatively tiny amount. By comparison, in 2015, Kentucky farmers planted 72,900 acres with tobacco, an annual U.S. Department of Agriculture report shows. Hay, the state’s No. 1 crop, was seeded on 2.37 million acres. Still, the state accounts for almost 25 percent of the 9,650 hemp acres grown nationally this year, data from the Hemp Industries Association show.

Changing national views on pot can also give hemp a boost. Voters in Washington and Colorado were the first to approve recreational use of marijuana in 2012. Now, eight U.S. states and the District of Columbia have moved to legalize, permitting a fifth of Americans to consume weed freely in their home states. The Colorado initiative also included legislation governing the cultivation, processing and sale of industrial hemp.

Hemp’s potential is huge, said Steve Bevan, the chief executive officer of GenCanna, a Kentucky-based industrial hemp grower that is extracting oil from the plant to use in wholesale and retail products. The company plans to boost its production to 500 acres in 2017, up from 100 this year, he said.

Kentucky’s first hemp crop was grown in 1775, and almost all of the nation’s production was grown in the Bluegrass region following the Civil War, according to the state’s agriculture department. The crop was included with federal legislation that outlawed cannabis harvesting in 1938, and output dwindled to practically nothing following the Second World War.

In contrast, U.S. tobacco farming started to climb in the early 1900s and topped 2 billion pounds in 1946 as cigarette consumption grew, according to the USDA. A federal quota system that supported prices ended in 2004 and national output dropped 3 percent in 2016, government data show. Kentucky remains the nation’s second-largest tobacco grower, trailing North Carolina.

Farmers are looking for alternatives as prices for other grains and commodities remain depressed and the tobacco market continues to decline, said Doris Hamilton, the industrial hemp program manager for Kentucky’s agriculture department.

Total retail sales of hemp products in the U.S. reached $573 million in 2015, according to the Hemp Industries Association. Sales by conventional retailers are growing. Products can now be found at stores such as Costco Wholesale Corp. and Target Corp. in addition to specialty retailers, said Eric Steenstra, the executive director of the industry group.

Most of the hemp products currently sold in the U.S. are imported from other countries and growers and processors have an opportunity to gain a foothold in the market as demand rises, Steenstra said.

Farmer Shell planted his last tobacco crop in 2015. His neighbors are also trying to grow hemp, which Shell plans to buy and resell to GenCanna for processing.

“There’s a lot of growers in this area that are trying hemp, and it all starts from the flailing tobacco market,” Shell said. “Hemp is taking off.” 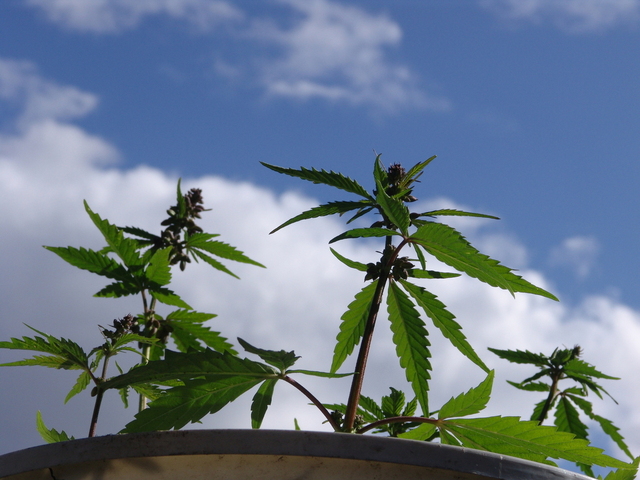