The agronomic and economic potential of industrial hemp, as well as the legal issues surrounding its production, will be the focus of a Purdue Extension field day Aug. 25.

Hemp, one of the world’s oldest cultivated crops, was once an important source of oilseed and fiber in the United States, where the hemp industry flourished for centuries until shut down by the Marihuana Tax Act of 1937. The 2014 Farm Bill legalized the growth of industrial hemp for research purposes, but the nearly 80-year freeze in hemp production has left information gaps on how to best produce the crop.

Purdue researchers have planted test plots of industrial hemp to help provide answers to basic questions of its production, such as the yields growers can expect, optimal soil conditions for hemp, which nutrients to apply, and how to identify and manage pests and diseases.

“This field day will allow the public to see hemp production firsthand – in one of the worst growing seasons in Indiana history,” said Janna Beckerman, professor of botany and plant pathology. “We’ve used our present experience growing hemp and years of additional experience with other cropping systems to inform our production practices. What we have learned sometimes conflicts with the ‘conventional wisdom’ found on the Internet, but we invite people to come see for themselves.”

The field day will be at the Meigs Farm, part of Throckmorton Purdue Agricultural Center. The farm is at 9101 S. 100 E, about 10 miles south of Lafayette.

Topics include how to plant hemp, pest management, harvesting, organic production of hemp, nutrient budgets and hemp’s uses. The Indiana Industrial Hemp Association will also give a presentation. Two identical half-day sessions will be offered – the first running 8:15-11:30 a.m. and the second 1-4 p.m.

Industrial hemp production still presents a legal tangle for would-be commercial growers. The plant Cannabis sativa is regulated under both federal and state law and is considered a narcotic by the U.S. Drug Enforcement Administration regardless of whether the variety is marijuana or hemp. While the Farm Bill modified federal law to allow licensed research institutions to grow industrial hemp and Indiana law changed in 2014 to allow hemp research, commercial hemp cultivation remains illegal.

But that will likely change, said Ron Turco, professor of agronomy and the assistant dean for agricultural and environmental research. Beckerman and Turco co-led the Purdue effort to obtain federal and state permits to grow hemp for research, as well as import and export permits from Canada, in anticipation of a future market for U.S. hemp. Also helping with the research are Kevin Gibson and Bryan Young of botany and plant pathology.

Hemp can be grown for its seed or fibers. The seed is a valuable source of oil and a good protein source for animal feed. The plant produces fine fibers suitable for textiles and rougher fibers that can substitute for fiberglass and building materials. The lower part of the plant consists of a tough material that can be used in products such as “hempcrete,” a cement mix that is strong, carbon dioxide-absorbent and recyclable.

The United States spends about $38 million a year on hemp imports for fiber and seed from China and Canada, and the value of all U.S.-based hemp products is about $600 million a year.

“Because of Purdue’ s long history of working with biobased products, we are really well-positioned to be a leader in helping to craft a market for hemp products,” Turco said. “We don’t yet know which varieties grow best or which soil conditions give the highest yields or the issues surrounding oil and fiber production. A lot of technical details still need to be worked out. But the fundamental research we’re doing will help provide quality information about the production and processing of industrial hemp.”

Turco emphasized that while hemp and marijuana are different varieties of the same species, hemp contains less than 0.3 percent tetrahydrocannibinol, or THC, the primary psychoactive ingredient chemical in marijuana. By comparison, marijuana can have THC concentrations of 18 percent to 38 percent.

“We need to eliminate hemp’s stigma,” he said. “It’s not marijuana. It has no psychoactive powers whatsoever.” 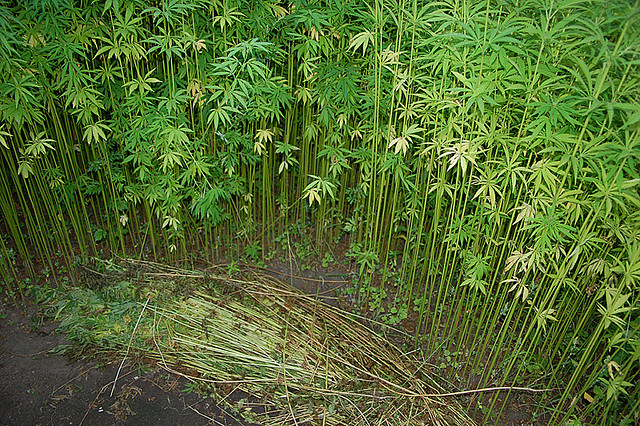