Indiana has tried for decades to eradicate a cousin of the marijuana plant.

But that long-time attempt has now come at a cost, as industrial hemp has the potential to become a new cash crop for farmers.

The Hoosier state’s reluctance to reconsider its attitude toward ditch weed also has it losing out on revenue and jobs to Kentucky and other states that have been quicker to give farmers permission to grow the crop.

Just ask Gregg Baumbaugh, CEO of an Elkhart manufacturer that spends hundreds of thousands of dollars each year on shipping expenses to import hemp and other natural fibers grown in Canada, Europe and Southeast Asia.

With Indiana still on the sidelines of the emerging U.S. industry, FlexForm Technologies could strike a deal to buy hemp from a newly launched Kentucky supplier. Such a move could sharply reduce shipping costs.

“I’d love for Indiana to process this stuff, but Kentucky isn’t that far away from us,” said Baumbaugh, whose company uses hemp and other fibers to make a lightweight material that looks like a floor mat. Suppliers for auto manufacturers – such as Ford, Mercedes and General Motors – buy sheets of the material, heating it up to be molded into door panels, trunk liners and other interior vehicle parts.

People won’t get high by smoking the so-called ditch weed because it has only a trace amount of the same psychoactive ingredient found in marijuana. But some lawmakers, among other concerns, have questioned whether hemp fields will make it harder to find real marijuana because it can sometimes be difficult to tell the two apart.

Kentucky is among only a handful of states that passed laws allowing farmers to get licenses from their departments of agriculture to grow hemp. To do so, they established research programs that fall within the framework of the 2014 federal farm bill. Other states, including Indiana, allow hemp to be grown and researched only by educational institutions, which is also allowed by the farm bill.

Though Indiana farmers can’t grow industrial hemp, its businesses can import it.

Hemp can be grown for its seed or fiber. Among other things, it’s used to make food products, clothing, paper, plastics and composite materials that can be found in skateboards, cars and aircraft bodies. In the grocery aisle, people can buy hemp oil, seeds and crackers.

Hemp is commonplace in northern Indiana, where it grows wild each year and has been difficult for authorities to eradicate. Its origin in the region goes back to the early 1940s, when the U.S. government planted it to aid the World War II effort. Its strong fiber material was used to make parachute cords.

Hemp can still be found amid farmland in the southwestern outskirts of South Bend. Local authorities have taken measures over the years to get rid of the plant, but they’ve largely backed off because getting rid of it is regarded as impossible.

Compared with cultivated pot, ditch weed has only a trace amount – less than 0.3 percent – of the psychoactive chemical tetrahydrocannabinol, or THC. It is often described as a cousin to marijuana – not an identical twin – because one can’t get high smoking it.

“You may get a headache or get sick, but you won’t get high. You may as well smoke a cornstalk,” said Jamie Campbell Petty, president of the Indiana Hemp Industries Association.

The federal government has classified hemp as a drug since the Controlled Substance Act of 1970. Hemp advocates want the plant to be removed from that list so that all U.S. farmers can grow it, but Congress hasn’t yet taken action.

She said that although Indiana has made strides to legalize hemp farming, its “ultra-conservative approach” has put it at a “significant economic disadvantage” compared to Kentucky.

Last year, Purdue University started a three-year research project to study how farmers can best grow hemp inIndiana soil. Test crops are being used to find out optimal soil conditions, which nutrients to apply and what yields growers can expect. The U.S. government is expected to give Indiana approval to grow hemp after the research is done.

But Campbell Petty said the research project has come at a cost: Indiana farmers are waiting on the sidelines while farmers are licensed to grow hemp in Kentucky, Tennessee, Colorado, Oregon and Vermont.

In contrast to Indiana, “states like Kentucky and Tennessee said: ‘We’re going to hold hands with our farmers and pass memorandums of understanding so they can start growing hemp.’ Purdue wanted to be more slow and conservative, but we’re in year two and they’ve barely expanded their research,” she said.

Campbell Petty said Indiana, which has an abundance of fertile soil to grow hemp, has allowed Kentucky to “take the lead in something that we would do much better in.” She said hemp would provide an alternative crop forIndiana farms of all sizes and attract new manufacturers to create jobs.

FlexForm’s Baumbaugh said that he can’t afford to wait several years for Indiana to start growing hemp. Each week the 34-employee company uses about 80,000 pounds of imported fibers including hemp, kenaf, flax and jute, which are blended with polypropylene to make its material.

Based on projected savings on international shipping, he said, FlexForm could save roughly $10,000 per week if it could buy hemp for a similar price in the U.S. In that scenario, the company would make most of its product for clients using hemp instead of other fibers. Auto manufacturers typically aren’t concerned about what type of fiber is used because their quality is similar.

FlexForm is interested in buying hemp from Louisville, Ky.-based Sunstrand, a processor of natural fibers launched in 2014.

Sunstrand’s CEO, Trey Riddle, said the company is now buying hemp from a handful of Kentucky farmers and can process up to 7 million pounds of hemp per year. In 2019, the company plans to expand its plant by adding a facility that would process an additional 44 million pounds per year.

Riddle said Sunstrand will need more production capacity to bring down the cost of hemp for FlexForm, which wants to buy fiber in high volumes at low prices. Currently, there is more demand in the U.S. for hemp to be processed into grain than into fiber.

“We could sell FlexForm material now, but I’d rather sell it to a higher-margin application because our production is limited,” he said, estimating that about 50 farmers are now growing hemp in Kentucky.

Riddle, who also serves as president of the Kentucky Hemp Industries Association, said Sunstrand is providing fiber on a trial basis to about a dozen manufacturers and is courting customers in several states. It is among several businesses that were launched in Kentucky to take advantage of the hemp law.

Indiana passed a law in 2014 that set the groundwork for hemp farming to begin, Campbell Petty said, but it won’t take effect until federal restrictions are lifted. Her association, meanwhile, is working with state lawmakers on a proposal that would allow farmers to get a jump-start on growing hemp in spite of federal rules.

“That would allow us to move forward – independent of federal requirements – early next year,” she said. 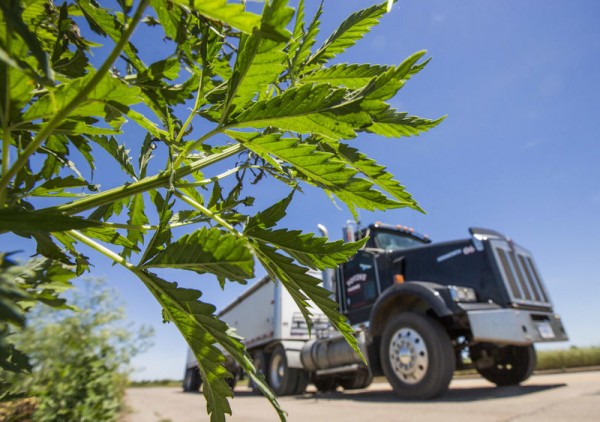