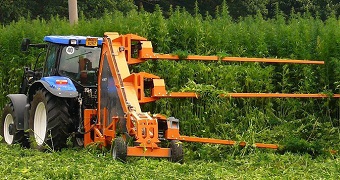 Senator Positive Nelson’s hemp bill, which was indefinitely tabled in the Committee on Rules and Judiciary in February, was given a different number and a new lease of life — along with some restrictions — and won the support of most senators at Wednesday’s session at the Earl B. Ottley Legislative Hall. Above, Mr. Nelson in Colorado visiting a medicinal marijuana cultivation garden in 2015.

Dissenters argued that the bill needed to be vetted as changes were made. But those in favor argued that the hemp industry bill had been heard on numerous occasions, and the latest version is merely an authoriztion that allows the University of the Virgin Islands to conduct research to determine the viability of establishing a hemp industry in the territory. The new version also states that the other sections of the bill must wait for the U.S. Congress’ approval before any action can be taken.

Mrs. Millin Young, who chairs the Committee on Economic Development, Agriculture & Planning, would not relent in her opposition. “If there are different things to be discussed [about the new hemp bill], it should be discussed in the committee of jurisdiction,” she said. “I’m really big on process, I don’t pick on people because of who they are. I believe that I’m consistent in the way that I carry out my business.”

But senator Myron Jackson, who said he had proposed a similar measure in a prior Legislature, said it was time that the territory move forward, and that the Virgin Islands was lagging behind other Caribbean islands that were quickly moving into the 21st Century.

“When are we going to sit on our own bottom? We have the ability to grow a product that is sustainable, and that can expand and diversify our economy,” Mr. Jackson said. “And as the world is evolving in different aspects, we too will evolve, but it shouldn’t be to our demise,” he later added.

Senator Nereida Rivera-O’Reilly, who has stringently opposed any measure having to do with marijuana or hemp, said there was no more fight left in her. “The fire in the belly, the desire to be a trailblazer to bring the house down, to inspire, to move people from one position to another, it’s gone. It’s been gone,” Mrs. Rivera-O’Reilly admitted.

The bill will now face Governor Kenneth Mapp, but with ten senators supporting the measure on Wednesday — the exact number needed to override a governor’s veto — Mr. Nelson’s hemp industry bill, though severely restricted, will most likely become law.