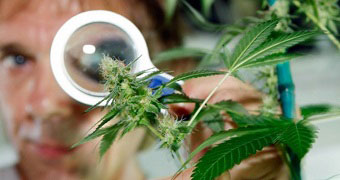 Marijuana is a plant containing a psychoactive chemical, tetrahydrocannabinol (THC), in its leaves, buds and flowers. Marijuana is the most commonly used illicit drug, with forty-two percent of American adults reporting that they have used it. Despite the fact that marijuana’s effects are less harmful than those of most other drugs, including alcohol and tobacco, it is the most common drug that people are arrested for possessing. U.S. marijuana policy is unique among American criminal laws in being enforced so widely and harshly, yet deemed unnecessary by such a substantial portion of the population.

Fact #1: Most marijuana users never use any other illicit drug.
Marijuana does not cause people to use hard drugs. Marijuana is the most popular illegal drug in the United States today. Therefore, people who have used less popular drugs such as heroin, cocaine, and LSD, are likely to have also used marijuana. Most marijuana users never use any other illegal drug and the vast majority of those who do try another drug never become addicted or go on to have associated problems. Indeed, for the large majority of people, marijuana is a terminus rather than a so-called gateway drug.

Fact #2: Most people who use marijuana do so occasionally. Increasing admissions for treatment do not reflect increasing rates of clinical dependence.
According to a federal Institute of Medicine study in 1999, fewer than 10 percent of those who try marijuana ever meet the clinical criteria for dependence, while 32 percent of tobacco users and 15 percent of alcohol users do. According to federal data, marijuana treatment admissions referred by the criminal justice system rose from 48 percent in 1992 to 58 percent in 2006. Just 45 percent of marijuana admissions met the Diagnostic and Statistical Manual of Mental Disorders criteria for marijuana dependence. More than a third hadn’t used marijuana in the 30 days prior to admission for treatment.

Fact #3: Claims about increases in marijuana potency are vastly overstated. In addition, potency is not related to risk of dependence or health impacts.
Although marijuana potency may have increased somewhat in recent decades, claims about enormous increases in potency are vastly overstated and not supported by evidence. Nonetheless, potency is not related to risks of dependence or health impacts. According to the federal government’s own data, the average THC in domestically grown marijuana – which comprises the bulk of the US market – is less than 5 percent, a figure that has remained unchanged for nearly a decade. In the 1980s, by comparison, the THC content averaged around 3 percent. Regardless of potency, THC is virtually non-toxic to healthy cells or organs, and is incapable of causing a fatal overdose. Currently, doctors may legally prescribe Marinol, an FDA-approved pill that contains 100 percent THC. The Food and Drug Administration found THC to be safe and effective for the treatment of nausea, vomiting, and wasting diseases. When consumers encounter unusually strong varieties of marijuana, they adjust their use accordingly and smoke less.

Fact #4: Marijuana has not been shown to cause mental illness.
Some effects of marijuana ingestion may include feelings of panic, anxiety, and paranoia. Such experiences can be frightening, but the effects are temporary. That said, none of this is to suggest that there may not be some correlation (but not causation) between marijuana use and certain psychiatric ailments. Marijuana use can correlate with mental illness for many reasons. People often turn to the alleviating effects of marijuana to treat symptoms of distress. One study demonstrated that psychotic symptoms predict later use of marijuana, suggesting that people might turn to the plant for help rather than become ill after use.

Fact #5: Marijuana use has not been shown to increase risk of cancer.
Several longitudinal studies have established that even long-term use of marijuana (via smoking) in humans is not associated with elevated cancer risk, including tobacco-related cancers or with cancer of the following sites: colorectal, lung, melanoma, prostate, breast, cervix. A more recent (2009) population-based case-control study found that moderate marijuana smoking over a 20 year period was associated with reduced risk of head and neck cancer (See Liang et al). And a 5-year-long population-based case control study found even long-term heavy marijuana smoking was not associated with lung cancer or UAT (upper aerodigestive tract) cancers.

Fact #6: Marijuana has been proven helpful for treating the symptoms of a variety of medical conditions.
Marijuana has been shown to be effective in reducing the nausea induced by cancer chemotherapy, stimulating appetite in AIDS patients, and reducing intraocular pressure in people with glaucoma. There is also appreciable evidence that marijuana reduces muscle spasticity in patients with neurological disorders. A synthetic capsule is available by prescription, but it is not as effective as smoked marijuana for many patients. Learn more about medical marijuana.

Fact #8: Marijuana has not been shown to cause long-term cognitive impairment.
The short-term effects of marijuana include immediate, temporary changes in thoughts, perceptions, and information processing. The cognitive process most clearly affected by marijuana is short-term memory. In laboratory studies, subjects under the influence of marijuana have no trouble remembering things they learned previously. However, they display diminished capacity to learn and recall new information. This diminishment only lasts for the duration of the intoxication. There is no convincing evidence that heavy long-term marijuana use permanently impairs memory or other cognitive functions.

Fact #9: There is no compelling evidence that marijuana contributes substantially to traffic accidents and fatalities.
At some doses, marijuana affects perception and psychomotor performance – changes which could impair driving ability. However, in driving studies, marijuana produces little or no car-handling impairment – consistently less than produced by low to moderate doses of alcohol and many legal medications. In contrast to alcohol, which tends to increase risky driving practices, marijuana tends to make subjects more cautious. Surveys of fatally injured drivers show that when THC is detected in the blood, alcohol is almost always detected as well. For some individuals, marijuana may play a role in bad driving. The overall rate of highway accidents appears not to be significantly affected by marijuana’s widespread use in society.

Fact #10: Roughly three quarters of a million people are arrested for marijuana each year, the vast majority of them for simple possession.
Police carried out 749,825 arrests of people for marijuana violations in 2012, according to the Federal Bureau of Investigation’s annual Uniform Crime Report. Marijuana arrests comprise nearly one-half (approximately 48 percent) of all drug arrests reported in the United States. Approximately 42 percent of all drug arrests nationwide are for marijuana possession. Of all the arrests made for marijuana violations in 2012, approximately 88 percent (658,231) were for possession only. The remaining 91,593 arrests were for charges of “sale/manufacture,” a category that includes virtually all cultivation offenses.