The question of whether CBD oil products being sold in Brandon are legal has not come with an easy answer.

On Monday, The Brandon Sun received an anonymous tip that a local head shop was selling an allegedly illegal product.

A trip to B.O.B. Headquarters to investigate the accusation that afternoon revealed that the products in question, Miracle Cannabis Oil and CBD Cannabidiol Gummies, were both available out of the back room when requested.

The question of their legal status was much harder to confirm, with legal experts and those charged with enforcing the law offering unclear and conflicting opinions.

After being sent a photo of these products, Brandon Police Service Sgt. Dave Andrew remained uncertain about their legal status, and said the department’s drug investigators were in the same boat.

Following discussions with the federal Crown and Health Canada, Andrew said they received direction that “as long as the product does not contain THC, then it is legal to sell.”

RCMP spokesperson Sgt. Paul Manaigre was also sent photos of these products and was unable to offer a definitive opinion regarding their legal status.

“I would almost have to see the items in person,” he said in emailed correspondence, adding that his guess is that these items would contain a small amount of THC, or at least some type of flavoring to mimic marijuana, which is where a legality issue would fall.

He recommended The Brandon Sun connect with the Canada Border Services Agency for additional clarity, but the agency did not respond to a request for information by press time on Friday.

After a couple of emailed responses that did not offer a clear answer, Health Canada senior media relations adviser Tammy Jarbeau confirmed that these products were not legal.

B.O.B. Headquarters co-owner Robert Ritchot said his take on the products’ legality is the same as Jarbeau’s.

“CBD products are essentially exactly the same as cannabis, so by selling CBD products right now it’s pretty straightforward; it’s not legal to do, no matter where that CBD is derived from,” he said.

This, he added, is why they have decided to not distribute the products throughout the province, despite there being an ample market for them.

At the same time, they are still selling them at their Brandon retail space.

“We feel very, very strongly for it,” he said. “It’s hard when you feel strongly for something and you know it’s generally accepted by everyone, even law enforcement.”

CBD, short for cannabidiol, can be found in both cannabis plants and hemp plants. Where THC is considered the plants’ psychoactive component, CBD doesn’t offer the “high,” and instead serves a wider swath of health-related purposes, including pain relief and reducing anxiety.

The products sold at B.O.B. Headquarters are derived from hemp, according to their labeling.

Their Florida-based manufacturer, Miracle Products, did not respond to a request for comment by press time on Friday.

Toronto-based lawyer Matt Maurer of Minden Gross LLP, who specializes in cannabis-related cases, said the ambiguity regarding these products’ legality stretches across the nation.

“There’s been a lot of confusion and uncertainty in general,” he said. “Up until legalization was coming out, the public in general wasn’t paying attention to what is illegal and what is not illegal.”

Although the legality surrounding cannabis-related products is ambiguous now, legalization of recreational cannabis, expected to take place this summer, should help clear things up, he said.

A cashier, who preferred her name not be used, said the product is utilized more for its omega contents than anything else, since its CBD levels are negligible.

Growers n’ Smokers owner Rick Macl said he sells hemp seed oil to be used with an infuser — a product that joins coconut oil, sunflower oil and various other options — in his shop’s apothecary section.

Products such as these are in a different ballpark than those that are marketed for their CBD content, which Macl said he will not sell.

In addition to their questionable legal status, he said there’s no point in selling them, since anyone with a medical prescription can obtain Health Canada-approved CBD oil through unquestionably legal online dispensaries.

The person who answered the phone at local head shop R.Dubz said that they did not carry CBD products, believing them to be illegal. 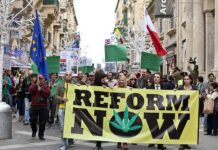 A History Of Activism In Malta

NY: Should Marijuana Be Legalized? Here’s What 2,000 Of Our Readers...