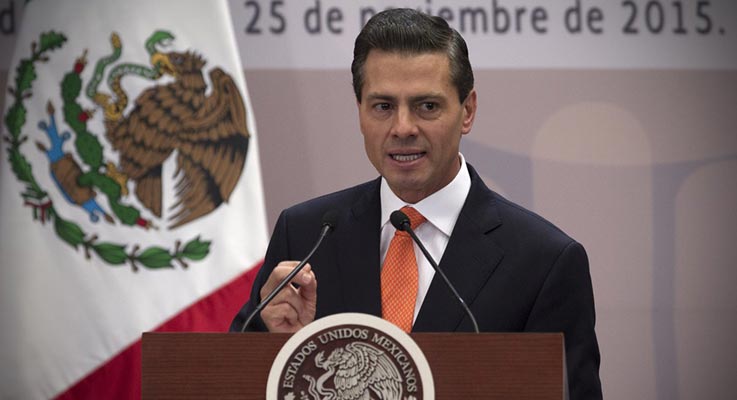 Mexican President Enrique Peña Nieto’s announcement Thursday that he will send a bill to the Senate legalizing medical uses of marijuana and increasing the amount an individual may possess, is a dramatic turnaround and may be a response to public support for medical marijuana, analysts said.

Individuals will be allowed to possess up to one ounce (28 grams) for personal use – up from 0.17 oz. (4.8 grams) previously – in an effort to “decriminalize” marijuana consumption, Peña Nieto said. The reforms will also free people on trial or in jail for possession of up to one ounce, the Mexico City daily El Universal reported.

Last December, Peña Nieto said he opposed relaxing the country’s drug laws as a way of reducing the power of organized crime.

He said at the time marijuana damages the health of children and adults and that he “would not put children’s health at risk to fight organized crime,” Bloomberg News reports.

A recently published international study found that heavy pot users face as many midlife problems as those dependent on alcohol.

The president’s about face on marijuana may reflect the fact that 64 percent of Mexicans in a February survey said they support its use for medical purposes.

At the same time, 71 percent of respondents said they were opposed to legalizing marijuana for recreational use, Francisco Abundis, associate director of the polling firm Parametria, said in Mexico City.

Abundis said Mexicans were watching the legalization of marijuana in some U.S. states and asking whether Mexico was paying too high a price in the war on drugs.

“Why are we paying the price when the U.S. has legalized marijuana?” he asked.

There are approximately five million marijuana users in Mexico, according to security specialist and national university professor Raul Guillermo Benitez. A large public consensus in favor of legalizing it for medical purposes makes it “practically a fact” in Mexico, he said.

Current federal law prohibits the production, sale and possession of the drug, although having less than five grams is punishable with only a fine, notes Carlos Zamudio, an investigator with a citizens’ group campaigning to change the drug laws.

According to student surveys, usage among 12- to 20-year olds has ballooned by 50 percent in the past decade, Zamudio said.

Organized crime is still the largest producer of marijuana in Mexico in spite of increasing production by smaller growers who are producing more potent strains in greenhouses and using specialized technology, he said.

Peña Nieto’s reversal on marijuana was made public in an address he delivered during the U.N. General Assembly’s special session on drugs (UNGASS) in New York this week.

Originally Peña Nieto said he would not attend UNGASS, a decision that drew heavy criticism, according to Edgar Cortez Morales of the Mexican human rights institute IMDHD.

Morales said the president’s stance on legalizing marijuana may have shifted as a result of public forums held in Mexico this year revealing strong support for medical marijuana.

If Mexico does legalize possession it will violate several U.N. narcotics treaties and conventions to which it is a signatory.

The treaties do not allow the regulation of marijuana for non-medical uses although, according to Martin Jelsma of the Transnational Institute, they do permit medical uses under certain conditions.

Jalsma said Chile, Colombia, and Uruguay are among Latin American countries that are signatories to the treaties but have legalized medical marijuana. Meanwhile, Colombia, Ecuador and Paraguay have decriminalized possession of small amounts, and Uruguay has legalized limited production and consumption.