Lynn Gibbs had a smile on her face as she entered the new Trulieve dispensary on Monday morning. For two years, Gibbs has used medical marijuana to help treat Crohn’s disease, a chronic inflammation of the gastrointestinal tract.

It’s working, said Gibbs, 62, who started treatments in Rhode Island where she previously resided and continued when she moved to Spring Hill.

“It put me in remission,” she said.

This is definitely more convenient, said Gibbs, who knocked 40 minutes off her round-trip drive. Add to that — no more tolls.

Gibbs’ response is on par with other customers, according to store manager Zach Evangelist, since Trulieve opened on June 6, moving into a storefront that used to be a barber shop and travel agency. More than 100 people lined up the first day before Evangelist unlocked the doors.

Many came for the special 25 percent discount, he said, a boon since medical marijuana is not covered by insurance. By day’s end, the store served some 300 customers.

“It was crazy,” said patient consultant Lisa Blustein. Business has been steady, with pockets of quiet, ever since, she said.

According to a press release from the Gadsden-based company, the state Office of Medical Marijuana Use recently announced the state had more than 112,000 registered medical marijuana patients, with the count growing each week. More than 1,300 ordering physicians are registered statewide.

The New Port Richey store is the 15th Florida location for Trulieve, filling a need for patients like Gibbs who had to travel to Hillsborough or Pinellas county for marijuana or pay a $25 delivery fee.

Clients previously treated by a state-certified physician check in with a consultant in what seems like a typical waiting room — except for the armed guard. One at a time, the guard escorts patients to a secure shopping area lined with display cases filled with products, plus an on-site ATM.

Six consultants serve clients, who range in age from infants to senior citizens and must have a “qualifying condition” by state law, Evangelist said. People spend from $25 to $300, he said, depending on their needs. Veterans and those on the federal Supplemental Nutrition Assistance Program get a 10 percent discount.

Trulieve is responsible for the products, “from seed to sale,” he said, noting that plants are harvested in north Florida. The shop has armed security around the clock at all locations.

Discretion is paramount, said Evangelist. Only legally approved clients are allowed into the consulting/shopping area. Trulieve offers in-store recycling for clients who do not want to discard oral syringes, vials and packaging in their own trash.

“A lot of Pasco is happy we’re here, said Evangelist. He also has seen several clients from the Brandenton location he previously managed.

“For a lot of people, this is their last stop,” he said, because they are seeking an alternative to pharmaceuticals they were addicted to. “So they’re happy to be getting a natural product.”

More local dispensaries may be coming. In April, Trulieve filed a lawsuit against the state Department of Health, asking a judge to exempt the Gadsden-based company from a provision in a 2017 law that limits each business to no more than 25 medical marijuana dispensaries.

A win for Trulieve would be good news for clients like Gibbs, who would like to see a dispensary in Hernando County.

“This is great, but it’s still not as close as in Rhode Island,” she said. “That dispensary was only eight minutes from my house.” 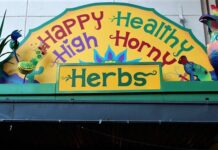 Arizona One Year On