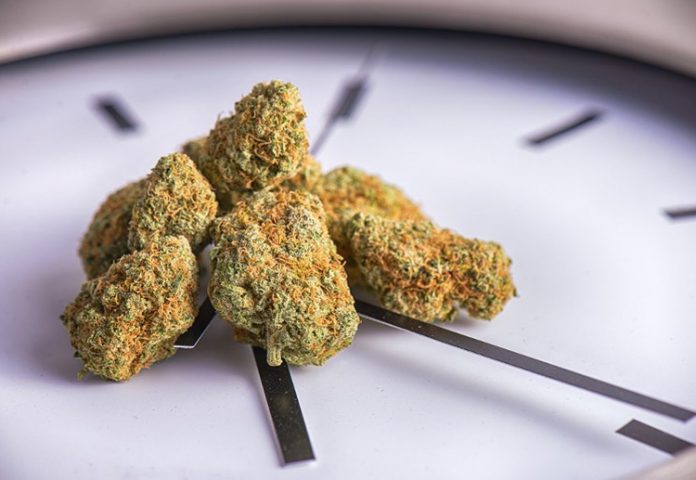 While Grand Rapids residents voted more than five years ago to decriminalize possession of small amounts of marijuana, city officials are still taking a “wait and see” approach to allowing medical marijuana facilities.

Medical marijuana advocates say it’s the wrong direction for Michigan’s second-largest city as others move forward, while one city commissioner says he is “baffled” by the city’s lack of action.

“I’m a little miffed by it, to be honest,” said First Ward City Commissioner Jon O’Connor, who represents the city’s west side. O’Connor says he wants to have a discussion about a policy to regulate medical marijuana facilities, but that he hasn’t gotten “reciprocal interest” from the rest of the commission.

“I don’t know what the hang-up is,” he said. “We at least owe it to the public to have a discussion about our feelings surrounding medical marijuana. Just not saying or doing anything is a little disingenuous.”

Grand Rapids is one of at least six municipalities in West Michigan that has effectively opted out of allowing medical marijuana facilities under the 2016 Medical Marijuana Facilities Licensing Act passed by the Legislature.

With a regulatory framework now in place for medical marijuana businesses to operate, municipalities can decide how they want to regulate them, or pass “opt-out” ordinances to keep them out. Doing nothing is effectively the same as opting out.

The city’s position comes as communities large and small adapt to the new legal framework around marijuana, but it falls behind other cities that are being more proactive in allowing the businesses.

Grand Rapids Planning Director Suzanne Schulz says it would be up to the City Commission to take up discussions and formally adopt a policy. However, the timing is not “ripe” for that given potential changes on the horizon, particularly the likelihood of a ballot initiative to legalize recreational marijuana in the November 2018 election, she said.

The city had also been waiting for the state Department of Licensing and Regulatory Affairs (LARA) to issue emergency administrative rules for facilities, which were released in December.

“It’s an interesting time because things are moving so fast and we want to make the best possible decisions for neighborhoods and business districts,” Schulz said.

While Grand Rapids has not adopted a formal policy based on the new law and regulations, Schulz said the city is going off of a 2010 ordinance that allows medical marijuana caregiving as a home occupation. That ordinance also prohibits dispensaries from operating in the city, she said.

Grand Rapids’ ban on dispensaries stems from an opinion by Attorney General Bill Schuette that such facilities were operating illegally under the Medical Marihuana Act passed by voters in 2008, Schulz added. Some cities — such as Lansing, Detroit and Ann Arbor — have allowed dispensaries to operate. To move forward, Schulz said the City Commission would need to initiate a policy discussion with the community.

“I don’t think we’ve really heard from the community yet on this issue,” Schulz said. “We need to have some debate. Because it’s a new industry … we’d want to start off slow and cautious to understand it better and how it works in Grand Rapids, but it’s up to the City Commission.”

Although O’Connor characterized it as a lack of priority among other commissioners, he said the state has an “established framework” to work off. If necessary, the commission has the power to adapt its policies based on changes in state law.

“We should be trying to get out in front of this,” O’Connor said. “Rather than be reactive in the event that marijuana is legalized, we should be testing a framework.”

Medical marijuana supporters say allowing such businesses not only gives safer access to cannabis for those who need it, but also it can be an economic boon by providing jobs and tax revenue. Also, cities like Lansing and Detroit have been working for months on local regulations in light of the new state law. Muskegon and Kalamazoo are also looking at ways to regulate such businesses.

For Grand Rapids to not prioritize the issue and sort out regulations is “the exact wrong decision,” said Tami VandenBerg, a local business owner who is also on the board of directors of MI Legalize, a group pushing for the ballot initiative to legalize marijuana for recreational purposes.

“I strongly think we should be opting in. When you travel around the state, you can see other communities are just light years ahead of us on this,” VandenBerg said. “Being the second-largest city and being a leader on other issues, it’s incredibly disappointing this isn’t a priority for them.”

VandenBerg, who helped deliver legalization petitions in Lansing in November, said MI Legalize is working on policy templates for communities to use as they address the issue.

“Every community is different, but we’re working on some basic recommendations on how many dispensaries there could be based on population,” she said.

VandenBerg is also executive director of Grand Rapids-based Well House, a nonprofit that provides shelter and housing for the homeless. She says there are strong social justice components to progressive marijuana laws, which have disproportionately affected people of color and low-income residents.

“I’ve been hearing from patients who are driving to Lansing because they can’t find a caregiver,” she said. “People are driving an hour to get legal medicine, people that might not have very many resources. It’s not only a massive economic opportunity that could benefit so many of us through taxes and job opportunities, but it’s also a matter of equal access.”

Schulz responded that Grand Rapids patients “still have access to medical marijuana, they just have to find a caregiver. Lansing is not that far away, and we do allow caregivers in the city. I haven’t heard people going to the City Commission saying they can’t get marijuana.”

In passing the Michigan Medical Marijuana Facilities Licensing Act in 2016, the state took a major step forward in creating a regulatory framework for the medical marijuana industry.

On Dec. 15, the state began accepting applications for licenses to operate five different types of facilities: provisioning centers, grow operations, secure transportation, testing and processing facilities. Municipalities from small villages to major cities have the option of whether they want to allow such facilities and how many, or to prohibit them.

The Royal Oak-based Cannabis Legal Group lists five additional nearby townships — Alpine, Plainfield, Algoma in Kent County, Wayland in Allegan County and Ensley in Newaygo County — that have opted out or are likely to. Around the region, the city of Norton Shores, Comstock Township, South Haven Township, the village of Douglas, and Otsego Township were listed as likely to opt out or had already taken action to do so, according to Cannabis Legal Group.

As of Dec. 29, LARA received 82 applications for facilities, 68 of which were for “pre-qualification,” which allows the state to do background checks until the facility is approved locally. Six applicants are seeking licenses for a provisioning center, three for a processing facility and another five for growing. Harns said another 208 applications have been started online but haven’t been completed. LARA expects to start issuing licenses later this year.

Roberta King, co-owner of West Michigan-based Canna Communication, is helping applicants through the pre-qualification and licensing process. In municipalities across the state, she sees the need for more education about the industry.

“We lay out what I would say is an education and calming strategy to get people to look at this in a logical and reasonable manner,” King said. “People still get very excited about cannabis, and not in a good way. If you look at where communities have opted out and how they’ve opted out, it could be that they feel threatened by it.”

King added that opting in “is truly a zoning issue,” which gives municipalities a choice in how many facilities to allow and what type. Crockery Township west of Grand Rapids adopted an ordinance last year allowing one growing facility and one provisioning center.

“Just because you opt in doesn’t mean you have 500 dispensaries,” King said. “For us, it’s a process of educating and trying to get people to understand the lack of threat from this business. But it’s difficult — people have hard-wired opinions and ideas about cannabis they can’t let go of.”

O’Connor agrees that the issue is about land use and zoning. He wonders if certain medical marijuana businesses could be limited to areas zoned for manufacturing or retail.

“This doesn’t seem that complicated to me,” he said. “I don’t know what the unfounded fears are surrounding its place within our business climate or business corridors.”

Schulz maintains that the city’s current approach isn’t permanent, but more of a “holding pattern.” She added that it would be a waste of staff resources and community input to pursue an issue that’s not ready to be taken up by the City Commission.

“I wouldn’t say we’re opposed to anything, but it’s not quite ripe yet for that conversation,” Schulz said, referring to the potential for legalized recreational marijuana. “There’s also a sense that there’s no reason to jump the gun and get right into this until we know what we’re looking at and what’s the best approach for the community.”

VandenBerg counters that adopting local regulations for facilities would be a “fantastic mid-step” before legalization.

“Starting now would give a lot of local people a head start to get businesses going,” she said. “It’s just a lack of leadership, a lack of courage. It’s not easy to make a big impact — there are going to be risks and some people won’t be happy — but that’s what leadership is about.”