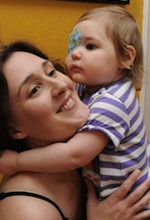 The Scotch Plains family whose fight to get medical marijuana for their toddler has drawn national attention, received a $10,000 donation on Christmas to help them relocate to Colorado. The donation to the Wilson Family of $5,000 each came from MagicalButter.com, a Washington state company that manufactures cannabis-infused edible products and the machine that extracts the plant’s active ingredients, and Lisa and Drew Braun, friends of the company’s CEO, Garyn Angel said.

Angel and his friends made a YouTube video informing them about the donation, and enlisted a Wilson family friend to pay them a visit Christmas Day and videotape their reaction. Both are seen crying and laughing. “How’s that for a little stress relief?” Brian Wilson asked his wife, Meghan. Brian Wilson said they are overwhelmed by the generous gift that will enable them and their two daughters in early 2014 to move to Colorado, where an edible form of marijuana is manufactured and has helped relieve the seizures in children with serious epilepsy disorders.

Their youngest daughter Vivian, 2 years old, has from Dravet syndrome, a potentially deadly form of epilepsy that traditional medicine has been able to control. They also have a daughter, Adele, who is 4. “The contribution will relieve a lot of the financial stress this move was going to place on us,” said Brian Wilson, who lamented that the Christie administration’s rigid medical marijuana program is unable to help them yet. “Christie’s policies are forcing us to flee the state and become medical refugees at a great personal expense. Through their great generosity, MagicalButter and the Braun family are relieving us of most of the financial hardship that comes with a forced move.”

After Wilson confronted Gov. Chris Christie at a campaign stop pleading to not let his daughter die, the governor signed a law that allowed growers to manufacture edible products for children and expand the number of strains that may be grown. But growers and the Christie administration are months away at least from producing and testing an edible product to replicate the kinds of successes seen out west. A new bill is pending to require New Jersey recognize other state medical marijuana programs, in order to help families use products here grown elsewhere, but Christie has said he will not consider future expansions of the law, fearing it is just a step toward legalization.

“In true New Jersey fashion, Christie has made Vivian Wilson ‘born to run,’ ” said Wilson, referencing the signature song by the governor’s favorite performer, Bruce Springsteen. Angel said he created the company last year and has tens of thousands of customers, who are mostly middle-aged to elderly and have from Crohn’s disease. A machine he invented breaks down the plant and extracts an active ingredient, cannabidiol, that is showing success in reducing the severity and frequency of seizures.

Angel said he learned about the family’s plight on the web, donated his extraction machine, and decided to visit about three weeks ago. He doesn’t have any child customers yet. “They are trying to do everything on their own, but we wanted to help,” said Angel, whose friends from Tampa, Lisa and Drew Braun, contributed to the Wilsons despite having never met them. “The world is pulling for you guys,” Angel tells the Wilsons on the video.