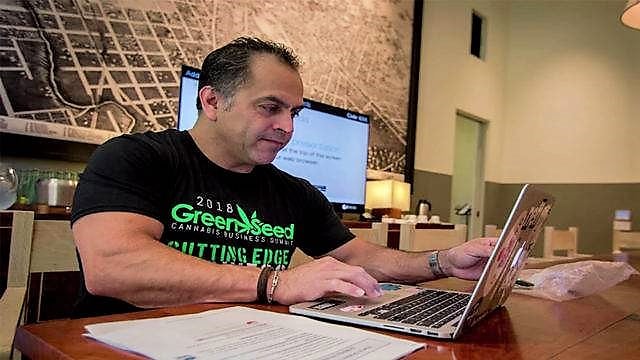 Marijuana may be illegal in Texas, but one group of entrepreneurs is making its mark in the cannabis space in San Antonio.

Rick Martinez, founder and CEO of the accelerator program, said once recreational or medical marijuana becomes legal, whether at the federal level or at the state level, the participants of the accelerator will be 10 steps ahead of those who want to enter the industry after it has been legalized.

“It’s an accelerator program, a lot like what people think of incubators or traditional accelerators. The distinction is that we serve only the cannabis industry,” Martinez said. “It’s beyond just growers and retailers. It can be folks in the marketing aspect, maybe some sort of product creation company, but they have to be serving the cannabis industry.”

Martinez said he wants to help 1,000 cannabis entrepreneurs by 2025, but with the major growth of the industry, he projects that number will be a lot greater.

“One thousand, at this point, I think it’s too low a number because the industry is so explosive right now,” he said.

So how does one become part of the program?

“First of all, they have to be in the business. If they’re in the idea phase, then they’re not ready for us yet,” Martinez said.

The applicants apply for the program and then answer a questionnaire, which Martinez said is a screening tool for the accelerator. He said it causes the entrepreneur to think about what their business is and can become.

Of all places where cannabis is legal, why San Antonio?

“I look at it with several different lenses. One of them is as a straight-up entrepreneur. As an entrepreneur, what we, by design, want to do is find the gap or the opportunity and see if there’s a need that we can fulfill,” Martinez said.

“The opportunity here to expand a footprint is easier than in Los Angeles or Seattle or Massachusetts, where it’s now becoming more prolific,” he said.

Martinez calls San Antonio a blue ocean. He said a red ocean is where cannabis is already legalized and more accepted, and all the businesses are fighting for market share.

“Nobody expects it here, and I believe that’s been one of the main reasons for our very early success,” he said. “Entrepreneurship 101. Find the blue ocean. Establish a footprint. Build something the market is craving or needing. Fill a gap, and here we are, right in the middle of Texas.”

Martinez said he and his partners tapped into their network of cannabis entrepreneurs in Texas and across the U.S. to let them know about the accelerator program and to test it out.

“What we did is we launched a half-day, deep-dive strategic planning session for cannabis business owners, and then we set a goal. We set a simple goal and we held it in downtown San Antonio,” Martinez said.

He said they received “a fire hose of strategic information and then actionable items they can take into their business the very next Monday.”

Green Seed Cannabis Business Accelerator enrolled six companies right away, and it now has a waitlist of four other companies. Martinez said the reason for the waitlist is to be able to serve the currently enrolled businesses better.

Martinez plans on reopening enrollment in September to give more cannabis businesses the chance to grow.

What do entrepreneurs get when they join Green Seed Cannabis Business Accelerator?

“We accelerate their growth in a responsible and in an authentic way, mostly because the industry is misunderstood. So we want to make sure that they grow in a way that supports the greater good and also supports their pocketbook,” Martinez said.

He said the accelerator’s participants maintain communication through an online private group. A few times out of the month, the businesses have group calls that provide an agenda and training.

“We will give them real-life strategic planning,” he said.

Martinez said that along with the plethora of information the businesses receive, the actual cannabis community is the beauty of what the program is about.

“What makes us the most unique is the community of cannabis entrepreneurs who are there underneath this umbrella of core values, supporting each other’s growth,” he said.

Martinez said after the half-day seminar, they collected feedback from the participants.

“Some of the feedback from the participants of that day was that they now have the beginnings of a strategic roadmap,” he said.

He said some of the other feedback included the participants saying they no longer feel so alone and are glad they found a group of cannabis entrepreneurs in their city.

Martinez said he and his team want to share their message that cannabis is good and that it has a massive potential in the business world.

Talk Hustle Connect’s name is based on a play of words. Tetrahydrocannabinol, or THC, is the principal psychoactive in marijuana that produces the feeling of being high.

Martinez said this conference is different than others in the sense that the booked speakers will be telling their stories from the edge. He said the emphasis of the conference is to connect.

He said attendees will be able to connect with the speakers and ask them questions about their experience in the cannabis space.

“We’re not gearing it only to the cannabis entrepreneur. I believe our largest audience is the person who is canna-curious,” he said.

Martinez said he wants people who have a negative view of cannabis to attend in order to educate themselves on the benefits of the plant.

How Hard Is It To Get A Medical Marijuana Card In...