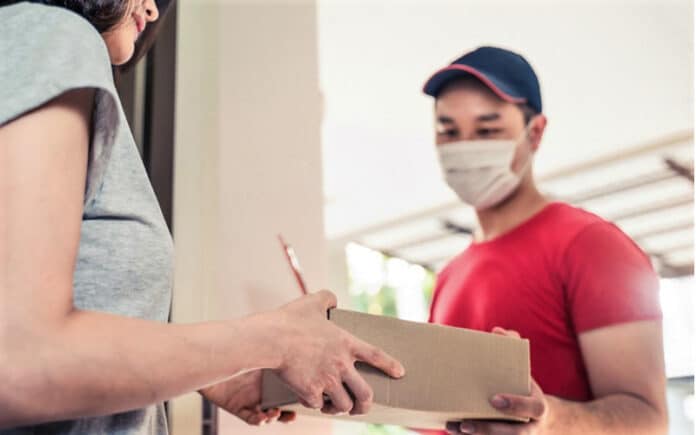 Legal and illegal cannabis sales have spiked, even though doctors warn that smoking and vaping worsen symptoms and spread. These businesses face a new problem: keeping employees safe.

While millions of Americans are at home, socially distancing to curb the spread of the coronavirus, fleets of men and women head out daily to make deliveries. Some drop off groceries and medicine, while others hand over marijuana strains of blue dream or sour diesel.

In over a dozen states, marijuana dispensaries and pot shops have been deemed essential services and remain open through lockdowns, and illegal deliveries are also on the rise. This worries medical experts, who say smoking and vaping damage the lungs, worsening symptoms and helping to spread the virus. The cannabis trade faces a new problem: keeping employees safe from the virus.

“Our business doubled: Every day is a Friday,” said the owner of Jack Flash, a cannabis delivery service in New York City, who spoke on the condition of anonymity because the sale of recreational marijuana is illegal in New York. “It’s just been really nonstop.”

Jack Flash employs a team of seven to deliver cannabis products to customers across all five boroughs of New York City from 10 a.m. to 11 p.m. daily. Customers find out how to place an order by word of mouth. There is only one rule: Buyers must retrieve their product and complete the transaction in the car, the owner said.

“Some people now don’t want to get in the car,” he said. “Obviously we don’t want to do a hand to hand out the window, it just looks crazy.”

While the delivery staff attempts to conduct business as usual, save for wearing gloves and masks, customers have started to ask to pay using peer-to-peer apps like Cash App and Venmo instead of cash.

The Jack Flash delivery staff tries to enforce the rule of completing transactions only in the car, and they also wash or sanitize their hands often and clean the surfaces of the vehicle as a precaution, the owner said.

Bud.com, a delivery service that operates in Northern California — where selling marijuana is legal in some cities and towns — experienced a 500 percent increase in sales after lockdown orders in mid-March, according to Dean Arbit, the chief executive of the company.

The service has enabled its drivers to do touch-free deliveries by not handing products directly to customers, but instead leaving them at the doorstep at a safe distance, Mr. Arbit said.

But those protocols may not be enough to keep delivery workers safe from the coronavirus, said Curtis Gardner, 26, a driver for Bud.com.

“A lot of people aren’t practicing space,” Mr. Gardner said in an interview. “I’d be lying if I said I thought that I would be 100 percent OK dealing with all of these people and going to their houses.”

Mr. Gardner has developed a delivery routine during the pandemic: First, he lets the customer know he is on the way. When he arrives, he puts on a fresh pair of gloves and a face mask. After he tells the customer he has arrived, the buyer will usually head to his car to pick up the order.

He asks for identification. If the customer pays with cash, he folds the money and puts it in a bag. If it is a card transaction and a PIN is required, he hands the customer the card terminal. He then hands over the purchase and removes his gloves.

The risk appears, he said, when the customer does not respond to his messages and he must go to the front door. But he said most customers stand a distance away.

Initially Mr. Gardner was apprehensive about making deliveries during the pandemic, but he soon noticed that many of his customers were also taking precautions.

“It is comforting to know that other people are ready and willing to make this transaction as safe as possible,” Mr. Gardner said.

Uncle Ike’s, a dispensary in Seattle, where marijuana was legalized in 2014, isn’t making deliveries, but the influx of customers in the shop puts its staff members, or “budtenders,” at risk of contracting the coronavirus.

“People were lining up to make sure that they were able to get what they could,” said Jesse Huminski, 30, the regional manager at Uncle Ike’s. “There were people ordering $500 and $700 worth of product. It felt like we were doing black Friday business on a Monday.”

Uncle Ike’s asked employees to wear gloves and masks and spaced out customers inside the store to help prevent anyone from getting infected.

“We are doing everything we can to ensure the safety of everyone coming in and out,” Mr. Huminski said.

Jack Flash delivery workers are still finding safe ways to loosen the strict rules that are in place to keep them from being detected by the police, the service’s owner said.

“I have done a couple where I’ve left it in their mailbox and they’ve left money in the mailbox,” the owner said. “I’ve done two or three like that.”

Some deliveries have been made using the “hand out the window” method, but Jack Flash’s owner has warned his staff not to get arrested. There are fears of a potential health catastrophe in New York City jails, where thousands of people are held in close quarters.

“That’s kind of a death sentence right now,” he said.