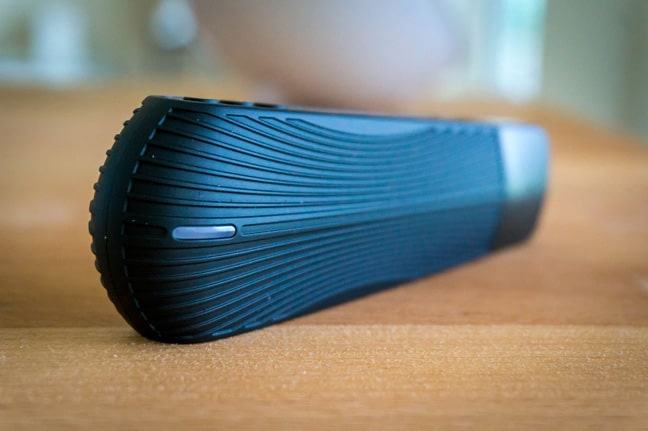 If you know anything about Boundless as a brand, you’ll know that they’re known for their affordable vaporizers and quality designs. Their CFX vaporizer is already popular, however it is too big to use while on the move. That’s where the Boundless CFC comes into play. Designed to meet the needs of vapers who are looking for a portable solution, the Boundless CFC won’t disappoint thanks to its travel-friendly, compact size. Despite its diminutive dimensions, it boasts sufficient versatility, power and customization options to ensure it can meet the requirements of even the most demanding vapers.

A Hit And Miss Design? 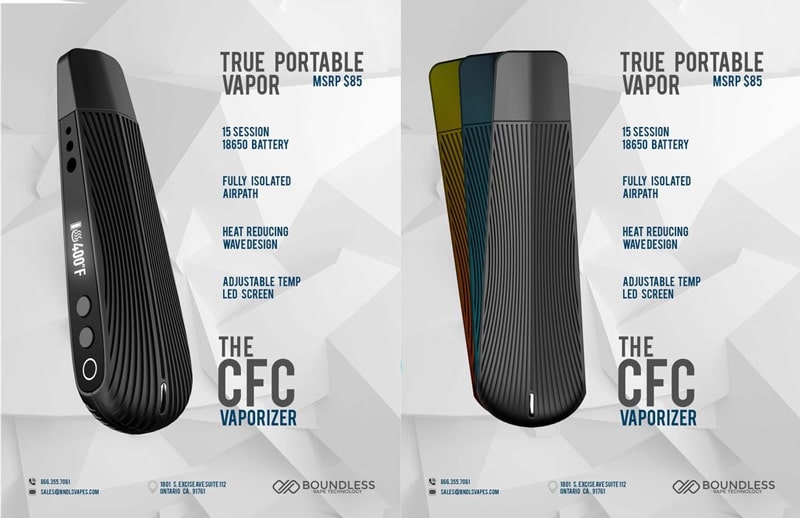 No vape is entirely perfect, and despite its sturdy construction, the Boundless CFC vaporizer has a plastic body which may reduce its durability. Although the medical grade materials used for its construction have been vigorously tested, there is a plastic mouthpiece which is known to heat up if vapers prefer high temperature vaping because of the relatively short vapor path. For people who prefer cooler vapes, this may not be the ideal experience. On the other hand, the facility to switch between Celsius and Fahrenheit is a pretty rare feature, particularly on vaporizers coming in at this affordable price, and goes some way towards making up for the drawbacks.

The Boundless CFC boasts a comprehensive temperature range, from just 100 degrees C up to 230 degrees C. It also has a large heating chamber holding as much as 0.5g of dry herbs, and this means that this is a pretty versatile and flexible device.

When it comes to convenience and operation, the Boundless CFC won’t fail to impress. It has a visually appealing and easy to read LED display which allows the user to customize their temperature settings, and the overall appearance is stylish. Loading the chamber is a breeze while there is absolutely no learning curve involved in getting to grips with this vaping device.

Flavor And Vapor
If you prefer to vape at a low temperature but still expect to see huge clouds, you probably won’t have a particularly good experience with the Boundless CFC. Its vapor clouds are thin and wispy when the device is used at low temperatures, however the flavor is impressive and is sustained as the temperature increases. This device is therefore best for those who prefer moderate temperatures for vaping due to the plastic mouthpiece which heats up during use and due to the poor vapor clouds which are emitted at lower temperatures.

How Discreet Is The CFC?
Another top selling feature of the Boundless CFC is its discreet appearance. As the most discreet vaping device from this brand, the CFC can easily be used while out in public and no unwanted attention will be attracted. Yes, there is an LED screen, but it is quite low key so won’t draw any undue interest from passers by. Its stubby, compact design allows this vaporizer to be hidden easily in the hand, and its small dimensions means that you can easily pop it into a pocket without it being too obvious. All of this adds up to a fantastic travel vaping device that has been specifically designed for use by those who prefer to vape outside the home. One issue which is worth noting, however, is that the plastic mouthpiece is relatively delicate and could break while being transported from A to B.

What About Battery Life?
Even though the Boundless CFC is a small device, its battery life is surprisingly long. It can last for up to 5 vaping sessions (around an hour of continuous dry herb vaping), and this competes surprisingly well with many of its larger rivals. On the downside, however, the battery cannot be removed, and therefore charging has to be done through the device itself. Charging is relatively quick and convenient, but as the battery isn’t interchangeable there will inevitably be some downtime. This may not be the device for chain vapers.

Should I Buy The Boundless CFC?
The Boundless CFC represents great value, and when compared to many other vaporizers in its price point it is certainly one of the best options. It is an ideal first vape, or the device for someone who wants a simple but quality vaping experience. The Boundless CFC really comes into its own as a portable device, and this makes it a wonderful proposition for anyone who is looking for a device to take on vacation or to carry while outside of the home. It’s not a great choice for anyone who loves cloud chasing, but for those who favour flavour over vapor production, the Boundless CFC could hit the spot. It’s a perfect device for anybody who prefers cooler vapes and with its reasonable battery life and sturdy construction, it represents a solid choice for beginners are more experienced vapers alike.