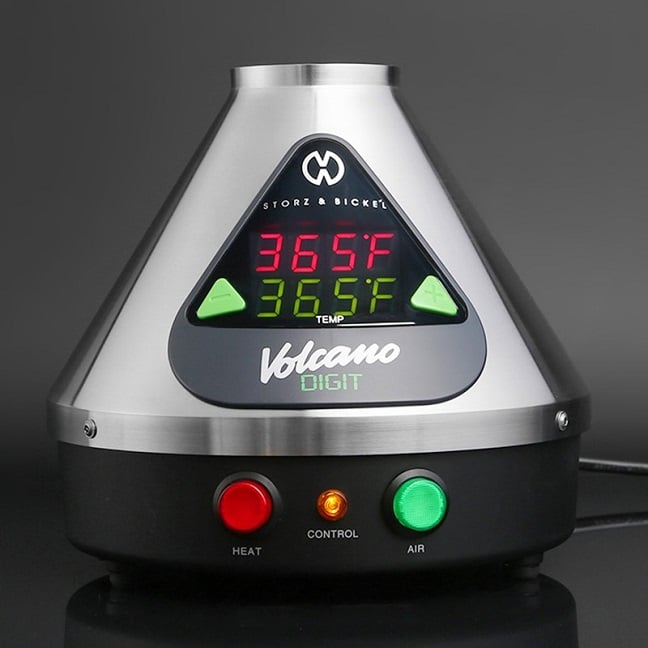 Created by one of the biggest names in the vaporizing industry, Storz & Bickel, Volcano Vaporizers are known for being robust, durable, and reliable, which is everything that you want from your desktop vaporizer.

After building the first factory in the world for manufacturing medical herbal vaporizers, Storz & Bickel are based in Tuttlingen in Germany which is called the ‘center of medical technology’ due to the fact that there are over 500 medical device manufacturers there, which means that they are in good company and more than qualified to make amazing vaporizers.

This is also the location of the first factory to produce surgical instruments over 150 years ago, so what better place to make one of the most popular oil and dry herb vaporizers?

But our question is why are Volcano Vaporizers still erupting in 2018? We look at some of their best features to find out.

The Volcano Vaporizer
The Volcano Classic Vaporizer is just one of the models made by Storz & Bickel and is very popular due to its sleek cone-shaped design which you will be proud to have on show as it looks good on any desktop, and its patented technology which eradicates the harmful toxins produced through combustion giving you safer and purer vaping sessions.

This technology also means that the effects of the active ingredients are intensified by around 75% which give the user a greater hit than they would get when using an alternative desktop vaporizer.

Volcano Vaporizers have been created to be accessible to everyone, no matter how much vaping experience they have, and produce a clear and pure vapor with a great flavor. These vaporizers are also very easy to clean and maintain which is just another reason for their success and has helped them to gain recognition as one of the best desktop vaporizers on the market.

With an LED display that allows you to see the temperature, and gives you control over it, you will also be shown an approximate heating time so you can be very precise about the heat that you want it to produce. This model can reach temperatures of between 104 – 446 Fahrenheit and its initial heating time is a mere 3 minutes which means that you won’t have to wait long before you can use it.

In addition to this, the Volcano Digital has a function which enables you to easily fill a balloon with vapor which can then be stored for up to 8 hours, so you can use this model in a group or solo depending on your preference. This makes it even safer to use as you vape away from the device meaning that you will have no contact with heat or electricity while you are inhaling.

Measuring just 18cm x 19cm x 1.98cm, this vaporizer is also portable as it can be carried in a backpack should you want to take it out of the house with you. Plus, with a weight of only 1.8 kilograms you won’t feel like you are carrying around a massive piece of equipment while you are out and about.

The Volcano Digital has only two buttons which makes it very easy to use and will heat your herb at a consistent rate which means that you will benefit from a great flavor. It also boasts smart valve technology, so you won’t burn your herbs, an automatic shut-off feature, and a built-in air filter; plus, if subtlety is what you are looking, for then the Volcano Vaporizer’s quiet motor won’t disappoint you either.

Whether you are looking for a desktop vaporizer that is technologically advanced like the Volcano Digit, or a simpler model that is just as effective, you will certainly be impressed with the results produced by one of Storz & Bickel’s Volcano Vaporizers.

By looking great, being easy to use and maintain, emitting vapor that is both tasty and pure, and being small enough to carry around if needed, it’s unsurprising that the Volcano Vaporizers are still erupting in 2018, and we expect them to continue being just as popular and remain many people’s desktop vaporizer of choice for years to come.