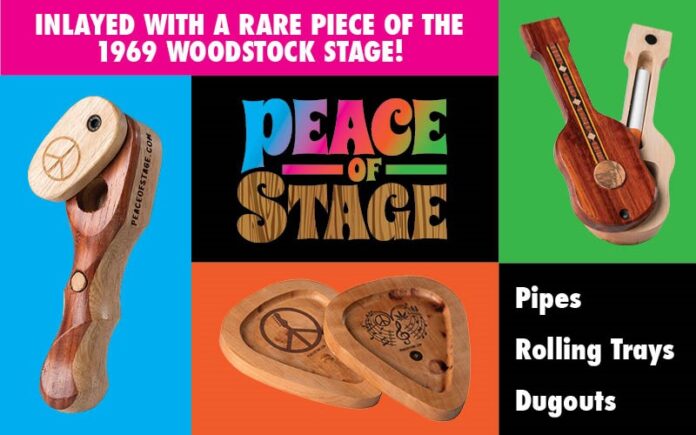 Please join us in welcoming our new sponsor, Peace of Stage, to our mission of spreading Cannabis awareness to the world.

The story of Peace of Stage is an extraordinary one. It is best told in the words of its founder, Steve Gold.

“In August 2017, I had a flashback to the Woodstock festival. It took me back to when I, Steve Gold, was just a teenager when I attended. Like everyone else who went, there’s no surprise it left a lifelong impression on me. I can safely say it’s crossed my mind often, way more than the once yearly celebration of its anniversary.

“I’d been thinking about the four days of the concert and everything that took place to ready the site, as well as its upcoming 50th anniversary. Then I remembered something that happened soon after the festival ended and everyone went home except for those of us who lived in Sullivan County, NY.

“The father of my girlfriend at the time asked me to help unload plywood panels from his truck. His family owned a bungalow colony not far from where the concert was held on Max Yasgur’s dairy farm in Bethel. While helping him move the plywood, I asked where he got it. He told me he’d just bought the plywood panels that had been the main stage! It was right after Labor Day 1969 and the summer rental season had ended. I was stunned that these panels, upon which just a few weeks before the greatest festival in rock and roll had taken place, were going to be inconspicuously used to renovate and build a sports complex with a paddleball court at a bungalow colony.

“48 years later and inspired by my festival flashback, I decided to visit what had been the Robi-Lane Bungalow Colony to see if the paddleball court was still there. A friend joined me for the drive and we walked around the grounds. As we were about to leave, we spotted the white painted wall of the paddleball court, partially hidden in the overgrowth.

“When we got closer, we saw the unpainted sides with the same types of markings as the familiar stage. Some panels had sections painted yellow, green, and purple and others had the plywood manufacturer’s stamp.

“After my discovery, I needed to get confirmation of what I found. Even though we hadn’t spoken in decades, I reached out on social media to my former girlfriend and asked if I could call her about the bungalow colony. As soon as I mentioned the paddleball court, she replied it had been built with Woodstock stage panels. Subsequently, she wrote a letter, which described her family’s purchase of the panels.

“I was so excited about my finding that I approached the new owners of the bungalow colony and asked if I could buy the panels used for the paddleball court. They were curious about my request but agreed to sell them. I took samples to a wood specialist, who I hoped could authenticate the plywood. He recognized the markings, and verified when the panels were made, and where they were used!

“I began talking about ways the panels could be used to commemorate Woodstock, and two of my friends became extremely interested. Dave Marks and Randy Garcia are rock and roll fans too and even though they weren’t at Woodstock, they’re equally fascinated by its impact on music and people. In fact, Randy Garcia nicknamed his daughter “Jerry” in honor of Jerry Garcia, one of Woodstock’s legendary performers.

“The three of us became partners and formed Peace of Stage LLC.

“The majority of the panels are part of our Peace of Stage Collection. However, we’re greatly honored to have donated pieces to the Rock and Roll Hall of Fame, the Grammy Museum, and the Museum at Bethel Woods.”

For 420 Magazine to continue offering our free service we rely on like-minded sponsors such as Peace of Stage, to whom we are truly grateful. Please support our Mission by supporting them. Our sponsors make 420 Magazine possible.